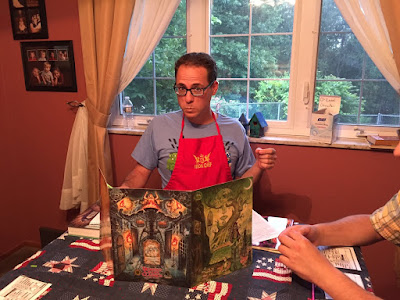 Since the beginning of the Living 4 Crits blog I've wanted to tell the woefully short tale of "Kid Wizard", my very first tabletop role-playing game character.  I'm still not sure why it's taken me so long to write about my first experience with an RPG, especially since I hear so many gamers on podcasts share their own first times.  Actually, given the way the whole experience turned out you'd think I never would've returned to the table.

It helps that I had an extremely talented Dungeon Master.

It all started twenty-five years ago, with a simple game of Dungeons & Dragons.  Chuck, my Dungeon Master To-Be, was a year older than me and lived across our street in Levittown, Pennsylvania.  Growing up, Chuck was a natural leader and organizer, always gathering the kids on our block into various activities.  If there was football being played on "The Hill" (the mound surrounding a local drainage ditch), Chuck was arranging teams.  If street hockey was on the menu, Chuck provided the net and all the pads.  Of the eight boys who lived on the lower end of Handy Road, Chuck was the group's ever present event planner.

I need to point out that Chuck's parents had an extremely high tolerance to loud kid voices.  Their house was always filled with children of all ages, pretty much taking over their living room, den, kitchen, bedrooms, and backyard.  I don't know how they put up with us all.

My dates may be a little shaky, but sometime between the winter and spring of 1991 Chuck started talking about something called "RPG".  Not "an RPG", or "the RPG", just "RPG."  At first I thought the game had something to do with "rocket propelled grenades", probably because of my overexposure to Rambo movies.  I blame '80's cinema.  Eventually this conversation led to the arrival of a mysterious red box...

Word got out that some of the other kids, including Chuck's two younger brothers Jeff and Chris, were "making characters" for this game.  Naturally I wanted to be a part of the group, so I scheduled some time to sit down with Chuck and create my first character.

Okay, at the time this was probably just me walking over and asking to make a character, and then his mom telling me to come back later, but in my mind I will always remember "being summoned" for that very special moment.

Chuck's house had a den in the very back, with a bunch of comfy couches.  That's where Kid Wizard was born!  The name sparked a bit of an argument because Chuck insisted that I couldn't be a "kid" if I were a Magic-User.  I would need a long beard and a pointy hat.  My counter argument was probably rooted in Dungeons & Dragons cartoon series, and Presto the Magician.

Here's all I remember about Kid Wizard's stats:

Being able to speak Pixie confused the heck out of me.  In my twelve year old mind Pixies were a combination of the fairies from The Legend of Zelda and Popples.  The starting spell also kind of stunk, especially when I realized that I could only cast it once per day.

Really?  I'm a great and powerful sorcerer with one spell that I could cast once per day?  What good is throwing my voice going to be?

Chuck assured me that I would be the most powerful character on the entire block, because no one else was playing a Magic-User.  But this would take time, and I'd need to attain a bunch of levels before attaining true mystical might.

Character creation was quick, and Chuck's dad wasn't finished cooking dinner, so he offered to run me through a short session to try out the rules.  Here's my attempt at an adventure recap of something that occurred back in 1991.

The Legend of Kid Wizard

At first he was disappointed, but then Kid Wizard thought up a plan.  The young Magic-User grabbed the silver dagger from the weaponsmith's hand and bolted out of the shop.  But before he could make it to the nearby alley, Kid Wizard heard the weaponsmith shouting.

Sure enough a pair of guards saw the young pilferer and gave chase.  But Kid Wizard was prepared for this.  Using his trusty Ventriloquism spell, Kid Wizard mimicked the voice of the weaponsmith from behind the two guards.

One of the two guards fell for the spell, but the other continued to chase Kid Wizard.  Eventually the guard reached the Magic-User, and cut him down with a single blow of his long sword.  Kid Wizard died, still clutching his beloved silver dagger.

It took a few months to get back to Chuck's table.  It wasn't long before he purchased the AD&D 2nd Edition rulebooks, which quickly became our game of choice.  My second character was a Paladin, who would die on the Isle of Dread, sacrificing himself to save the life of my friend Ryan's Thief.  I would play in Chuck's games up through high school, returning during the summer of 1998 for a reunion game using characters that we had played for years.  To this day, some of my fondest memories as a D&D player come from sitting in Chuck's upstairs bedroom during an all-nighter, battling the minions of evil until the early hours of the morning.

Chuck's red box would eventually make it into my hands, and I remember first running D&D sessions during the summer of 1991, overly-inspired by the blockbuster hit Robin Hood: Prince of Thieves.

Chuck was also my first player.  He gave me tips and pointers on how to run my own adventures, and over the years would share some of the materials he would amass from our local hobby store Allied Hobbies at the Oxford Valley Mall.  I was allowed to use his bookshelf as an occasional library, checking out a rulebook or copy of Dungeon Magazine to help further my craft.

I will be forever grateful for that very first invite to join Chuck's D&D game.

I've participated in countless tales told around a small table with a only handful of dice and a small stash of gnarled books and discarded soda cans.  I've met creative, thoughtful, and downright legendary game designers who have shared their own stories and experiences.  Most importantly, I've shared this storytelling art form with my children, and continue to watch them make it their own.  Hours upon hours of experiences and memories that would never exist if I hadn't rolled up one single, crappy, dagger-wielding Magic-User in Chuck's family's den.

So Chuck, just in case you're reading this, thank you.

Thank you for bringing me into the fold twenty-five years ago, and for inspiring me to create my adventures.  I just have one question that remains after all these years...

... couldn't you let me start with a better spell than Ventriloquism?
Posted by Living 4 Crits at 6:08 PM