Creating my Gods of the Fall Character 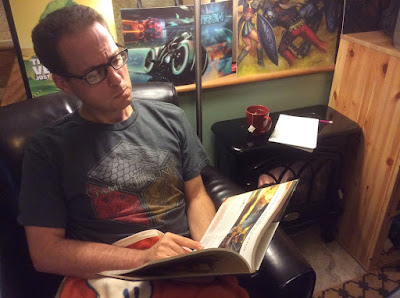 Are You a God?

Last week I did a cover-to-cover read through of Gods of the Fall, the brand new Cypher System campaign setting written by +Bruce R Cordell, as preparation for this past Sunday's Cypher Live show.  I spent several nights in my family room with a full cup of tea, flipping through page after page of this exciting new setting book, thinking about all of the possibilities that cool godlike characters would have in the Afterworld.  Typically when I read a setting book, I'm crafting campaign design ideas... but not this time.

I wanted to play this game!

Lucky for me, my good friend and Cypher Live co-host +Marc Plourde scheduled a one-shot to playtest an adventure that he's throwing together for Gods of the Fall.  I promised that I wouldn't include any spoilers in this blog post, so you'll just have to keep a lookout for a future module by Marc.  So no adventure recap or review.

But I do want to talk about the character I built:

A Beneficent Savior who Shepherds the Dead, God of Death (Tier 2)

(GM's Note:  Yes, Sinuba is just an anagram of "Anubis".  Also, if this were a movie, I'd see this character played by the Indian actor Ayeshka Dharker from Outsourced and Doctor Who: Planet of the Ood.)

I've always been fascinated with the idea of benevolent, "good-aligned" death deity, so that was my inspiration for Sinuba.  Sinuba's divinity was revealed to her after dying and immediately returning to life.  She plans on using this second chance to restore Soulrest to a place of eternal rest for those souls who peacefully lived out their lives in the Afterworld.

I thought the Savior type would be the best build to create Sinuba, especially with its emphasis on social interaction abilities.  I didn't want Sinuba to shy away from combat when necessary, but she believes that violence should always be a last resort.  This is also reflected in her Beneficent descriptor.  Sinuba strives to help others complete their journeys in the Afterworld, and impart upon them wisdom, understanding, and car.

But note my phrase "complete their journeys."  I used Beneficent as a death god's descriptor, but then again, death is just another natural part of life.  Sinuba doesn't see anything wrong with pointing out that people die, often to people that completely fear the process.  So her idea of being "beneficent" can sometimes come across as being morbid and cold.

Mechanically Beneficent allows Sinuba to help out her "pantheon" (it ain't a "party" when your a bunch of gods) both in and out of the action.  After spending a full day with Sinuba, other player character's get a boost to their Recovery Rolls.  In addition, Sinuba can always help someone as if she's trained in a skill.  The downside to Beneficent's many perks is that all Speed and Intellect tasks are one step more difficult when she is alone.  For most of last night's game she hung out with +Jeremy Land's Champion.


As a Savior with the Shepherds the Dead focus, Sinuba needed a lot of Intellect, and some Intellect Edge, to power her abilities.  In combat I figured she'd stand back and use a bow, so having some additional speed could be useful later on.  I wasn't worried much about Might, but I'll share why in a few moments.

Since we started at Tier 2, I had an additional 4 stat pool points to distribute, as well as another point of Intellect Edge.

Type Abilities
Being the talker of the group, I wanted Sinuba to be able to handle difficult social challenges through various techniques.  Saviors start with Enthrall, and Erase Memories comes in handy during covert activities.  Sinuba gained training in pleasant social interaction as part of being Beneficent, so Interaction Skills made her specialized in this task.  Also, any good death god needs to understand how the dying process works.

While I didn't see Sinuba as a front line fighter, I still wanted her to be able to handle herself in combat.  Practiced With Light and Medium Weapons combined with Practiced in Armor allowed Sinuba to take up Katar (light weapon) and Shield, wearing a suit of Plate Mail armor.

I wanted to give her a medium melee weapon, but I ran out of purchases!

Focus Abilities
Again, I can't spoil last night's game, but I can say that both of these Focus Abilities came in handy.  Question the Spirits allows a player character to ask questions of a dead soul, so long as the character has a piece of their body or one of their possessions.  Spirit Accomplice grants the player character a Level 3 soul to command.  Most of the time I used this Spirit Accomplice to dash forward and make it easier for Sinuba to hit her foes with arrows.

Dominion Abilities
I used Manifest Nimbus just one time to make a grand entrance in front of some NPC's, but never got around to trying Self Aware.  Sorry, can't comment much.

Divine Shifts
Sinuba may only have 8 point of Might, but she is hard to kill!  My God of Death can don a Shroud of Repose, effectively donning a suit of spiritual armor created out of the souls that wish to aid their future Queen of the Afterlife.  Mechanically this gives Sinuba three additional points of armor, and three Power Shifts of Might Defense (essentially three free levels of effort.)

So that's my Gods of the Fall character.  Thanks again, Marc, for running such an amazing adventure last night!

If you've created your own gods already, please share them with me  I'd love to see your own creations!