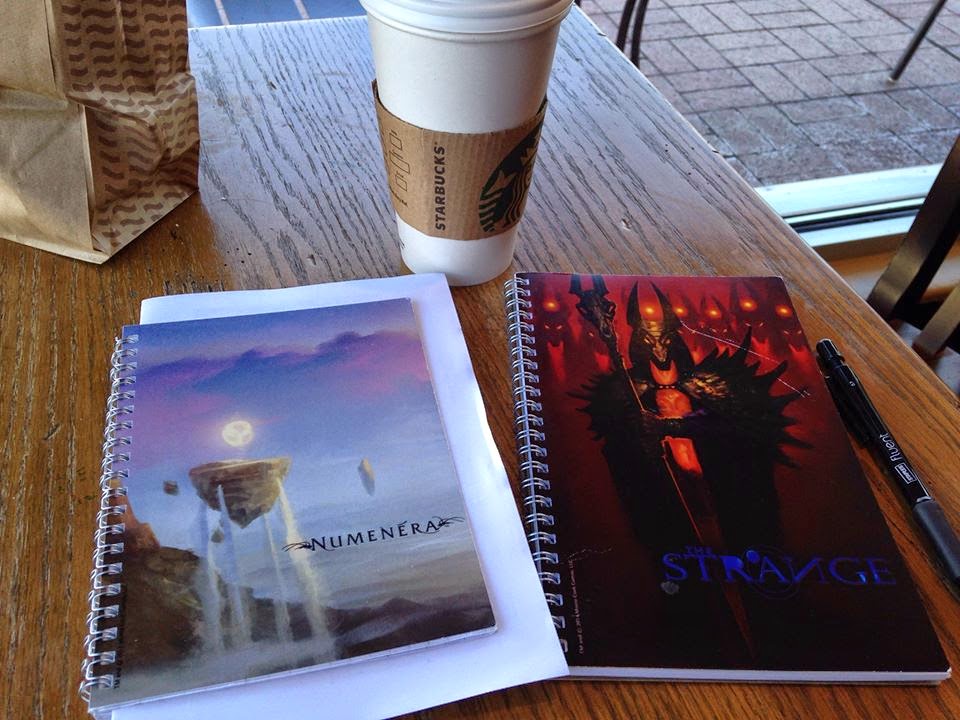 Spending Effort All the Way to the Finish Line


This last session of Quattro con Carnage continues using Numenera and The Cypher System.  It has been a long and crazy trip through these four systems, and I'm about spent.  I enjoy game-mastering all of these terrific systems, but switching every two weeks is quite challenging.  If there is one regret that I have through the experiment, its my handling of experience and advancement.

My initial plan was to track these characters from system to system and see how they changed and evolved as the rules switched.  But attempting to have characters at roughly the same power level for eight adventures didn't allow us to look at natural advancement.  Over the course of eight games the characters progressed as follows:

Umbrin, played by Jeremy
A guard-for-hire from Tannryth once in the employee of a wealthy Archon

Jorin Everlast, played by Craig
A pilfering initiate to the Embrace who just "made bones"


Hit Me Baby One More Time


The stairs leading out of the Lost Chasm were long and winding, working their way up through stone and soil.  It was a grueling ascent, lasting hour upon hour.  Occasionally the steps would break into an open cavern, but after several minutes of searching, they continued on the other side.  Eventually this route led to a dead end, a simple wall made of large stone blocks.  Rydian examined the stones, and realized that there was a small gap allowing light to enter the chamber from the opposite side.  Using his spell of Cutting Light, the elf started to cut one of the blocks free but stopped abruptly.

Someone was on the other side of the wall!

Peering through a small hole now cut into stone, Rydian saw a large underground temple.  A raised platform stretched one-hundred feet from one side of the temple to the other.  Below the platform lay thirty piles of fresh soil, each marked with a single gravestone.  The voices were coming from the opposite side of the chamber, where seven blue-robed monks were softly chanting to the sleeping gods.

Rydian proceeded to carve away one of the stones, and broke it open on the floor.  Inside was a perfectly round ball of obsidian, well balanced from the Cutting Light spell.  Grabbing the orb, Lomman carefully took a spare wooden rod and affixed the stone to one end…

… and so we have the origin of the Gavel of Night Justice.

[GM's Note:  Gavel of Night Justice, Artifact, 5 damage, if the user spends any effort on additional damage, they may choose to have this damage affect another creature in the room instead of the target.  Depletes 1 on a d10]

After dealing with dire halflings, a blizzard, an ice demon, and fleshy ghosts, Umbrin, Lomman, Rydian, Jorin, and Drogos weren't going to let a bunch of cultists stand in their way to freedom!  The team readied their gear, and charged through the wall prepared for action!  But as the party broke free, Umbrin looked back and saw a statue was that of a demonic seahorse.

"Stop!" Umbrin shouted to everyone, friend and foe alike.  "We come from Magrizt!"

This gave the monks a pause, and so one stepped forward.  He introduced himself as Xivit, and asked to speak with the leader of the party.  Given his status as a priest, Lomman the crusader approached the cultist, still clinging to his weapon and shield.  Xivit asked to take Lomman to his leader.  Lomman could keep his weapons, and the rest of his party would not be harmed.  This seemed reasonable, so Lomman agreed and followed Xivit to the next chamber.

Xivit introduced Lomman to Thonathan, likely the most affable cultist ever to exist in Tannryth.  Thonathan explained to Lomman that his coming was part of a prophecy handed down for centuries.  The blizzard, the trek to the Lost Chasm, Sashiria, and the statue of Magrizt, this was all foretold on an old scroll.  Lomman seemed somewhat skeptical, but when he read the document for himself it was all there… including a short passage on the awakening of Magrizt.  Thonathan seemed absolutely tickled about the last part, especially since the party came with the "sacrifice", the "one who cannot die."

The prophecy seemed to infer that Drogos the death-dodging dwarf would need to be sacrificed to Magrizt for the awakening god to return to Tannryth.  Actually, it went further to state that the result of the sacrifice would somehow imbue Drogos with godlike powers in the end.  Thonathan offered Lomman the opportunity to discuss the prophecy with the rest of the party, and give Drogos the choice of whether or not he would submit himself to the cult of Magrizt.  The cult leader even gave some wine and sausages to Lomman to take back to his party.

Thonathan had no fear of being double-crossed, for everything was foretold!

Surprisingly, Drogos seemed rather open to the idea of being sacrificed.  The dwarf had proven himself curious to the point of having a death-wish, so this situation was no more different than others.  After taking a few minutes to think the whole process over, and asking several times how much being sacrificed would hurt, Drogos agreed!  The dwarf was led to the area near the base of the statue of Magrizt and the rest of the party was offered a place to watch the rebirth of a sleeping deity.

The process started with Drogos being given the "Juice of Thirty" to drink, a concoction created from the bodies of thirty dead dwarves now buried in the temple.  This caused Drogos to sway back and forth in a dream state and eventually vomit up some of his own organs.  Then an ethereal Magrizt came from out of the statue, and tore Drogos' soul away from his body.  Drogos' body slumped over as the soul was tossed aside.  Once Magrizt took physical form, as a thirty food tall, serrated claw wielding demonic seahorse, he consumed the dead body of Drogos and started eating the cultists!

Well our brave adventurers weren't going let some poor, kindly cultists get killed without dishing out some revenge on the demonic seahorse that ate their friend's soul!

Lomman let loose with a holy smite against Magrizt's corporeal form while Umbrin drew his battle axe and charged the terrifying creature.  Meanwhile Rydian and Jorin stood back and let loose with spell and arrow.  While Jorin's missiles struck true, Rydian's cutting light had no effect on the terrible monstrosity.  Realizing that he was facing multiple dangerous attackers, Magrizt belched a scalding mist amongst the group.  This attack didn't repel the warrior and cleric, who were still hacking away.  Umbrin's axe eventually started hitting bone, so Magrizt changed tactics.  The awakened god focused all of his attacks on the warrior, knocking Umbrin to his knees in less than a second.  While Lomman tried to heal Umbrin, Ryidan started blasting the ceiling above Magrizt's head, causing large blocks to rain down and smash the demon's skull.

The party wasn't sure how much more they could take before their numbers would start to dwindle… and that's when they heard a familiar voice.

The bellowing shout came from the far side of the temple.  It was a massive dwarven form, twelve feet tall, with shining gold skin, standing completely naked.

"Drogos!" the party exclaimed together.

While he was "dead", the souls of the thirty dead dwarves, and all of their own ancestors, were transferred to Drogos giving him incredible power.  With a twinkle in his demi-godlike eye, Drogos leapt across the chamber, and started raining heavenly pain upon the demonic seahorse.  But Drogos' actions were not without ramifications to the rest of his former teammates.  The brilliant golden light of Drogos crashing against Magrizt's red, seahorsey energies caused ripples of destruction that harmed everyone else in the room.

Enough was enough!  Umbrin wasn't going to let a common, dwarven blacksmith turned demigod take the credit for sending Magrizt back to his slumber.  The human warrior hefted his battle-axe for what could've been the last time, and threw all of his weight behind one final blow.  The axe struck true!  Blood and viscera splashed all about Umbrin, and Magrizt groaned in pain…

… but he still towered over the warrior, standing strong…

… and then a block of stone struck Magrizt in the head…

In the end Rydian, the valiant elven spell caster, figured out that while Magrizt was resistant against his cutting light, stones blocks cut free by the spell were quite effective against the demonic seahorse's noggin.  Pragmatism trumped valor, as a long sleeping deity returned to a dream state once again.  While Lomman helped the party heal, everyone looked at Drogos wondering what he was going to do.

The ancestor spirits possessing Drogos were giving him a choice.  The dwarf could embrace his status as a new god of the dwarves, or he could return to life as a revenant.  Drogos chose to be the first god of the dwarves, and bid his party goodbye as the ground began to rumble.  As the temple crashed about them, the team ran outside dodging stone and column.  Once outside, everyone turned, and saw the gargantuan structure fall apart, with only one form left standing:

An obsidian statue of a giant naked dwarf.


"So we are sitting around eating shawarma?" - Craig, after Jim said that the last session was taking place in the end credits

"Did you say happy as a clam or happy in a clam?" - Marc doesn't know clam from oyster.

"Maybe we should just smash through the wall and say 'oh yeah!'" - Marc was preparing for a frontal attack.

"Apparently Ogmios felt bad for being such a dick last week." - Jeremy may have been right.

"Dwarves are your friends… not food." - Andreas was hoping to make a case with the cultists.

"I'm right here, guys!" - Drogos didn't like the party talking negatively about him.

"As long as its not painful…" - Drogos was all in to be sacrificed.

"Finally, the Shield of the New Mountain gets to do something!" - Marc was thrilled to finally take a breath weapon to the face.

"I think since there has never been a dwarven god, I'm going to pursue my dream…" - Andreas was ready to take the next step.

"I saved that god's life twice." - Jeremy was right.


We had a great string of rolls tonight!  I think there were at least four "18's" thrown, and quite a few "19's".  Probably a natural "20" as well.  Since many of these rained down during the final battle with Magrizt, it went a lot easier than I thought!  Even though Umbrin was on the verge of death, really I was expecting to lose at least one player character during the battle.  I cheated a bit and gave Magrizt (who was a re-skinned Jabberwock from The Strange) double Health, a total of 64 including 4 points of armor.  True, it was pretty easy to hit him, but with all of the "effort" and incredible hits, Magrizt couldn't stay standing for long.

At the end of the campaign I wanted to give the players the option to permanently change the Tannryth: Realm of … Something campaign setting.  Drogos becoming a god was that change.  The dwarves in this campaign didn't have a god, they worshipped their own ancestors.  So Drogos now being the "new god on the block" would certainly change the theological elements of the campaign.  We plan on using Tannryth for future campaigns, including +Marc Plourde's upcoming Cinqo con Queso adventure, which means we could have a player character that actually worships Drogos.

Since I'm becoming a "player" I may have to consider my new characters' deity.