So You Want to Start A Game Club? 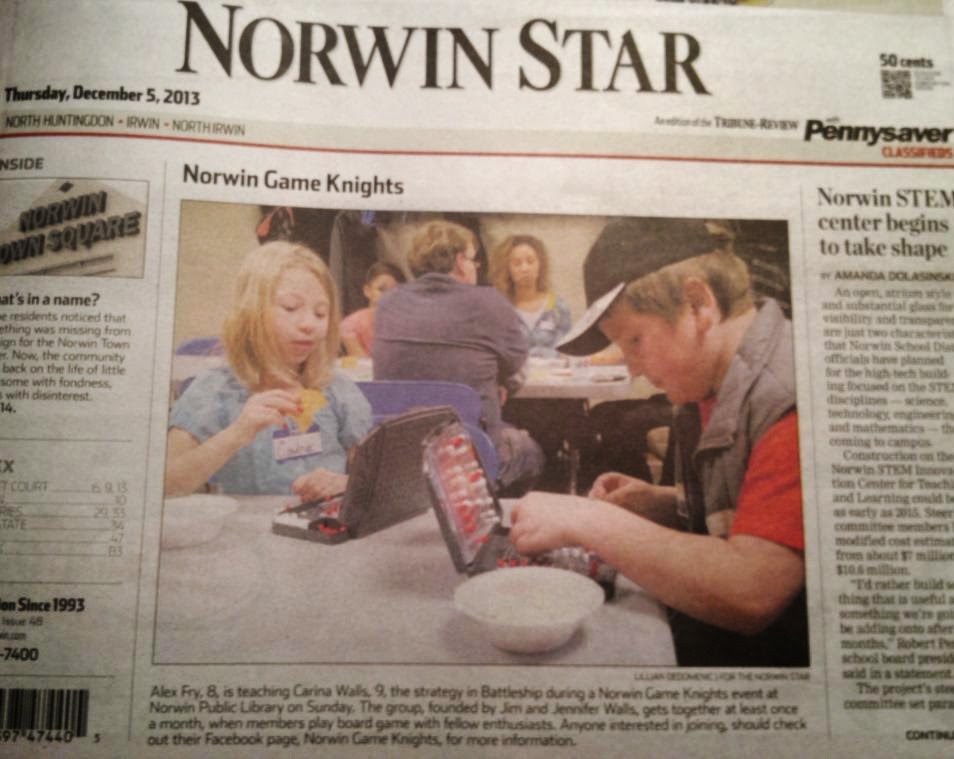 In March, 2013, Geek and Sundry, through their popular YouTube show Tabletop hosted the very first International Tabletop Day.   A full day of celebrating board games, card games, role-playing games, and pretty much anything tabletop gaming related, thousands of gamers all around the world gathered in their friendly local game stores, libraries, and homes to share their love of gaming.  For so many people around the world, it was an incredible day to be out and about with their fellow gamers!

Here in the Walls residence, it was a bit more low-key, but still a lot of fun.

My wife, mother-in-law, and two daughters ages nine and six, spent the evening playing our brand new copy of Settlers of Catan.  We thought the game looked pretty intriguing, having watched +Wil Wheaton and his pals on Tabletop trade sheep, build settlements, and compete for longest road.  At the time, we only had a few board games, and most of them were pretty traditional:  Monopoly, Life, Jenga, what you typically find in an average American household.  Sure, there was role-playing stuff in our house, but save for the occasional game, we didn't have a regular family campaign running.

Looking back it's crazy to think about how much has changed since International Tabletop Day 2013.  This was before my first Gen Con, #GetOutAndGame, Disney Numenera, and the Living 4 Crits blog.  But it was the event that started our drive to create the Norwin Game Knights.

While we sat around the table playing Settlers of Catan, my wife and I talked a little about how much fun it would be to have a larger event in 2014.  Given the turnout around the world, we believed that International Tabletop Day would become an annual event.  While playing games with our family was very satisfying, we really wanted to share the love that we had for gaming with others.


It took a while for the concept to brew, but by August of 2013, we decided to create a group with the following simple parameters:


Using the local community Facebook group All About the Norwin Area, I wrote a post gauging interest in a community based gaming group.  Much to my surprise, several dozen people replied to the first post, and I quickly threw together a Facebook Group.  The Norwin Game Knights were born!

We held our first monthly event at the Norwin Public Library in September, 2013.  My wife and I brought our two daughters, and a few Thirty-One bags full of games.  While we knew that a couple of our close gamer-friends would show, we kept our fingers crossed that some new folks would come.  Including my family, about a dozen people showed up to play Hero Quest, Risk, Settlers of Catan, Zombie Dice, and some traditional card games.

It took a lot of promoting on Facebook, and several dozen flyers to get the word out for our October event.  We kept most of our original gamers, and even had a few new faces!  We also found our "home", in the basement of the Circleville United Methodist Church!


Given the popularity of Hero Quest, I decided to break out a "real" role-playing game that November, and ran a one-shot session of Numenera.  It was my first time playing the Cypher System, and for half of our players it was their very first time trying an RPG!  We converted a lot of new RPG aficionados that night!

Each event brought new families, new friends, and most importantly new players!  On International Tabletop Day 2014, the anniversary of our "idea seed", over thirty gamers came out to the Norwin Public Library to play, laugh, eat, share stories, and create new tales.  Most of the new attendees would become club regulars!  When the event ended, a lot of our members went home and continued to play until late into the evening.

We haven't stopped since.

Creating Your Own Game Club


Maybe you already belong to a local game club, or you have a friendly local game store that hosts events.  Terrific!  What a great way to get together all throughout the year and try new games!  But if you don't have a group like this, it may be easier than you think to create a club to share your favorite hobby!

Want to give it a shot?  Just a few tips:

If you are already in a successful game club, please let us know and share your stories!  We'd love to hear from you!

Also, as a reminder, International Tabletop Day 2015 is soon approaching!  If you happen to live in the Pittsburgh Area, the Norwin Game Knights will be hosting an 11am-5pm event at Circleville United Methodist Church in North Huntingdon, PA on April 11, 2015!

We'd love to see you at our big event!