Why You Should Listen to the Doubleclicks 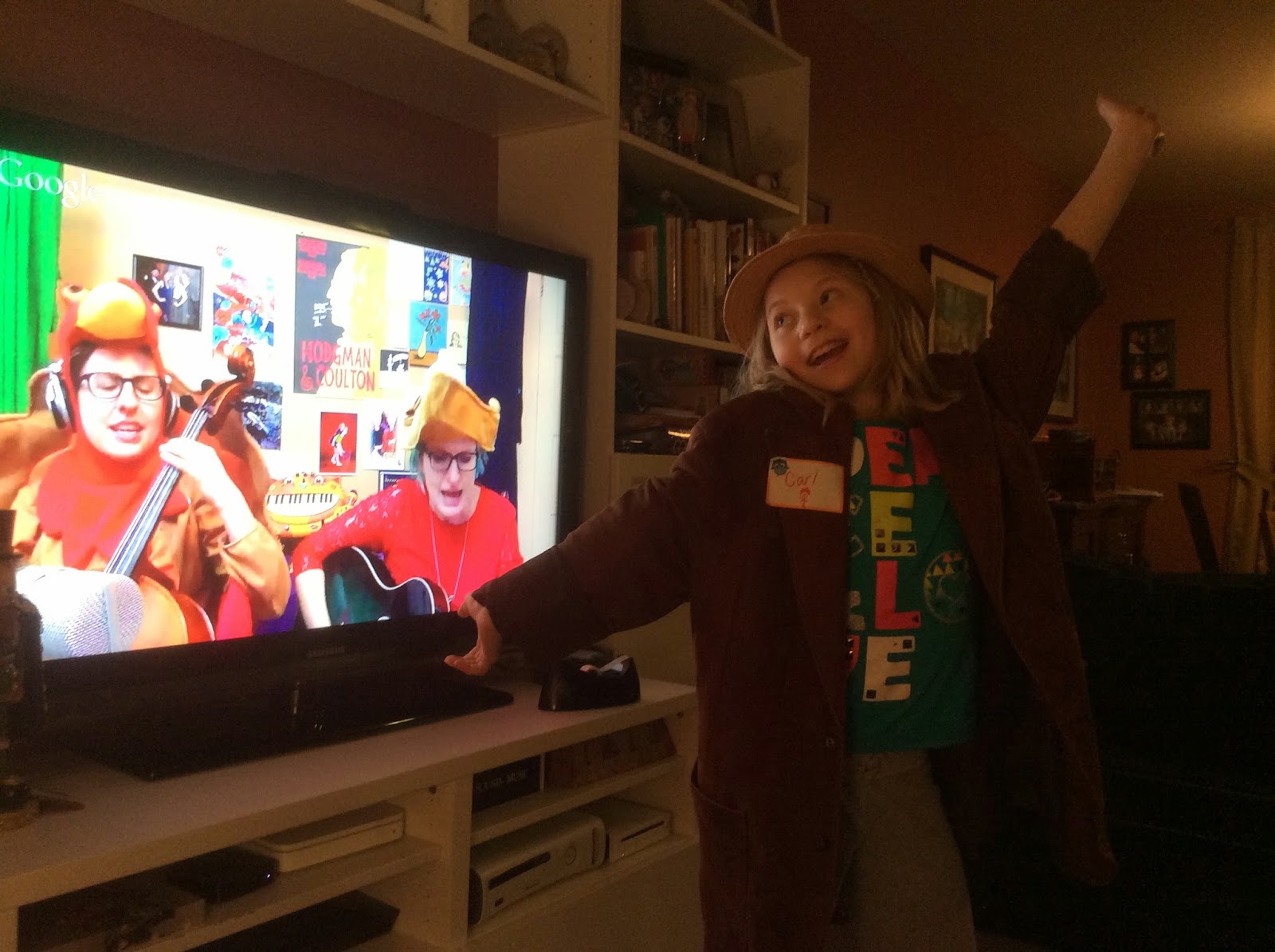 This is not a traditional review… in fact, I don't know the first thing about doing a music "review".  I think the closest to a review I've done is rating songs on iTunes, which is next to nothing.  Rather,  this is a fan family shouting out in support for two of their favorite musicians.  You may be familiar with my "Why You Should Play" posts, and I wanted to change things up this week.  It's been a tough week, and whenever I feel tired, worn out, or lost I turn to music.  So rather than talk about finding inspiration from role-playing books or products, I'd like to share my thoughts, and those of my two eldest children, on the Doubleclicks…

… and how friggin' awesome they are!


A Family of Fans


Last Friday my family and I were thrilled to watch the March #DoubleclicksLive concert on Google Hangouts.  Technically we only caught part of the show "live", as we struggled to stream the performance through my wife's old iPhone.  We were at an event for our local game club, the Norwin Game Knights, and cell service was terrible.  As soon as we got home, however, we booted up the AppleTV, and were on YouTube watching the March show…

… and then we watched the February show right after.

This wasn't our first time experiencing the awesomeness of Angela Webber and Aubrey Webber, in fact, we've been fans of the Doubleclicks for quite some time.  I first heard of the Doubleclicks while listening to the D&D Podcast several years ago, and the song "This Fantasy World."  I was mowing the lawn at the time, and was blown away by this incredibly clever song, so I ran inside and immediately started hunting on YouTube to listen again.  My family and I would listen to other songs on YouTube, and were excited to find the Doubleclicks on iTunes.  The album "Lasers and Feelings" hooked my daughters Carrie and Evie.

To date, both of my girls' favorite songs are still from this album:

"My favorite Doubleclicks song is 'Can't You See the World is Ending?'  I like it because when I listen to it, I think of our 'The Strange' campaign: Dingo and the Cosmos.  I also like it because it is catchy.  Whenever I hear it, I go upstairs and get my 'The Strange' outfit.  Then I come back downstairs and sing and dance to it.  I absolutely LOVE all of the Doubleclicks songs, but this one is my favorite." - Carrie (age 11), see cover picture.

Cooper, our four year old, declined to comment on this blog post, but while we were watching YouTube this evening he was singing along to "Ennui" from the album "Dimetrodon."

One of my favorite moments of Gen Con 2014 was the amazing opportunity to see Angela and Aubrey perform live, along with Professor Shyguy! 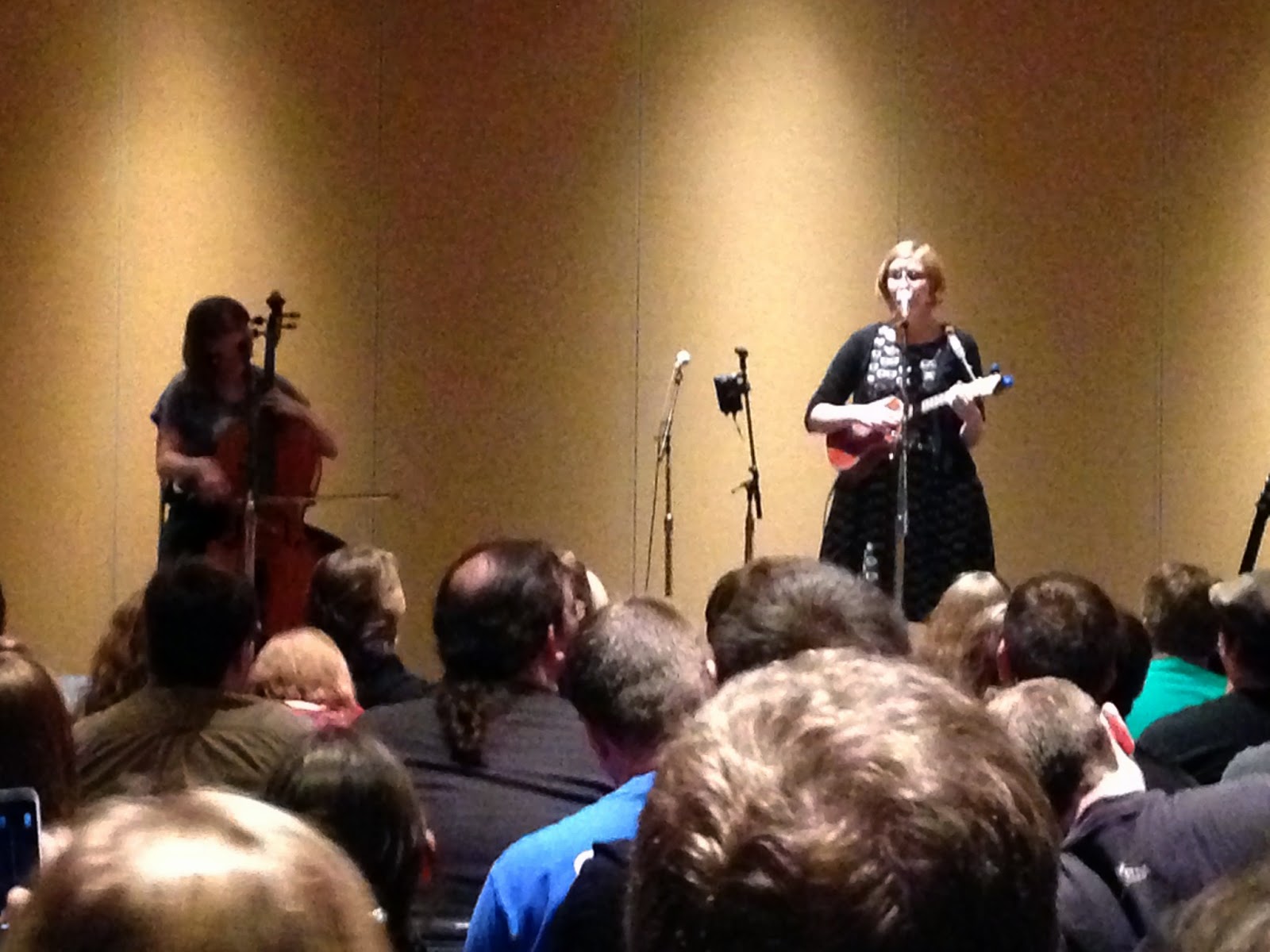 Much to the excitement of my kiddos, I came home with a new CD after Gen Con! 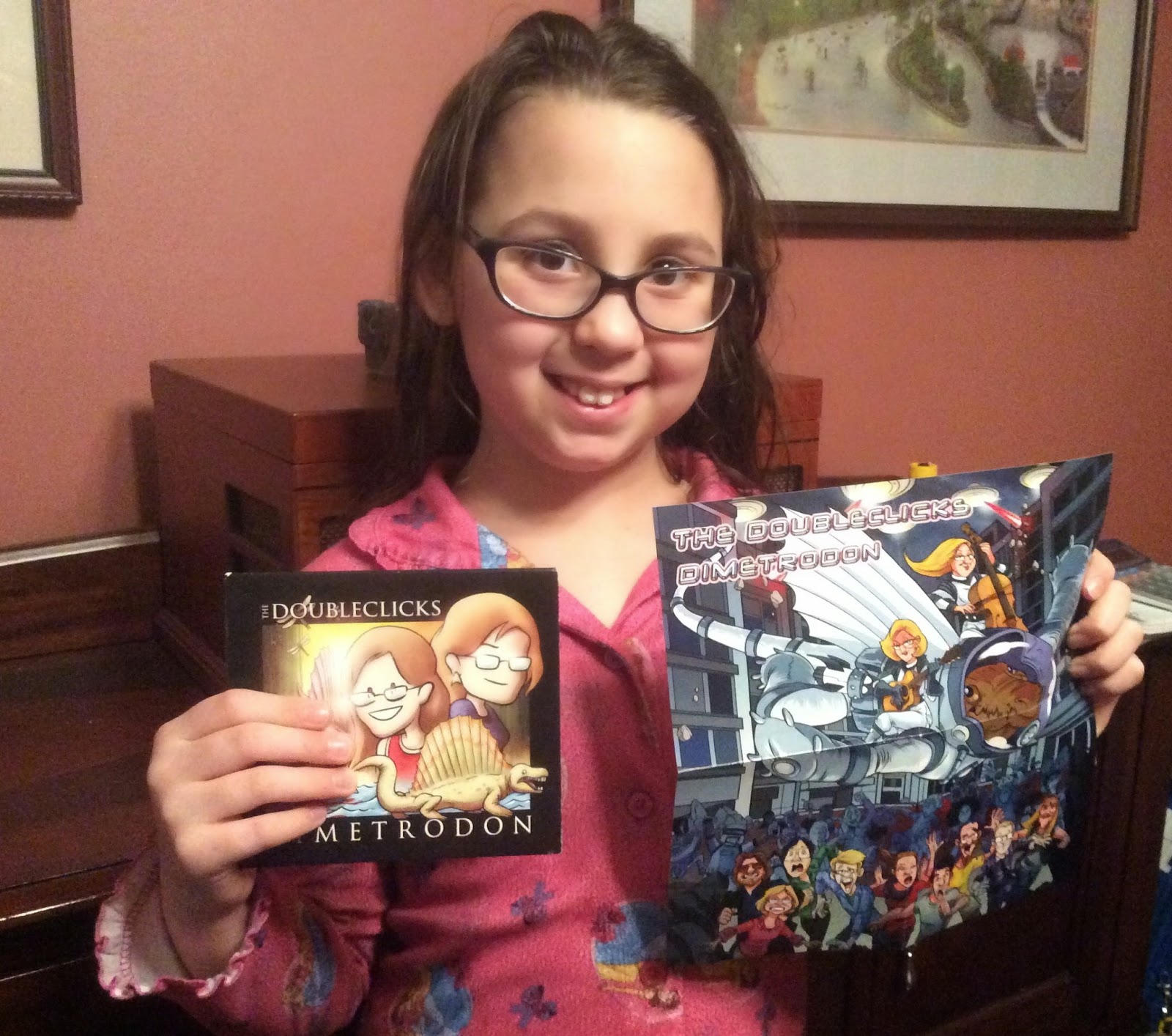 
As a geek and fan of science, history, fantasy, science fiction, video games, and tabletop games, listening to the Doubleclicks makes me feel free, happy, alive, and "at home."  I can understand and appreciate the song lyrics word for word, and the ukulele, guitar, occasional cat-keyboard, and always enchanting cello match perfectly with the style and flavor of each song…

… can I say that, does that make sense?  Have I mentioned yet that I'm not a professional musical reviewer?

It's also music that I can share with my family… although I got in a little trouble with my kids while singing along with one of the last verses of "Oh, Mr. Darcy."  If you know the words, you know what I'm talking about.

Since I asked my daughters for their favorite songs, I thought I'd also share mine.  I don't have cats (I'm a goldendoodle kind of guy), but as a proud "cord cutter" I do treasure my Netflix.  I know that "Cats and Netflix", off of the Dimetrodon album, was written about Angela and Aubrey's hometown of Portland, Oregon, but if you include sleet, ice and sub-zero temperatures the song fits well here in Pittsburgh.

When I was in my mid-twenties, I used to drive around listening to Jimmy Eat World.  I was working for a social services firm here in the Pittsburgh area, and would transport foster children on visitations to their biological parents' homes.  A lot of the children would only get to see their parents once a week, and I would be the driver and supervisor who would facilitate the journey, and ensure a safe atmosphere.  A lot of the visits ended with tears and sorrow.  The Doubleclicks' recent cover of Jimmy Eat World's "The Middle" took me back over a decade to my time with those families.

But by far, my favorite song by the Doubleclicks is "Imposter", from the album Lasers and Feelings.  Even though I am fully aware that the song is about the Mars Curiosity Rover, I can completely relate… to the rover.  During the evening and on weekends I am the crazy gamer geek that you all read about here on my blog, but by day I wear suits and ties, manage employees, review profit and loss statements, and have to "play" the stern business professional.  I think I'm pretty good at it… maybe… although the "real" world can still feel a bit alien.

Where You Can Find the Doubleclicks

If all of this sounds good to you, you need come check out the Doubleclicks.  Since it's the modern age, you have a lot of options!

You can go to thedoubleclicks.com to check out concert dates, both live and online, and purchase CD's through CDBaby, t-shirts, and dice…

… YES YOU CAN BY DOUBLECLICKS DICE!

You can also find the Doubleclicks on iTunes, Bandcamp, and Amazon.

Also, you can do what I just did today (took me long enough!) and support the Doubleclicks on Patreon!

At the very least, get your butt over to YouTube right now and start listening… you'll be very glad you did!

Are you already a fan or supporter of the Doubleclicks?  Let us know!  Please share the post and point your fellow geeks and gamers to this amazing duo!

Email ThisBlogThis!Share to TwitterShare to FacebookShare to Pinterest
Labels: Folk Music, The Doubleclicks