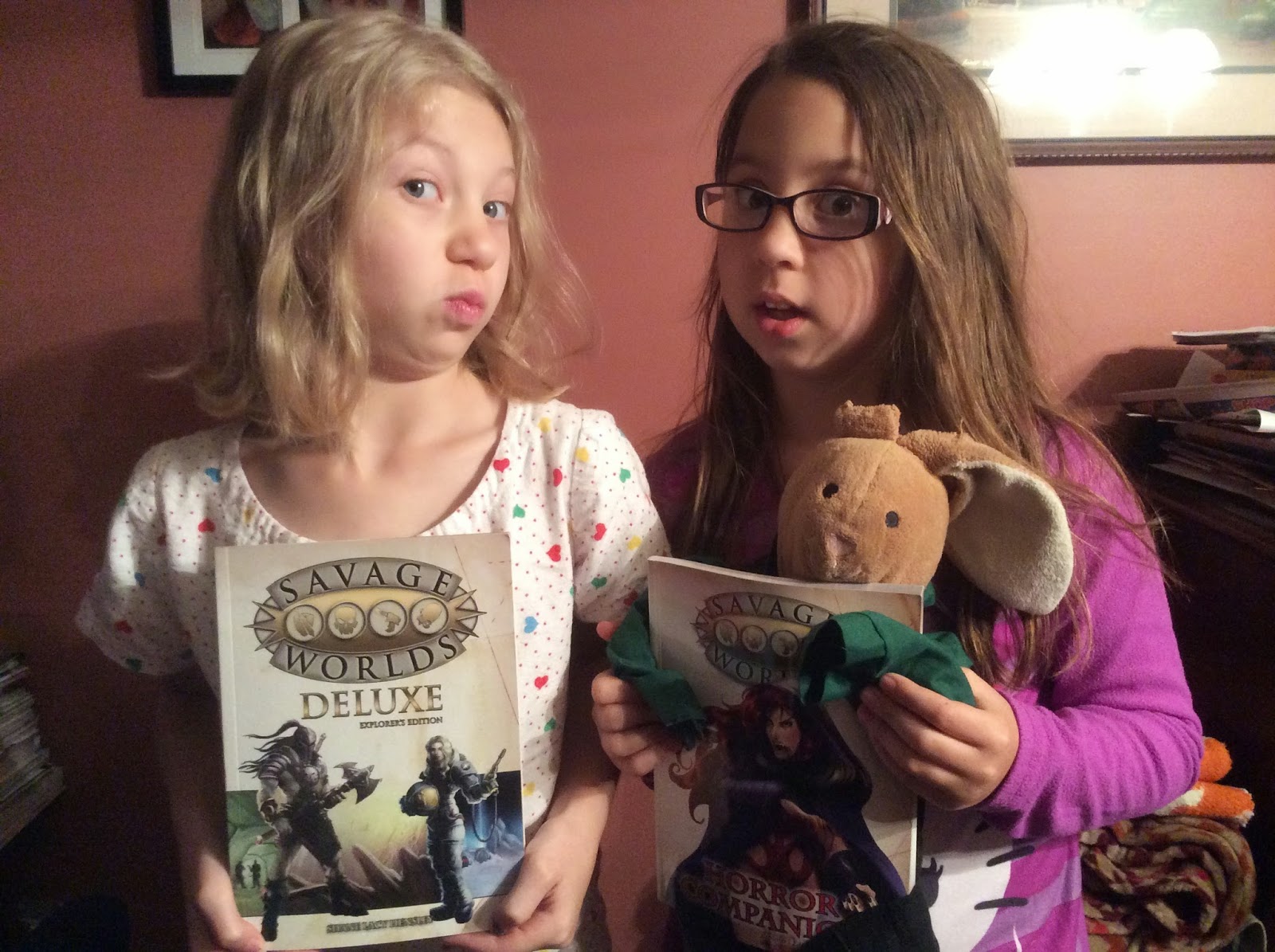 To My Horror, I Return Home


I've always had a soft-spot in my "gamer's-heart" for Gothic Horror.  When I was a new roleplaying gamer in the early 90's my first official Dungeons & Dragons campaign setting that I purchased was Ravenloft, and the mists have always felt like home.  Whenever our gaming group played in one of my many home-brewed high fantasy settings we would have a terrific time, but when I brought out those red boxes with creepy lettering something dark, sinister, and magical occurred.  Just telling the players that we were "entering Ravenloft" would invoke an entirely different mood.  Candles were lit.  Incense was burned.  Red silk scarves from our mothers' closets were draped around lamps.  Our best role-playing happened during those encounters with monsters that couldn't easily be defeated through shear might and fireballs. 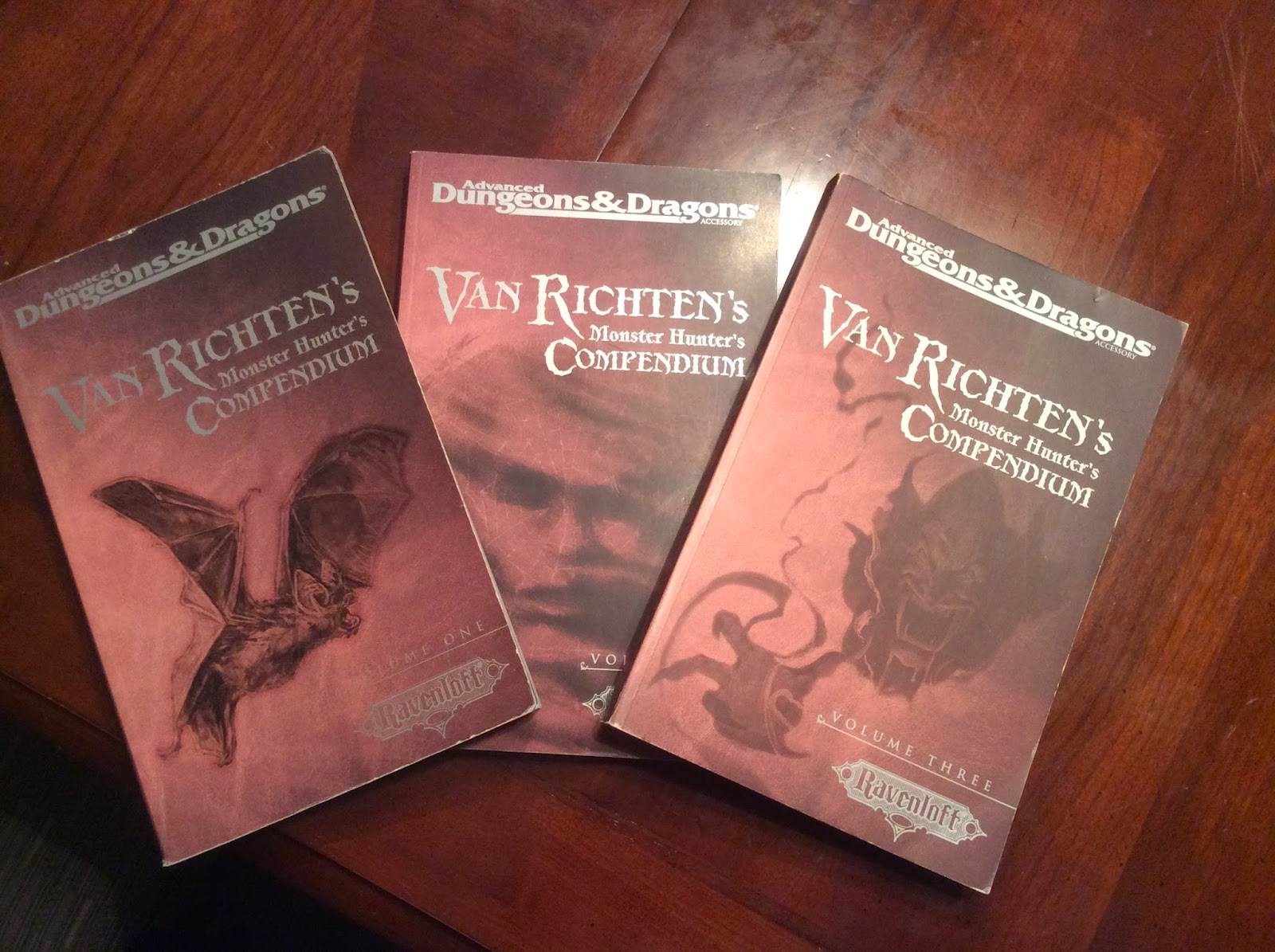 Since I am raising two "gamers-in-training", I feel it necessary to take my daughters (and drag my wife) on a sight-seeing tour of Gothic Horror before they got the impression that all vampires sparkled and werewolves refused to wear shirts.  We just came to a logical end point for our Disney-themed Numenera: Disenchanted Tales campaign, and while we may very well return to the Three Princesses of Nihliesh and their quest through the Ninth World, everyone seemed ready to try something different for a little while.  Actually I was looking to get back into traditional fantasy, but knowing my daughters and their unusual tastes, we wouldn't last long with a "vanilla" campaign setting.  So I started considering a return to Ravenloft, with a Tim Burton/Adams Family twist.

I've been a big fan of Pinnacle Entertainment Group's Savage Worlds system for a couple years know, and both my girls and wife have played a few "fast, furious, and fun" adventures.  It was a natural choice of systems for what I wanted to do, and I resigned myself to the Ravenloft conversions when a certain gentleman on Google+ (Mr. Joseph Hepler) made the suggestion to try Accursed.  If you aren't familiar with this Savage Worlds setting, imagine the classic Gothic Horror tropes of Ravenloft married with the action-adventure spirit of The Mummy or Van Helsing.  But where in Ravenloft you are a typical adventuring party braving the horrors of the supernatural, in Accursed you ARE the supernatural!  The characters are "Witchmarked," taking on the curse and powers of a mummy, werewolf, golem, or other monstrous type, and using them to reverse the blight on the land.

After playing our first game of Gloom with my cousin Rachel and her fiancé Carmel two weeks ago, I've had the idea stuck in my head of starting off a campaign where the players build an entire family and then generate characters from the family-members.  Role-playing a clan similar to the Adams Family or the Munsters could be a lot of fun.  For my daughters, the idea of the supernatural, especially the undead, is not that scary at all despite being a common theme of horror.  We are a house full of Tim Burton fans, and I figured that if I could run a campaign in the theme of The Corpse Bride, Beetlejuice, or the Nightmare Before Christmas I'd have a "home-run!"  It's also the Steam Summer Sale right now, and coincidentally the games that I purchased had a bit of a horror theme to them.  Carrie is currently engrossed in Don't Starve and I finally bit the bullet and shelled out $6 for both The Witcher and The Witcher 2.  As an aside, if you haven't played The Witcher, you are missing out… just an incredible game that I cannot believe I overlooked for so many years! 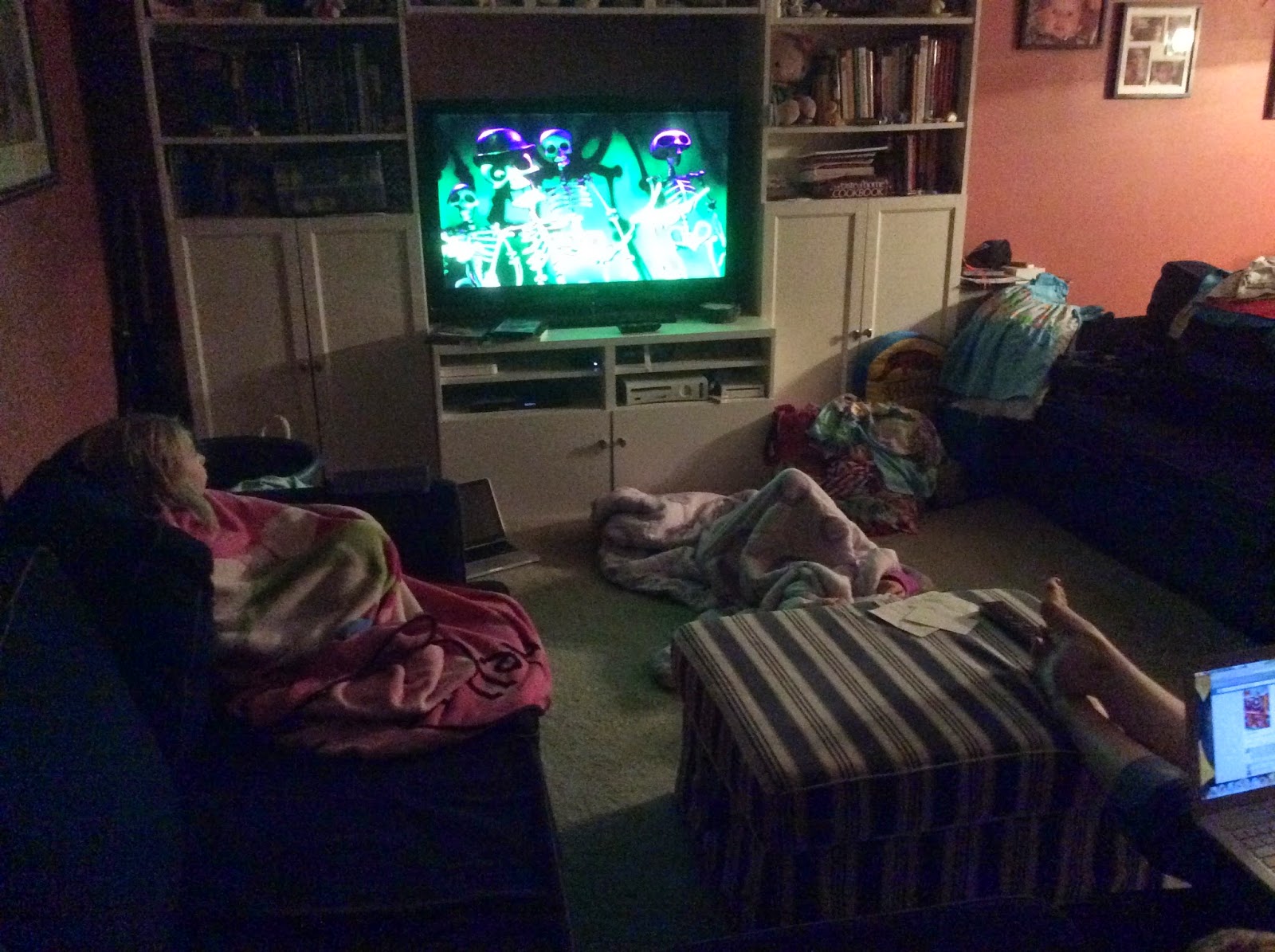 Watching Tim Burton's "The Corpse Bride" for a little inspiration 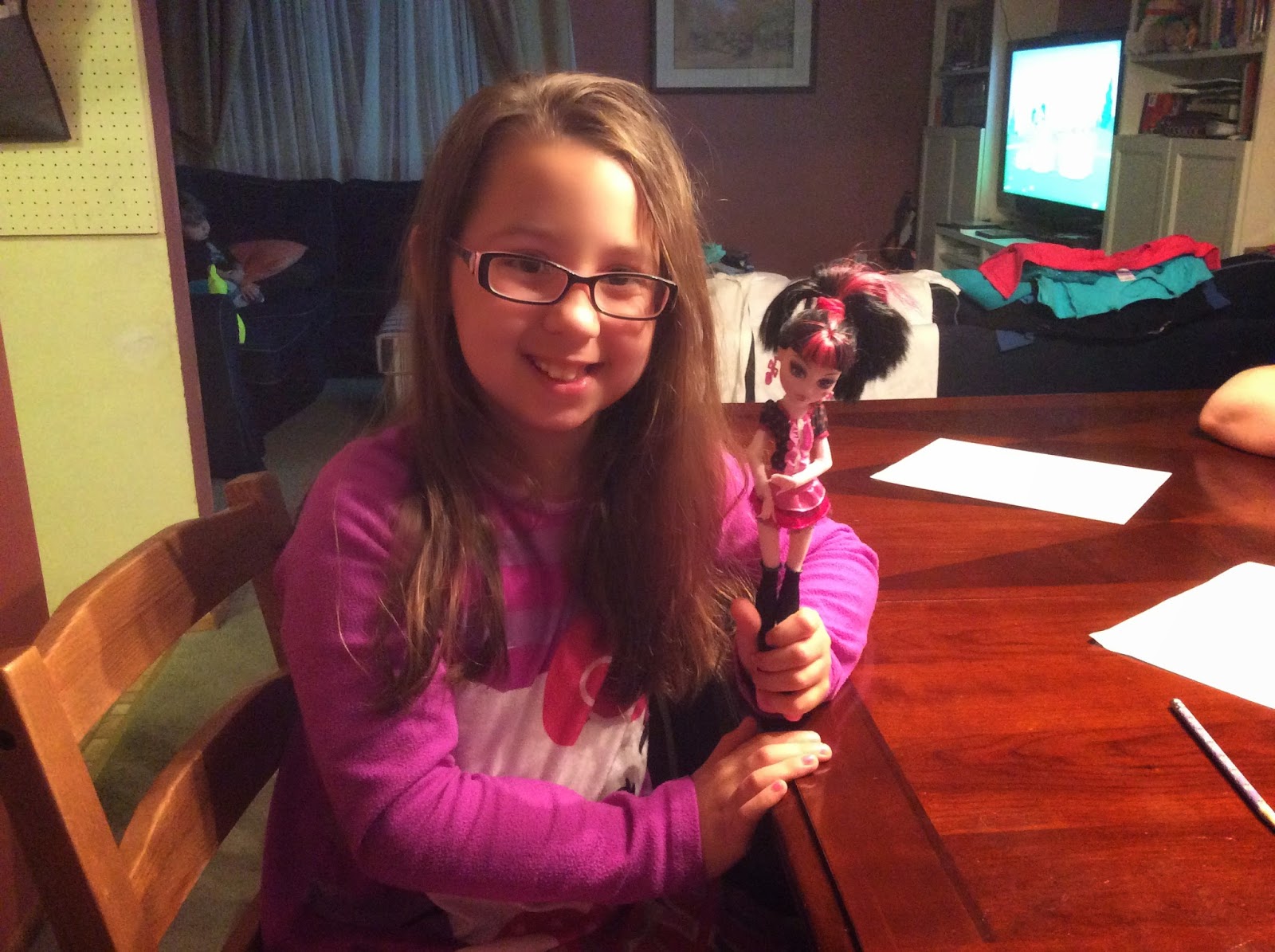 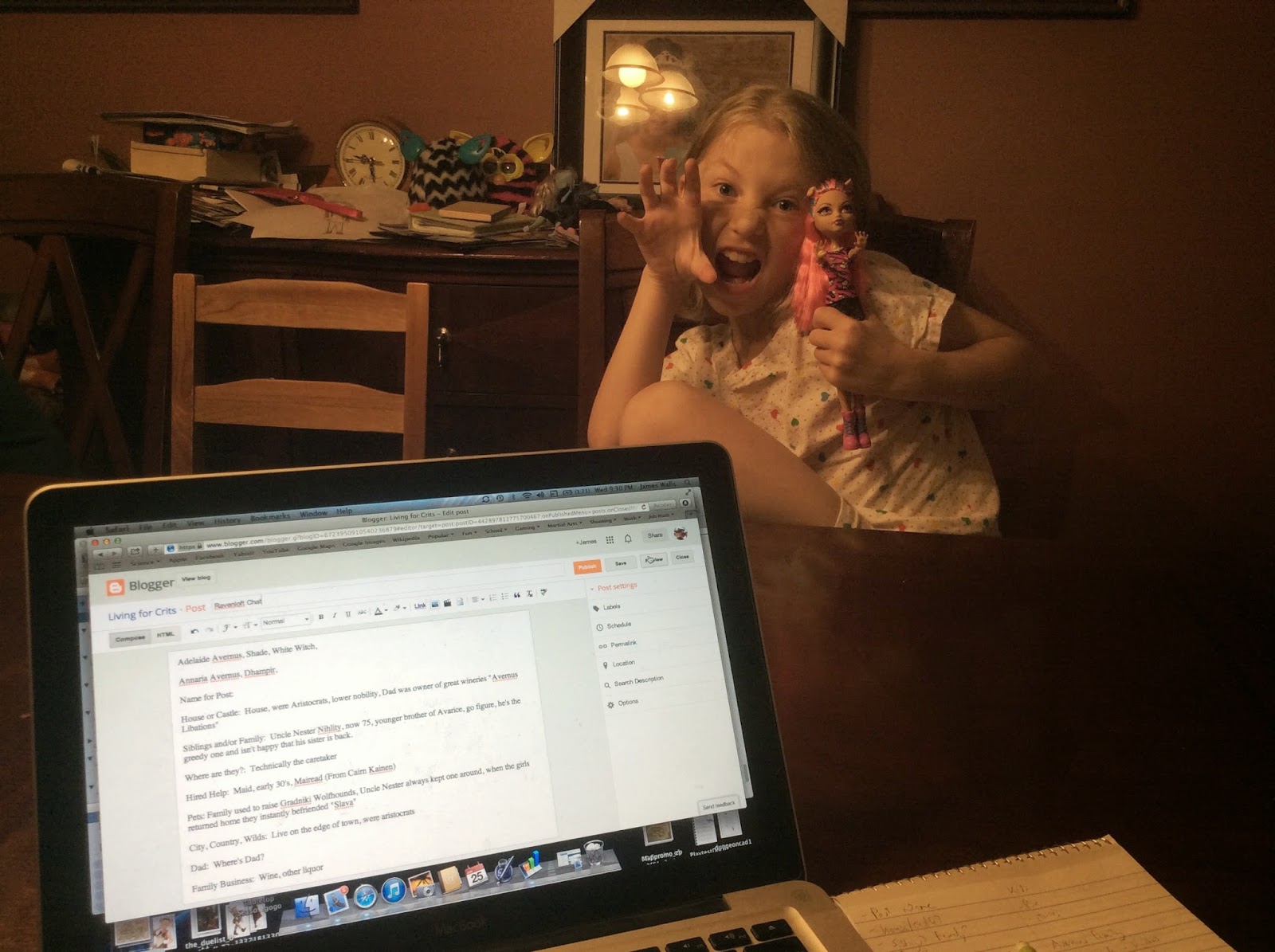 
With all of this in mind, I sat down with my wife and two daughters at the dinner table earlier this evening and we generated our "family".

The clan Avernus was a well-to-do and respected family for over a century in the town of Augsing, Valkenholm, as they owned and operated several nearby vinyards.  In the decades before the Bane War, Avernus Libations truly came into it's own under the watchful eye of Alistair Avernus, shrewd businessman and heir to the Avernus estate.  Alistair was a jovial and caring man, and was happily married to the very fashionable Avarice Nihlity with whom they had two darling children: Annaria and Adelaide.  Avarice was obsessed with appearances, both her own and those of others, and due to her husband's long business trips to and from Caer Kainen, she talked her husband into allowing her to open a millinery shop, where she could craft only the finest hats for the other local ladies of Augsing.  Annaria, who was 18 at the start of the Bane War, was an accomplished dancer and acrobat.  Adelaide, 11, was a bookworm who loved stories of the fey and the Summerlands.  Aside from their wine and hat making, the Avernus family also raised Gradniki Wolfhounds, a breed discovered when Avarice and her husband toured Steppengrad before they had their children.

When the Bane War began, Alistair was returning home from Caer Kainen, where he was meeting with business contacts.  When the stories of the invading Witch-led hordes reached Augsing Avarice was especially horrified as both of her daughters had accompanied their father on this most recent trip.  When the weeks turned to months, Avarice couldn't wait any longer.  She set out to find her husband and daughters and bring them home.  Little did she know that her family was beset upon by agents of the Witch Armies.  Annaria was taken off to the Dark Queen's forces and transformed into a Shade and Adelaide was grabbed by Banes from the Blood Witch and turned into a dhampir.

It would be decades before Avarice would know of her children's' fate, when they would all meet in the dilapidated Avernus home on the outskirts of Augsing.  Coincidentally Annaria and Adelaide both returned home on the same day. Both daughters showed their mother their Witchmarks but were horrified when Avarice finally showed her face and her own Witchmark.  During her quest to find her husband and children the family's matriarch was beset upon by forces of the Djinn.  A skilled fencer, accompanied by nearly an entire pack of the family Gradniki Wolfhounds, Avarice managed to kill the Accursed that had cornered her in one of Morden's southern cities.  Unfortunately, it was a Mummy, and the curse was transferred to Avarice, who spent her own time in service to the Witch Armies clad in her own Sarcophagus-armor.  The whereabouts of Alistair Avernus are still unknown, as neither daughter saw him killed or captured.

Uncle Nester Nihlity, now 75, was not particularly thrilled to see his younger sister return to "his" after he thought he had inherited the beautiful structure so many years before.  Avarice and her daughters planned on using their family estate as a base of operations for their upcoming quests. Alistair Avernus was still out there, somewhere, and the Witches knew about him.  The Accursed Avernus family would have no problem at all using their battle-tested powers and abilities to find answers, and slay a few Banes along the way.