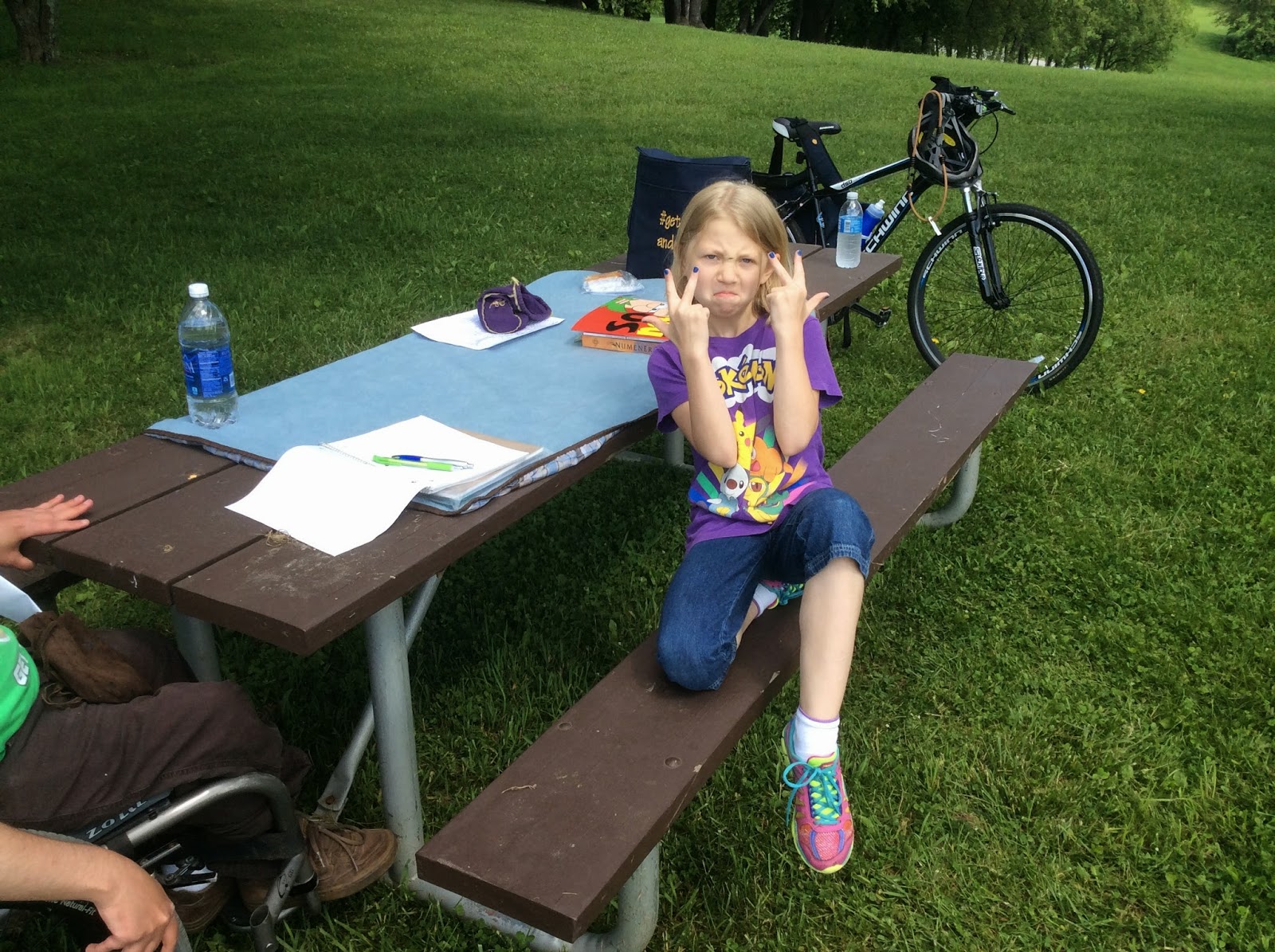 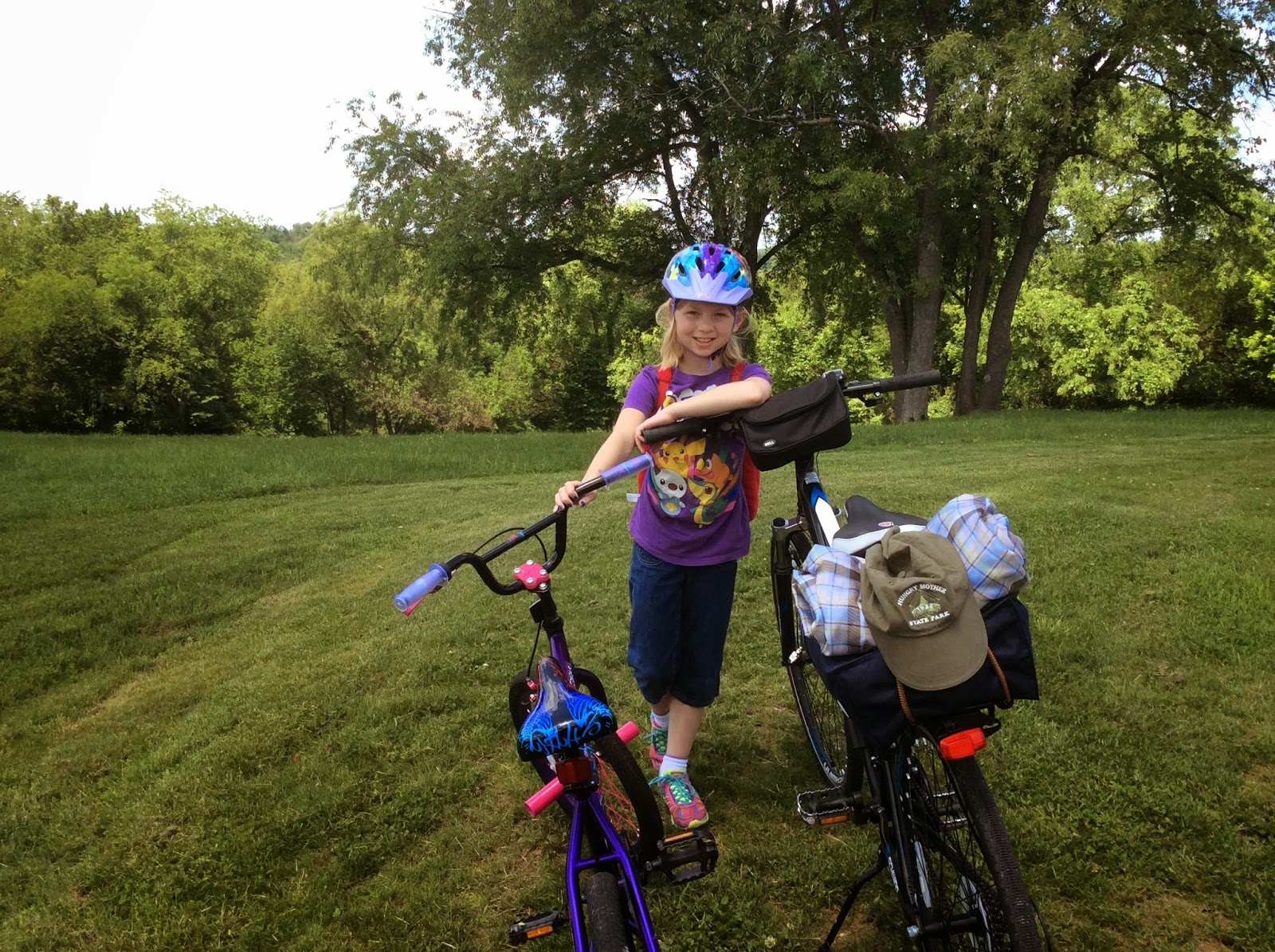 Bob, loud talking moms, and flies!  We had a crazy, but fun day out at Oak Hollow Park in North Huntingdon, PA, although it will most likely be our last trip to that small location.  When Carrie and I arrived much of the park was empty, save for all the folks showing up for "Bob's Retirement Party."  As much as we want to game in public, and show off our hobby, we didn't feel it appropriate to sit down with Bob and his friends, family, and coworkers to roll some dice. 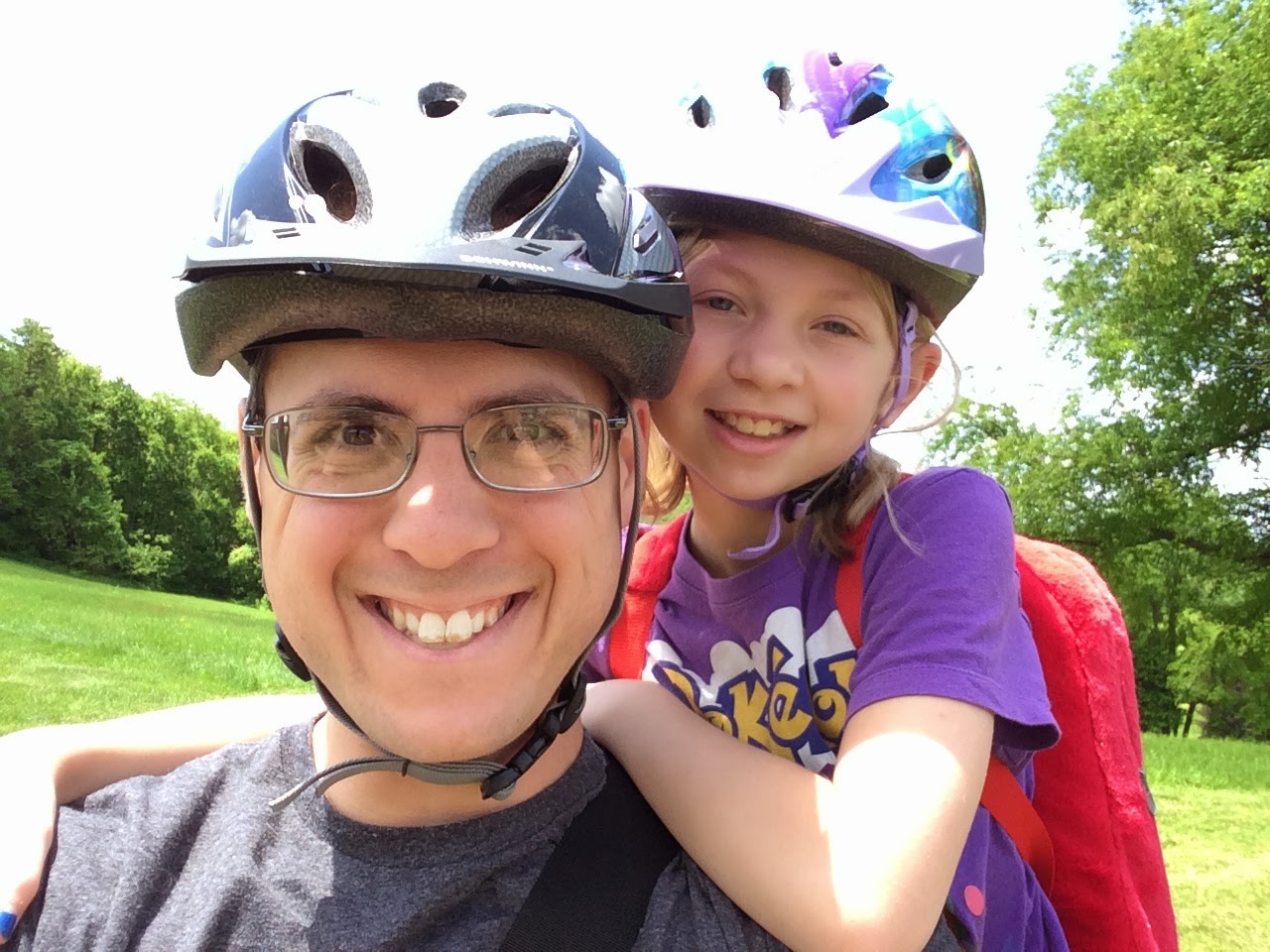 There were other pavilions though, small and quaint and perfect for a role-playing excursion!  Carrie and I started to ride around the park, enjoying the beautiful day (it was 75 and sunny when we arrived), but quickly discovered that Oak Hollow was small… very small.  A single loop of the park was less than a mile, and because of the park's situation on the side of a hill you'd have to go down a steep road and then back up on each lap.  Poor Carrie's bike doesn't have any gears, so she was forced to walk hers up the end of each hill each time we came about.  After thirty minutes of riding we picked one of the pavilions and sat down for lunch. 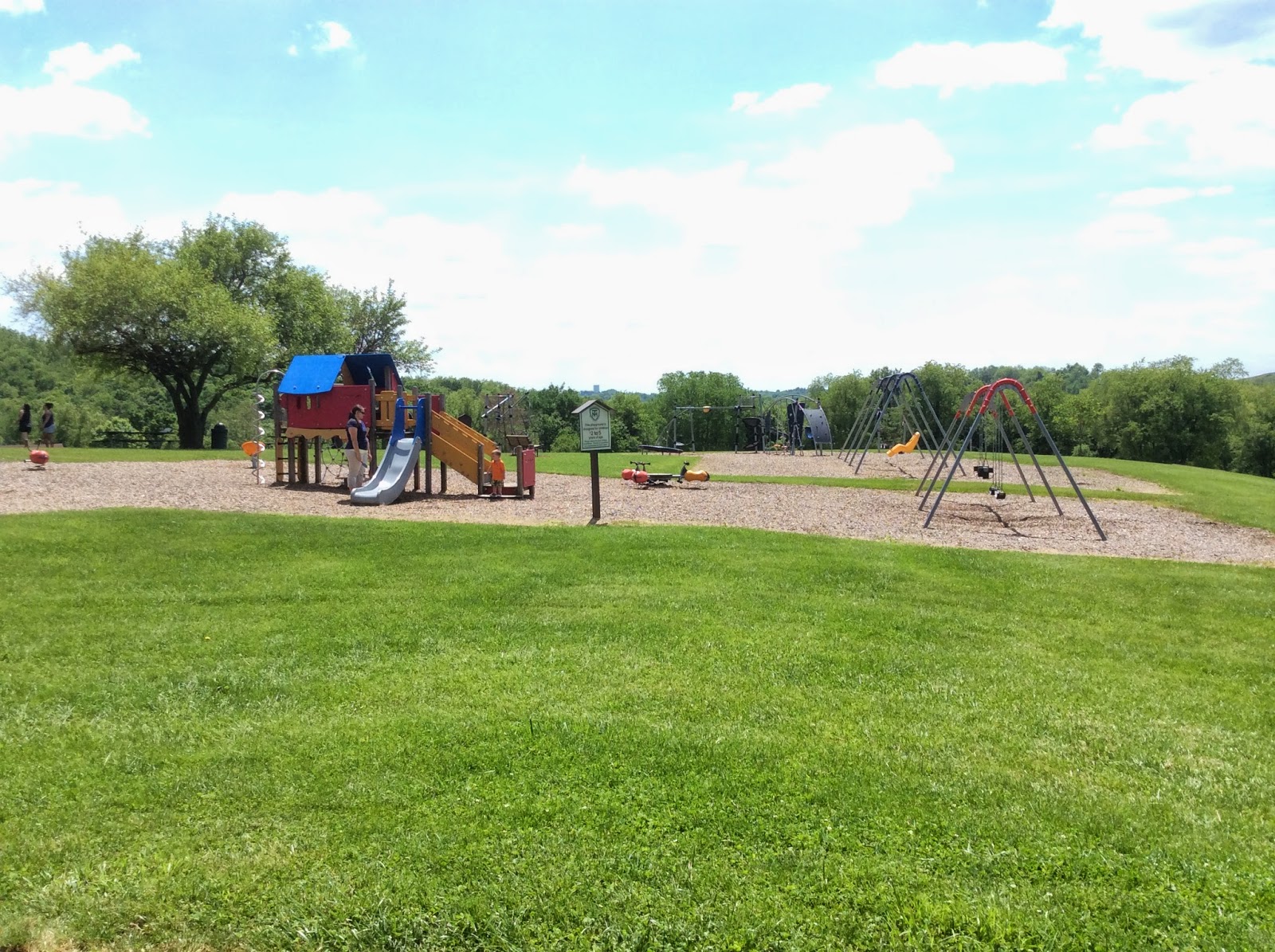 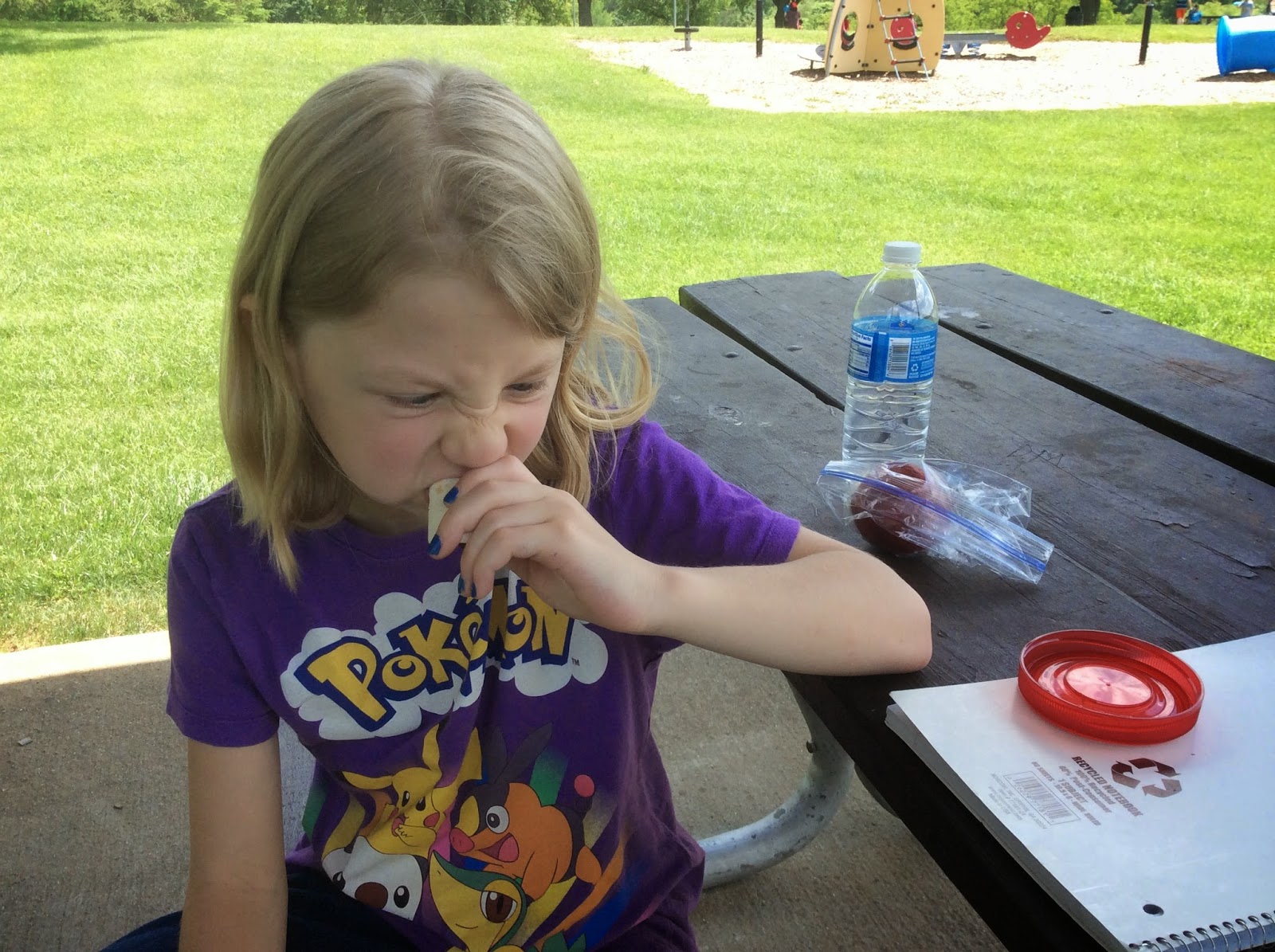 Our location was right next to the playground, and while I started to unpack my bike Carrie insisted that she go out and play with all of the kids that started to arrive for Bob's big party (again, a disclaimer that I don't know who Bob is… sorry).  She came back to the table for her notebook and then went back onto one of the jungle gyms to sketch and write because she said it was very peaceful, insinuating that she preferred her alone time to that spent with her younger sister and brother who are usually accompanying us at a park.

Eventually we both got hungry and unpacked the meatloaf wraps from our cooler and started chowing down.  It was still relatively cool out, neither of us were very hot, but we still appreciated the chilled meat-burritos!  It was around the time that our first (of 3) pavilion changes occurred.  We were only taking up one of the two picnic tables located under the pavilion's roof, but I had our bikes parked pretty close to the other table to lay claim.  A woman in a Jeep Liberty pulled up nearby, very loudly talking on her cell phone as she quickly got out of her car, walked right up to one of our tables, and sat down.  She wouldn't stop talking, and it didn't seem like I could get her attention.  Each time I tried to make eye contact she looked away and took a sip of her iced Dunkin Donut's coffee.  Luckily there was another pavilion nearby that seemed empty, so I told Carrie to pack up and we'd relocate. 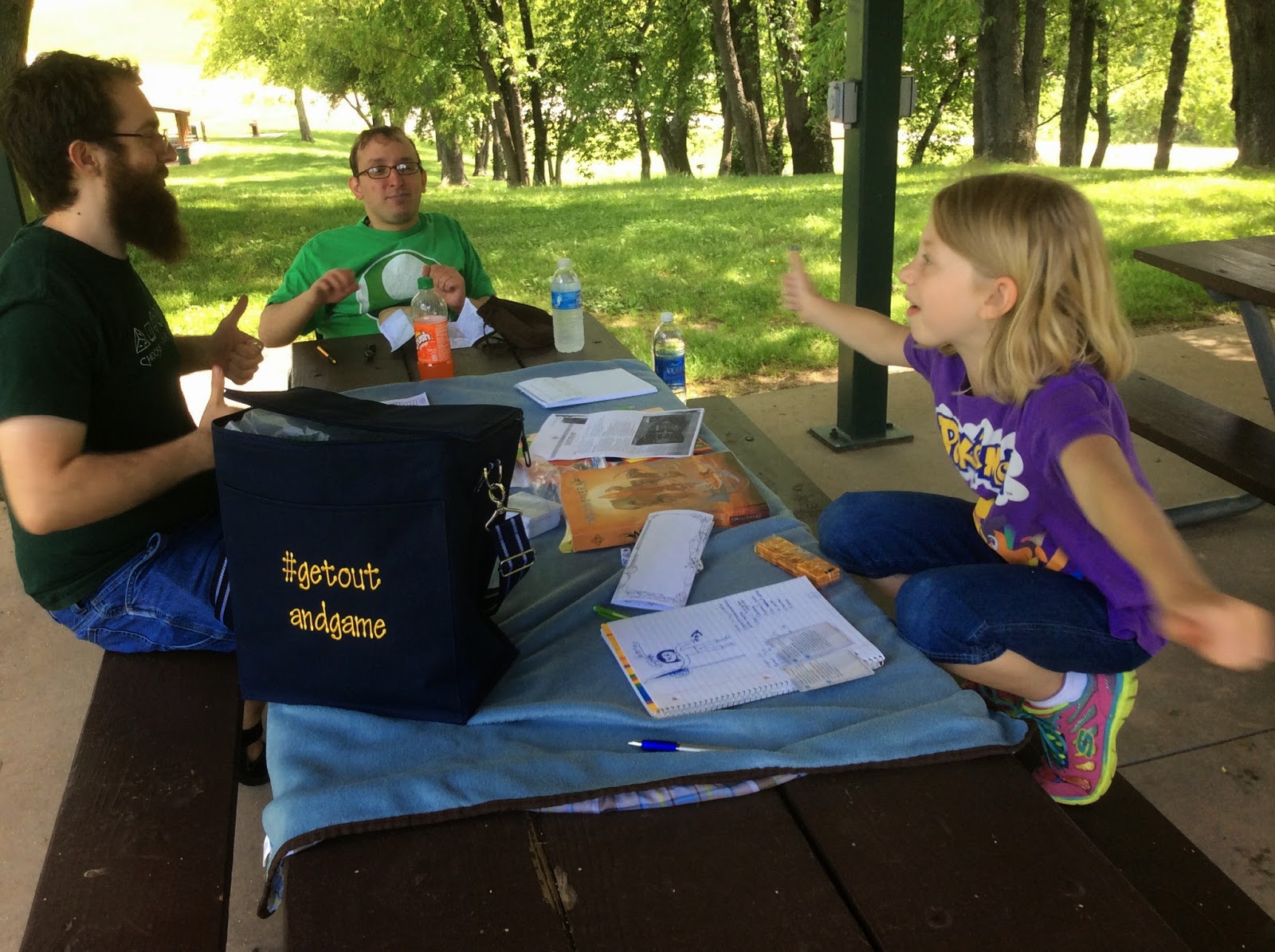 By the time we finished relocating, our friends Andy and Eric joined us.  We stretched out our table, cracked open our books, and learned that the universe is quite capable of tossing out GM Intrusions.  The first was the coming of the flies!  Unlike the White Oak Park, where the pavilion users are required to take their own trash bags to the picnic sites, at Oak Hollow they are provided… and infested with flies.  We spent the first half of the adventure just trying to swat the things away and keep our sanity. 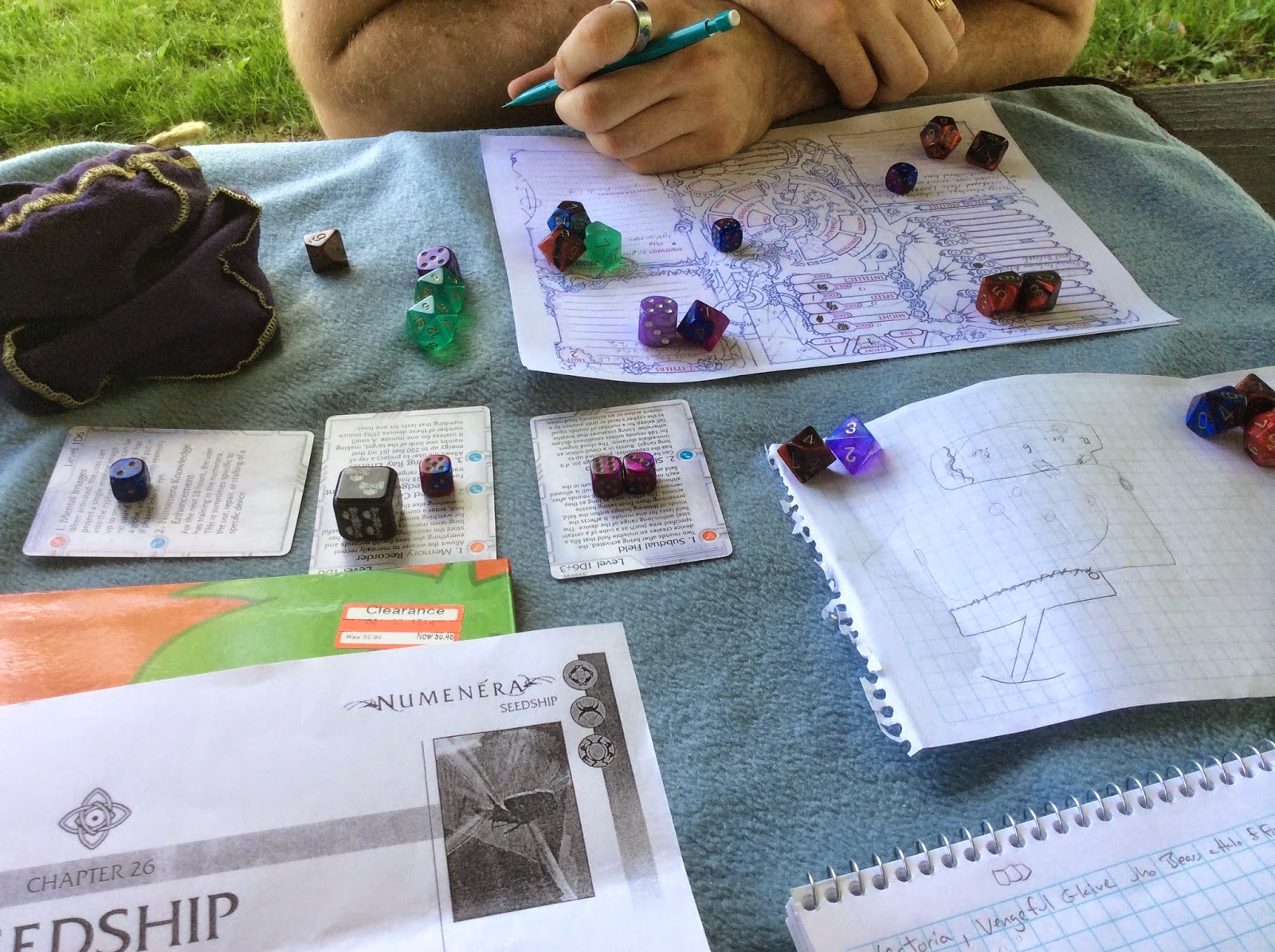 The second challenge was the wind.  It was quite breezy, and my new and shiny deck of Cypher Cards had a bad tendency to blow away, especially if individual cards were left lying about.  Eric had a brilliant solution to his problem, however.  He just started unloading his dice bag and using his polyhedrals as mini-paper weights for each character sheet and cypher card.  Eureka!  Carrie and Andy started doing the same, and Eric was even nice enough to let this old GM put a few down on the map that was being drawn to depict the character's quest through the Seedship. 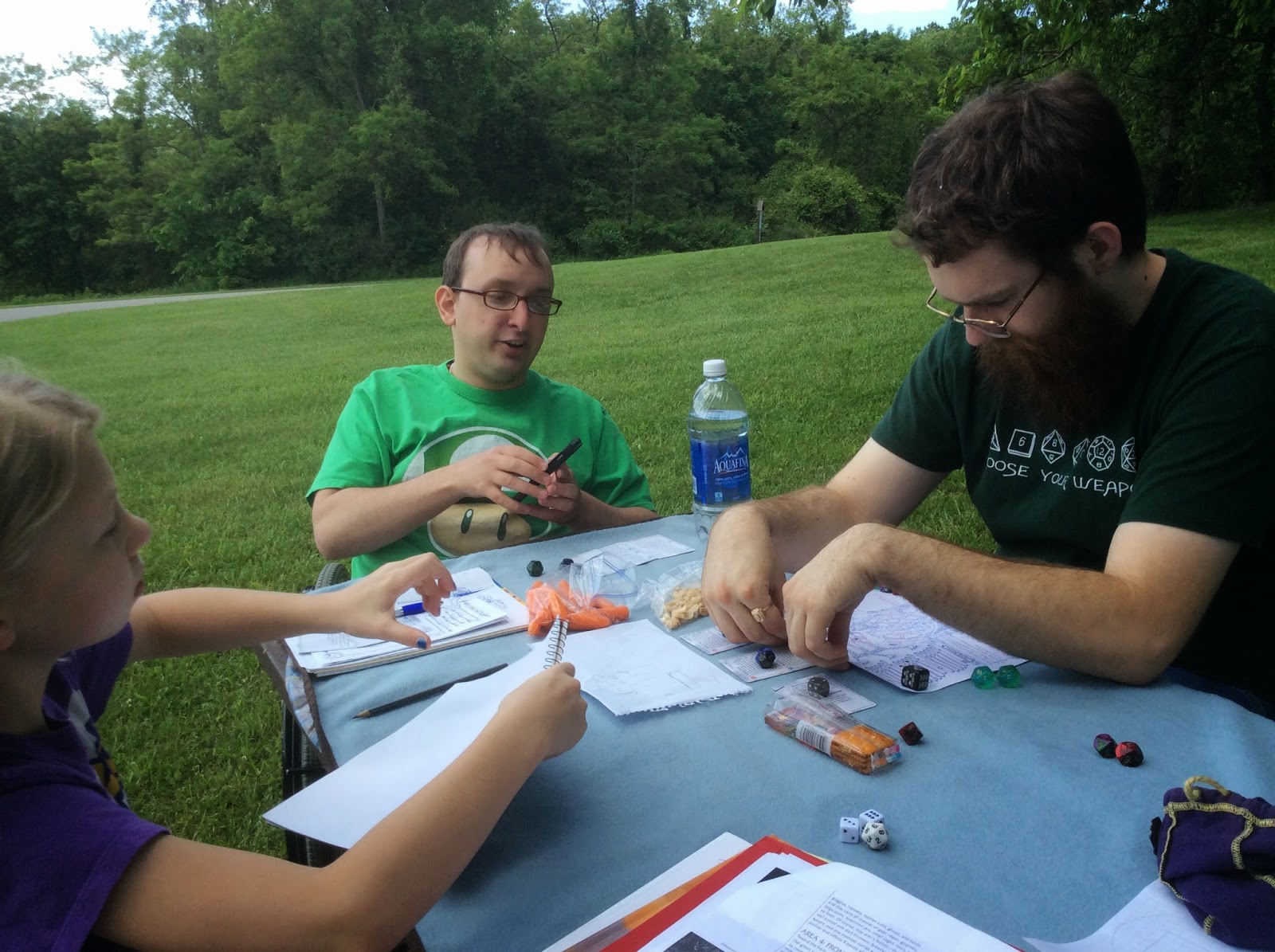 The flies did eventually drive us completely bonkers, so we planned one more move.  Packing up a final time, with an hour in the game left to spare, we walked to a picnic table out in the sun that was placed half-way between our first pavilion and second.  Soon after the loud talking, Dunkin Donuts drinking woman grabbed her kids and got back in her car, but by this point we were fully immersed in our adventure and unable to move again.  But it was fine, since the sky was gorgeous and we had a fantastic adventure going on.  Despite some of the crazy antics from this trip, everyone seemed to have a blast! 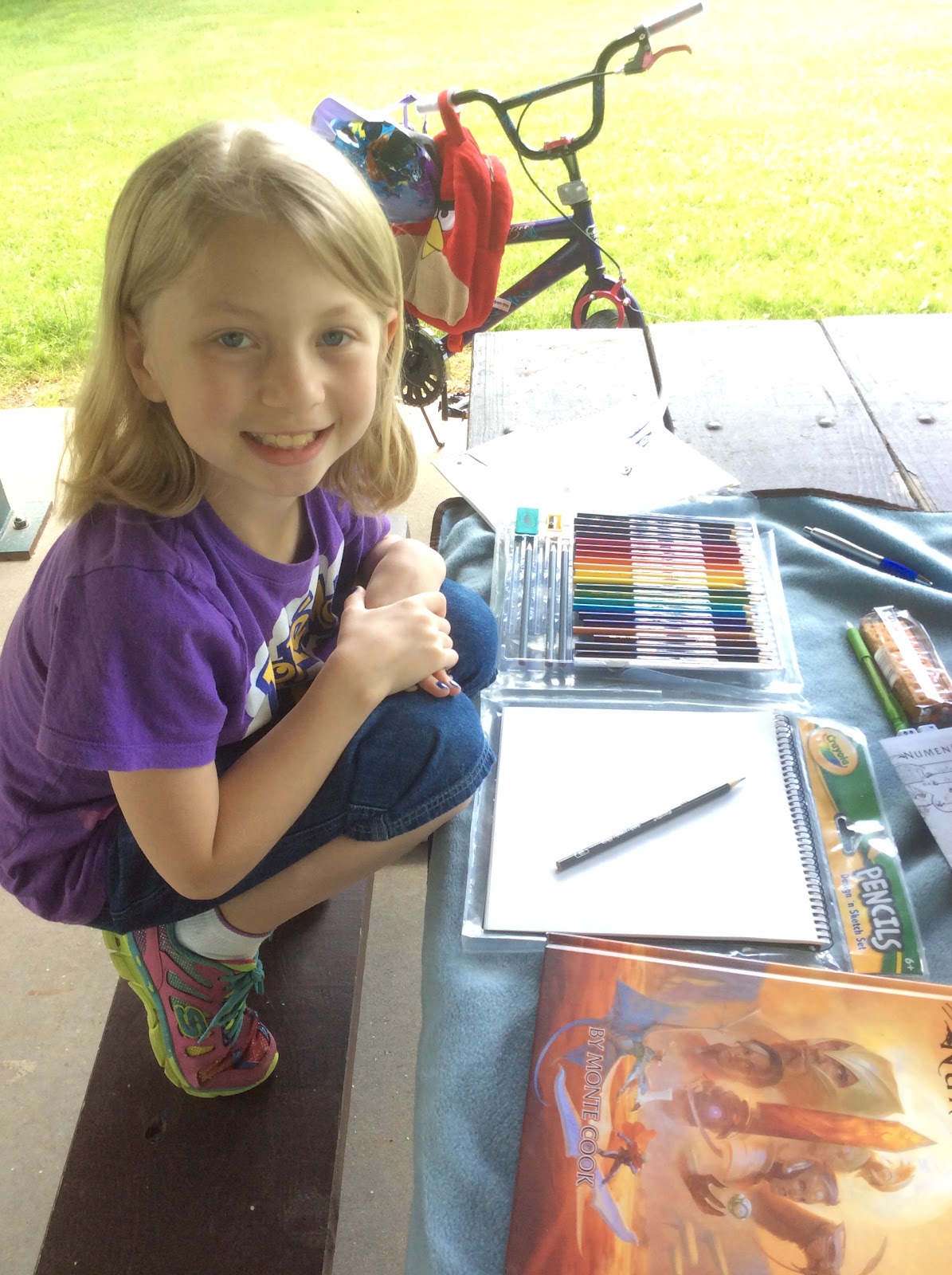 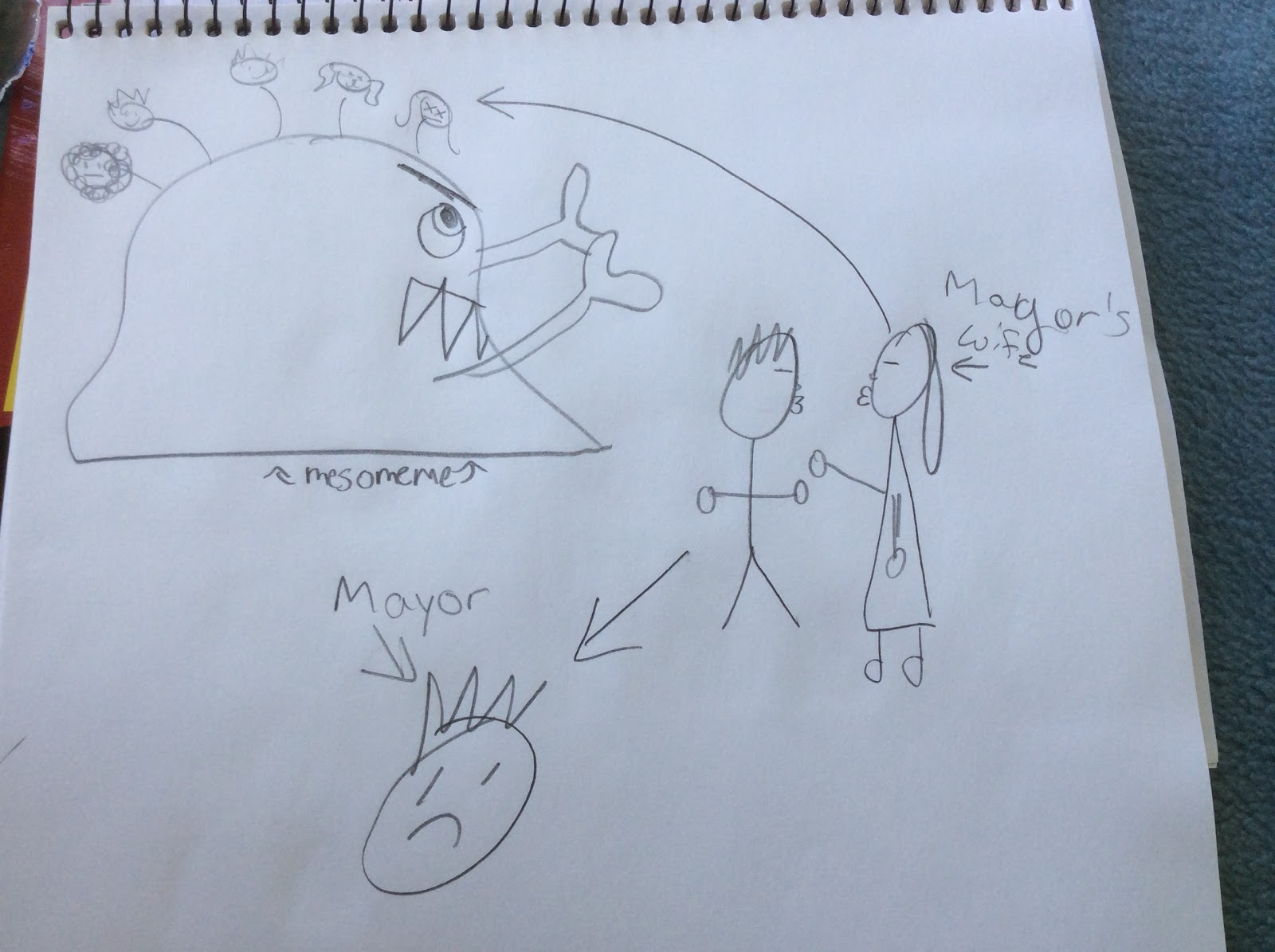 In our last adventure our intrepid band of Numenera hunters started exploring the strange and alien structure that lay beneath the town of Druissi, situated in the Beyond of the Ninth World.  They succeeded in finding the whereabouts of the Mayor's wife, but sadly her life had been taken by the mesomeme that was hidden within the structure.  Despite the Mayor's despair, he still pleaded with Rygax to continue exploring so that they could finish his wife's quest to fix the anomalous behavior of the structure. 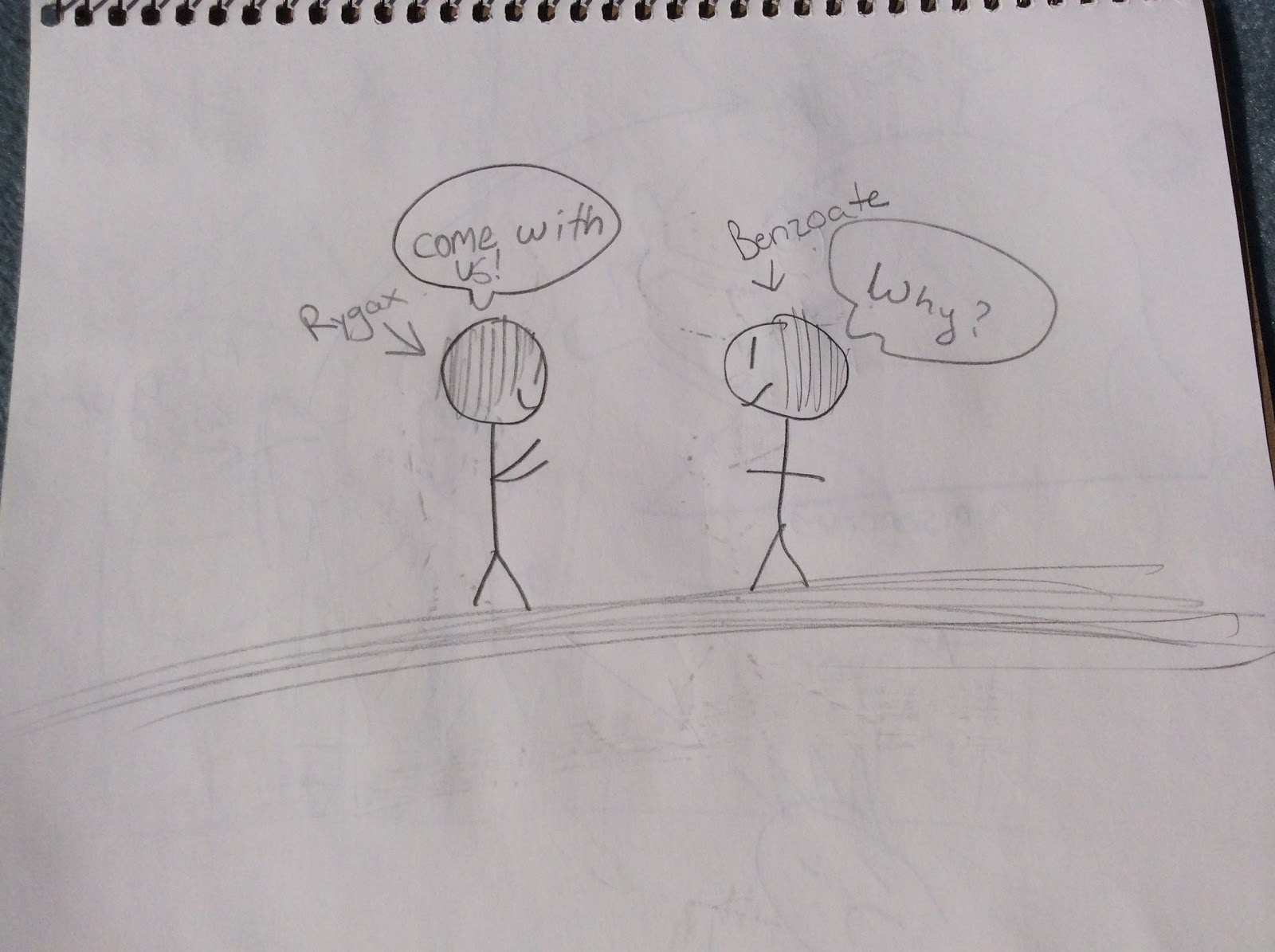 With Deathstroke and Domina deciding to take a break from exploration, Rygax started asking around, hoping that there were other adventurers in the town of Druissi that would be interested in offering their services to venture into the depths below.  Benzoate, a local Jack, had no problem talking to Rygax, but seemed rather disinterested in exploring.  Rygax was completely perplexed, but believed that Benzoate's skills and talents would be necessary for the dangerous events ahead.  Practically begging him, Rygax pleaded once more and Benzoate reluctantly agreed to tag along. 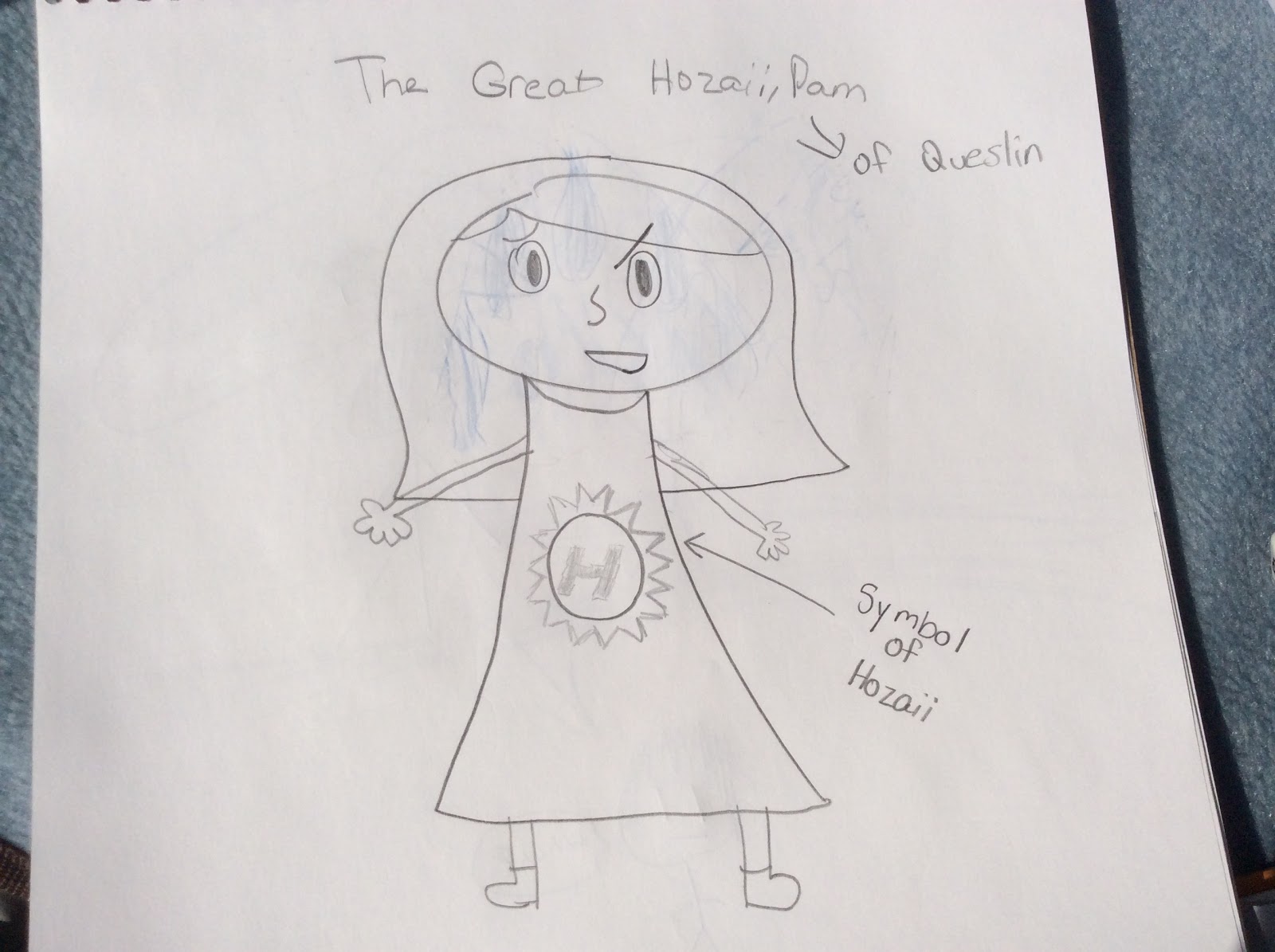 As soon as the adventurers entered the structure, however, they found that the path into the depths was blocked by a trio of Hozai cultists.  Benzoate recognized them from the town, and they clearly recognized him, but didn't take too kindly to anyone else entering the depths to their most holy shrine.  Using his quick wits and silvery tongue, Rygax was able (with a roll of a 20!) to convince the cultists that the party as sent by the Great Hozai Pam of Queslin to repair the structure, and ordered all three to report back to Queslin.  His speech was legendary:

"Well Thaybis, Racknoi, and Tim, the Grand Hozai Pam is very grateful for your devotion to this site, and asks that you meet her in Queslin for your reward." 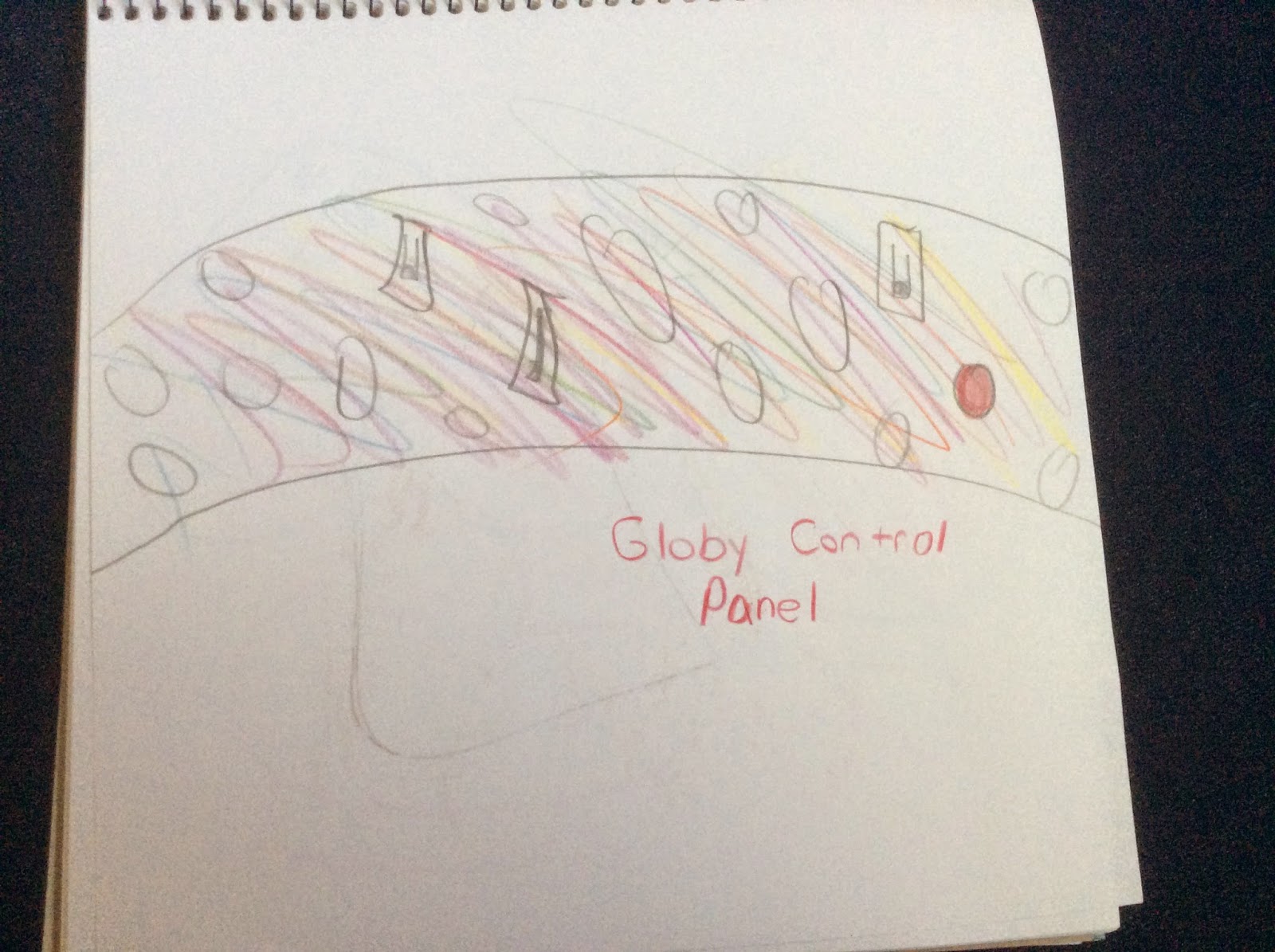 The party continued their exploration and found a control chamber to the front of the structure, which they were slowly starting to realize was a craft of some kind.  In the large triangular room was a control panel full of globular triggers and plates.  Before scavenging for cyphers, Benzoate pulled several of the globs away and began playing with them.  Noting that interacting with the globs made noises throughout the craft, "DJ Disco" Benzoate played away much to the rest of the party's amusement before pocketing the items as oddities for further investigation.  Also in this portion of the structure the party found a hastily scrawled note from previous explorer that read "heat heals fissures".  There was a picture of a device on the back of the note as well.  Whatever was wrong with the craft, perhaps there was a way to repair the damage through the careful application of fire. 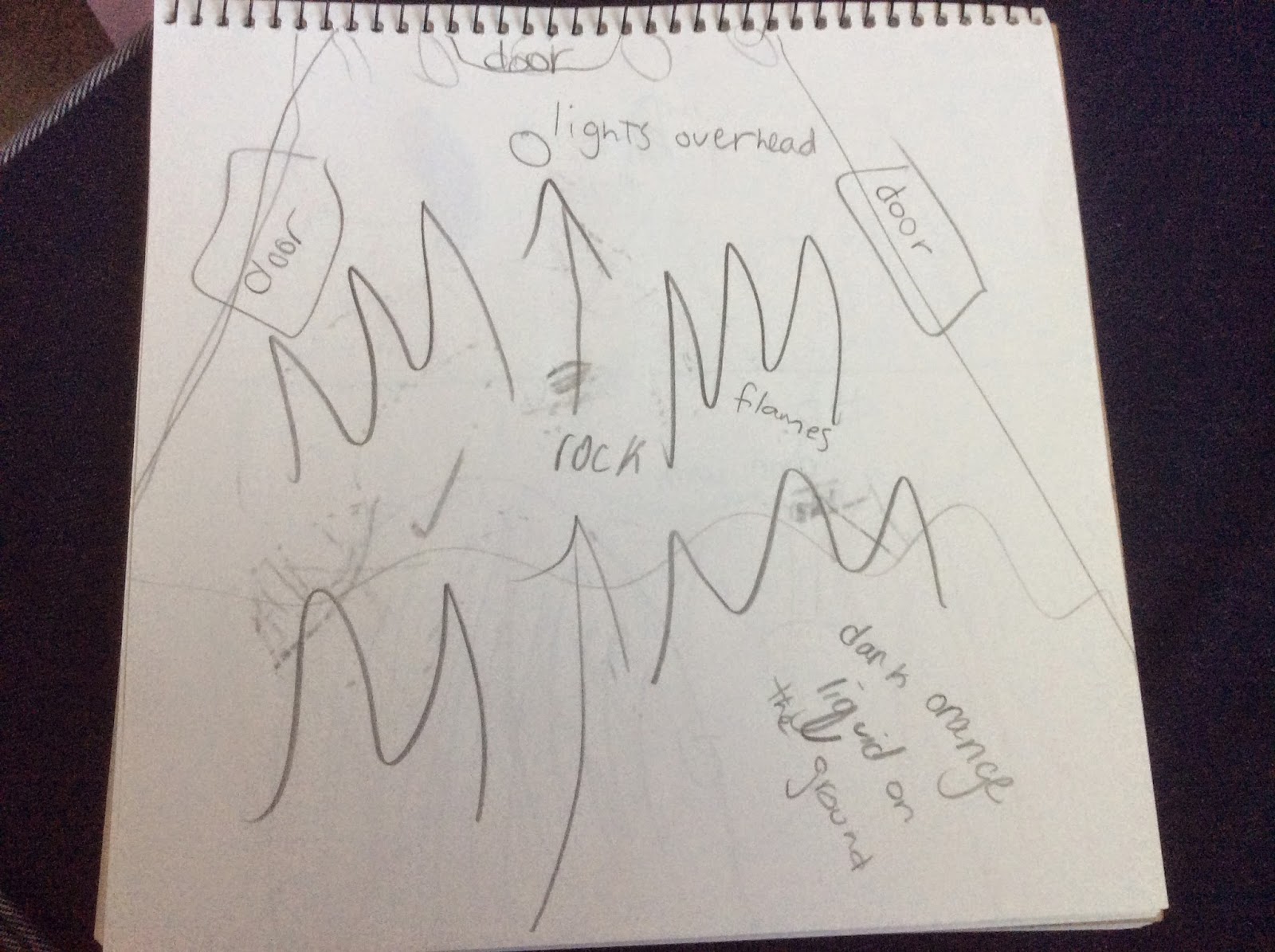 Moving to the south of the structure, the party found an unlocked door.  When Rygax sent his "third eye" into the room ahead, he found a long hallway with the leaking yellow substance coating the floor.  At first figuring the room relatively safe, the party opened the door.  Fearing traps, though, the careful Rygax tossed a stone down the hallway realizing that there were indeed fire traps all along the left hand side of the chamber.  A control panel on the far side of the hall seemed an easy target for the DJ's crossbow, and with a single shot he was able to disarm the devices… or so he thought. 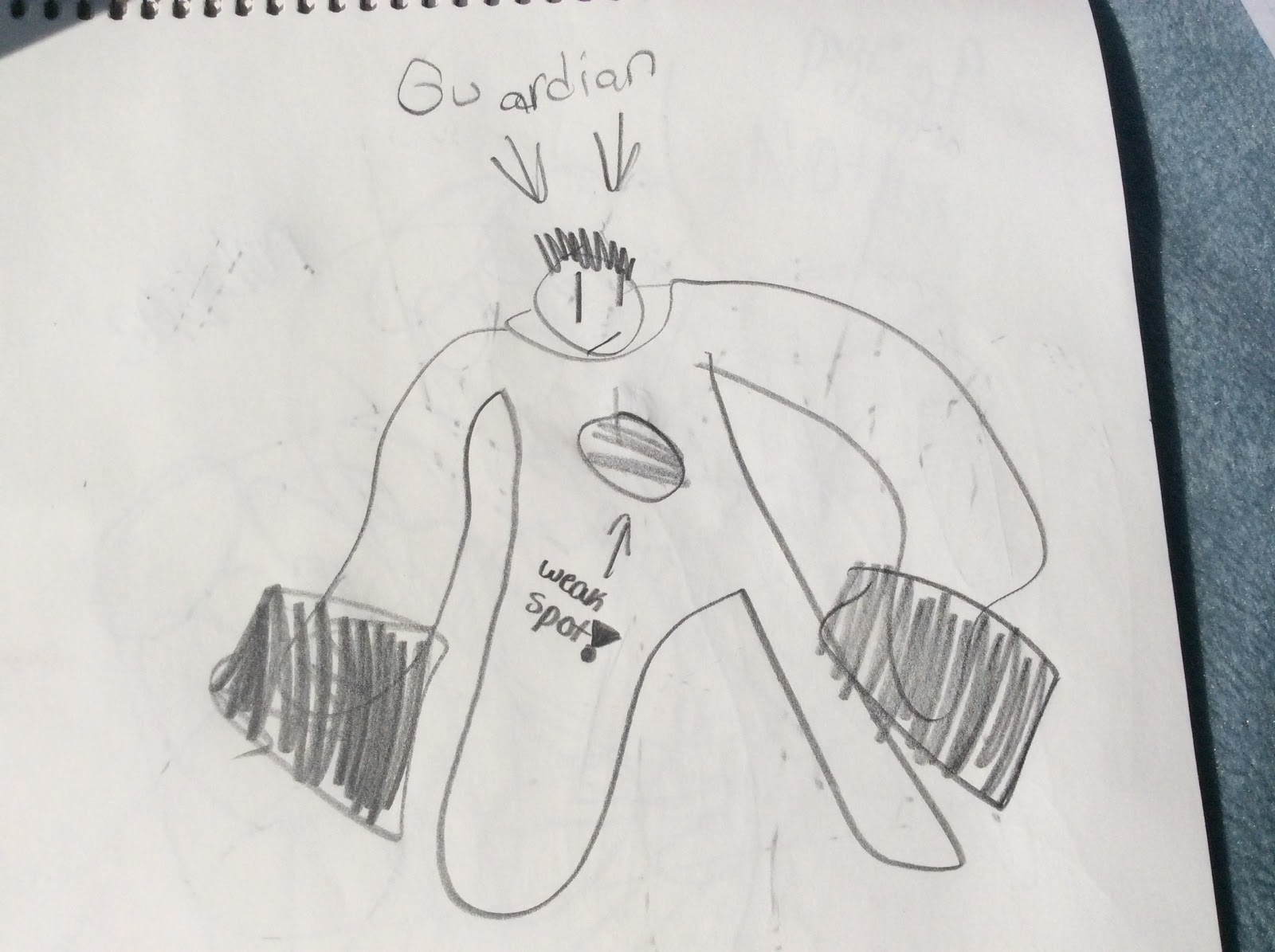 As the party moved into the chamber further, the door behind them closed and locked and in front of them a giant guardian automaton entered the room, wielding two shields and an extremely irate attitude!  The construct started smashing the heck out of the party, and despite their best attacks they could do little to get past the thing's armor.  Rygax was able to rush the creation and sabotage one of the arms, which did help their chances, but in the end just gave them enough time to use the disk key they found the day before, and unlock the door to the left. 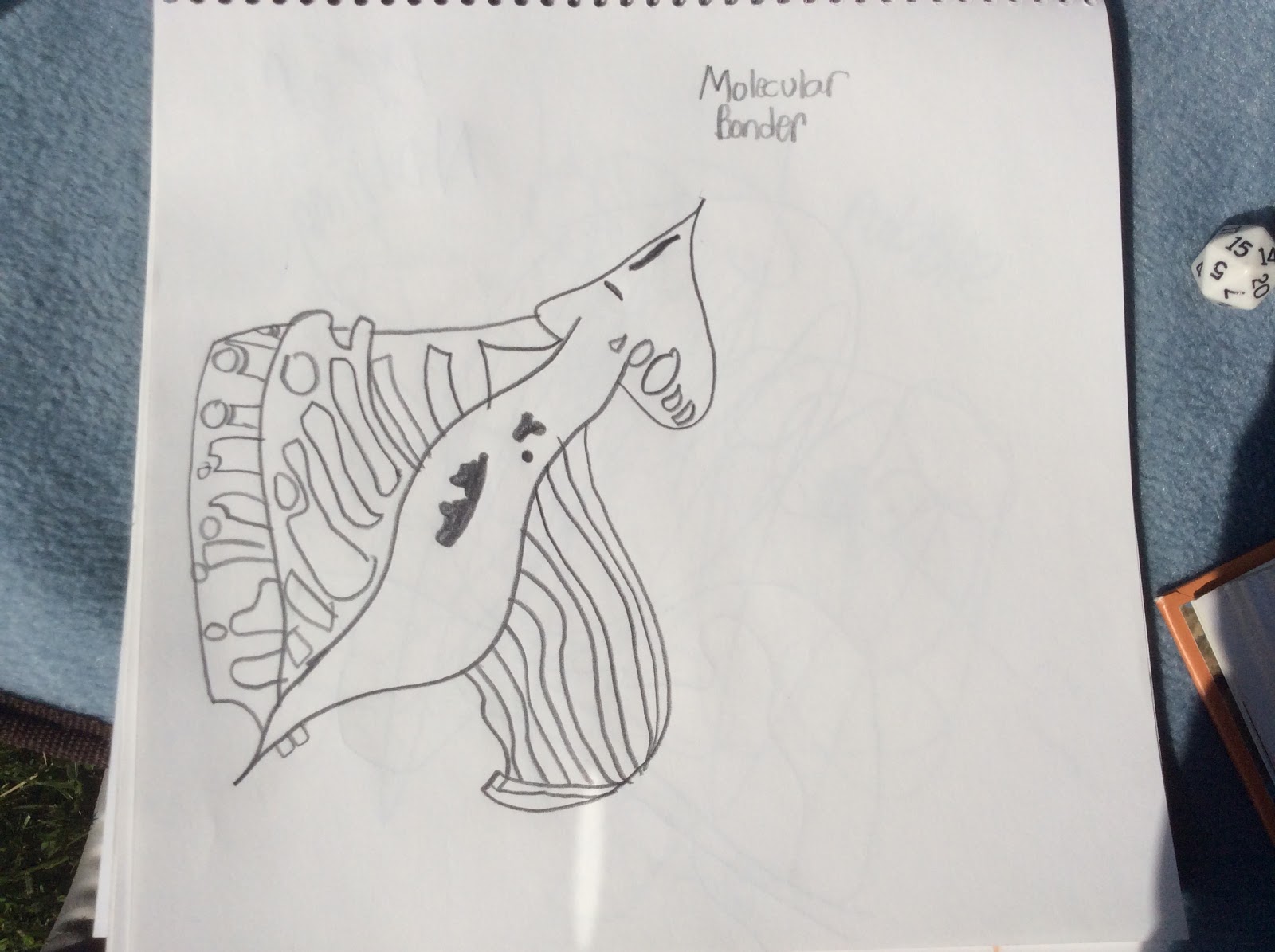 Quickly the party moved into the next chamber, a room full of wreckage and damaged materials, locking the automaton in the hallway behind them.  Fearing that they were trapped, they realized that at least there was another door to the south which would allow them to further travel within the craft.  Further exploration of the room also led them to a weird artifact of great value.  A Molecular Bonder, which looked identical to the drawing on the paper they found in the control room, was hidden in some of the rubbish of the room.
Moving into the next chamber to the south the party found a giant and strange tank full of the yellow liquid and odd fish taking up much of the room.  There were three regular exits from this room that led back into the craft, but also a large crack in the wall to their left which led into the hillside itself.  The opening of the passage seemed large enough to allow the giant Travonis Ul tentacle monstrosity access to the room.  And the monster was waiting for the party, sitting atop the tank eating the weird mutant, energy providing fish happily.  The creature didn't seem thrilled to see the party of Numenera hunters, so it quickly charged DJ Disco Benzoate with it's flailing tentacles. 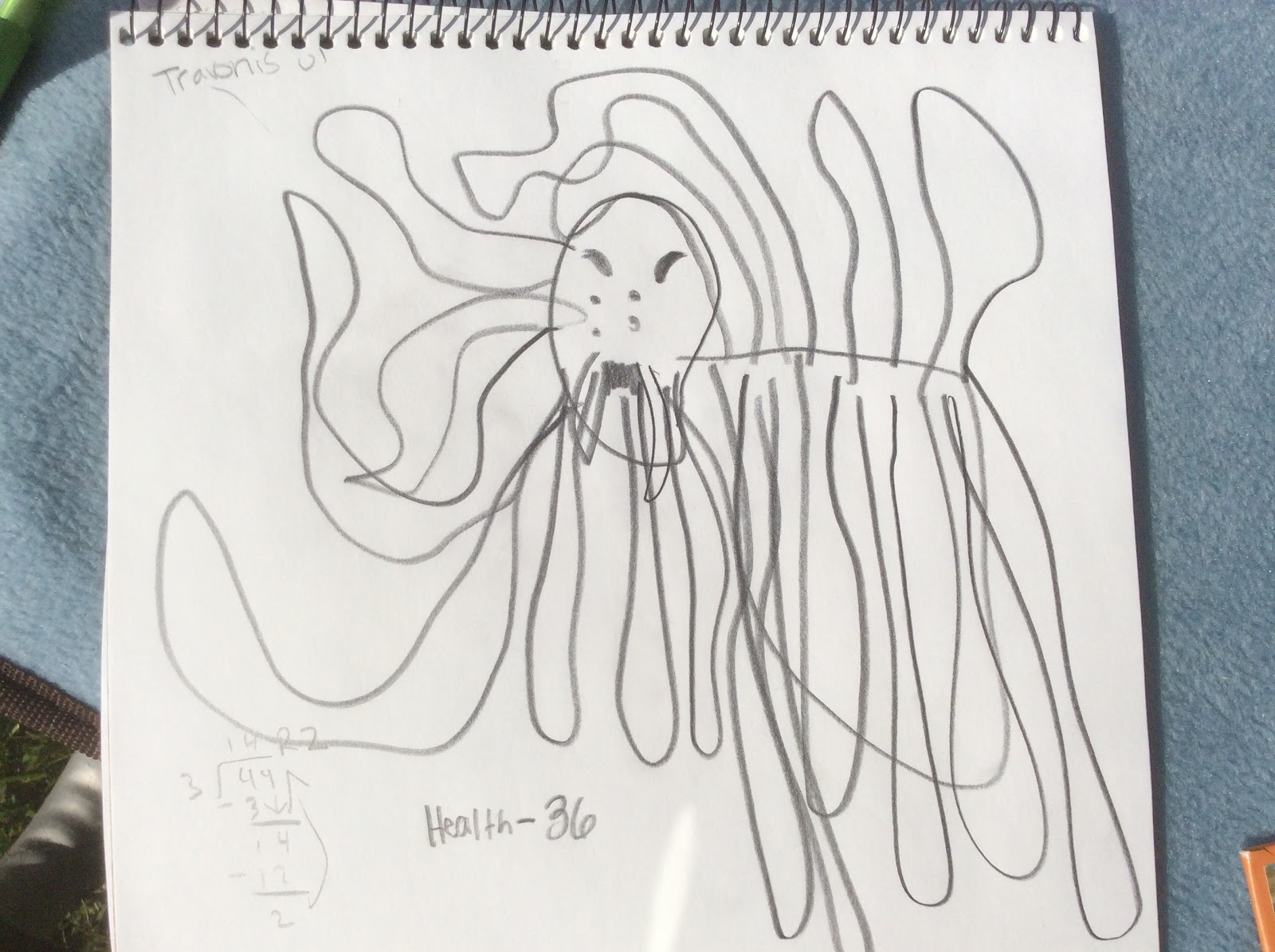 When the party realized that the beast could hit all of them at once with it's tentacles, they knew that they could do little to dispatch the travonis ul.  Thinking on his feet, Rygax realized that the chamber was connected to the hall where the guardian automaton was still trapped.  Benzoate threw his incredibly powerful (level 8) sleep inducing gas bomb at the tentacled beast, putting him to sleep.  This allowed Rygax time to run over and allow the guardian automaton to enter the room.  Running past the travonis ul, Rygax woke it up with an arrow to the noggin just in time for the walking machine to take notice.

The battle between the travonis ul and the guardian automaton was insane!  Tentacles smashed against shields, and gnashing teeth met electrical charges.  While this occurred, Rygax used the molecular bonder they found to repair the damage to the leaking yellow "fish-tank".  Eventually the travonis ul succeeded in tearing the automaton apart, but was left incredibly bloody, with dark purple pools surrounding it's form.  Vectoria turned on her fiery shroud and started smashing away at the beast with her sword-staff while Rygax and Benzoate fired arrows and bolts.  The creature was still incredibly dangerous, hitting each of the characters repeatedly with pain inducing tentacles.  But Vectoria's blade was too strong, and fires too hot.  After one final blow from the sword-staff, the travonis ul tried to swing away at Vectoria one final time, but found itself incinerated by the glaive's fiery aura.

With the tank repaired the party travelled back to Druissi, where they met the great appreciation of the town and the Mayor.  But where to go next?