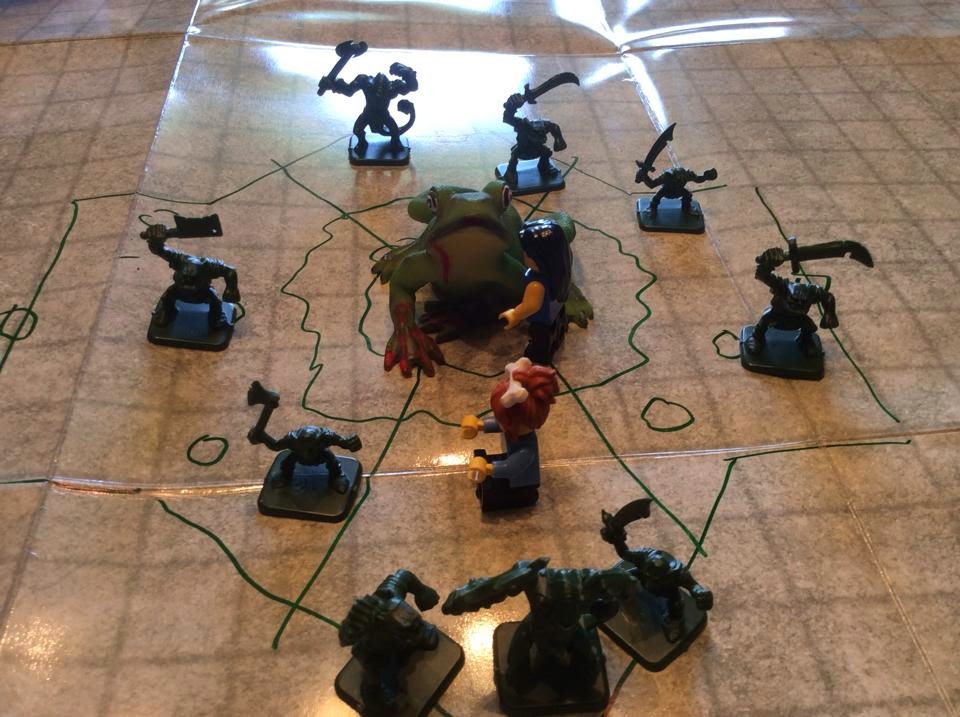 The Princesses and the Frog, Part 3 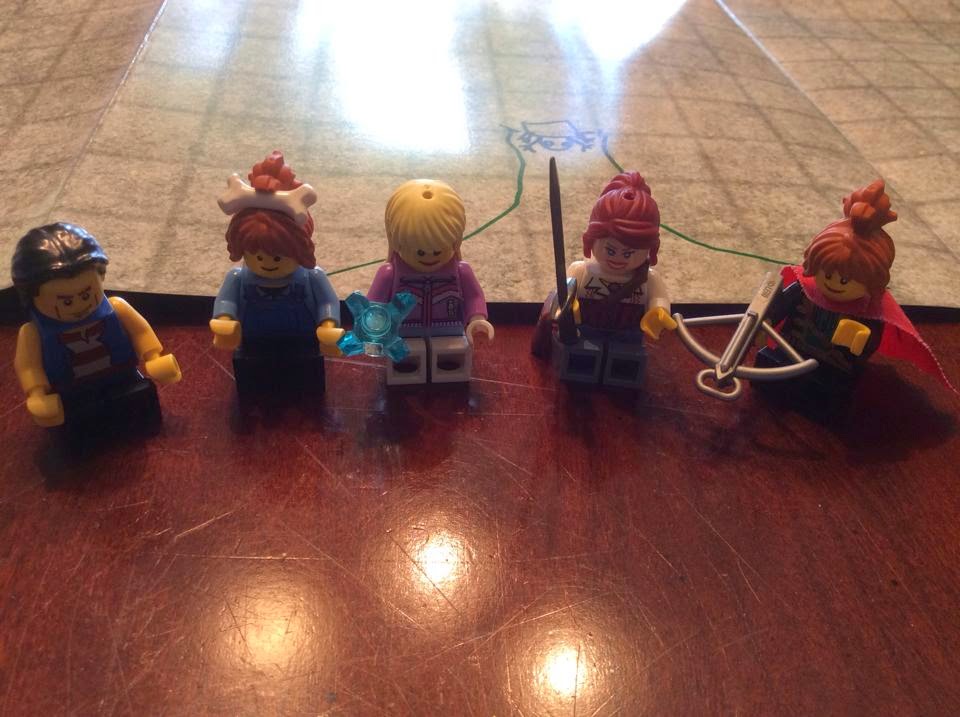 From left to right, my cousin Rachel, Rachel's fiancé Carmel, my wife Jen, my eldest daughter Carrie, and my younger daughter Evie

A billion years beyond "once upon a time" the Three Princesses of Nihliesh met up with two travelers from the Steadfast, Kronk and Vanellope, just before entering the Temple of the Frog to confront Kermite's father, the Frog King.  Kermite had been waiting a very long time for this encounter, and it was the amphibian abhuman's dream to finally return home to the Temple, which was also his mother.  Luckily for the Princesses, their two new friends had some very unique skills.  Vanellope had the amazing ability to "glitch", allowing her to move quickly and erratically, leap long distances with ease, and make her allies equally hard to strike.  Kronk knew how to cook.  The first obstacle at the base of the Temple was the strange and unusual doorway.  A massive stone portal, there was a large frog easily five feet high that was attached to the front of the door, with it's head and arms sticking out, while it's feet were at the bottom.

The frog was a part of the door, and seemed to be waiting for something.  With no other way to open the door, no levers, handles, or triggers, Kronk quickly started to cook up a "fly pie".  With insects gathered by the rest of the party near the swamp, Kronk took the raw materials that he kept in his satchel and crafted a very fine puff pastry with layers upon layers of baked bugs.  When the pie was offered to the frog-door hybrid, it opened it's mouth, first a little and then more.  In the blink of an eye the frog fired it's tongue and grabbed Kronk's hand, trying to pull not only the pie but also the glaive's arm into it's gullet.  Luckily for the team of Numenera hunters, Kronk was incredibly strong, and easily pulled his limb from the door's mouth.  Satisfied with it's meal, the frog dissolved back into the door and all that was left was a simple stone structure.

Using her glitching abilities, Vanellope started to merge with the door herself.  Within moments she was on the other side of the portal, but it was incredibly dark.  Engaging her cat's eye cypher so that she could see in the dark, Vanellope pulled a nearby lever allowing the rest of her team to enter the temple.  The team encountered a long hallway, and at the end was a large chamber.  At the chamber's center was another frog, but this one was extraordinarily large.  Standing nearly ten feet high, with wires coming out of it's form and attaching to the nearby walls, the party was not sure if it was a construct or some kind of creature in stasis.  It was the heart of the temple, the Frog Queen!  Mucous ran down the Frog Queen's form into a pool at it's feet, and thousands of little tadpoles splashed about in the artificial pond.  Surrounding the pool were weird mounds implanted within the dirty floor, each with a single sprout jutting out above the surface.  Not knowing what these could be, the party chose to move forward and investigate.  Shockingly the sprouts were not plants, but buried golthiar, plant-wardens made of wood, grassy fibers, and a single long eyestalk.  Their limbs ended in sharp spikes and blunt shields.  Nine of the guardians erupted from the ground, and began attacking the intruders. 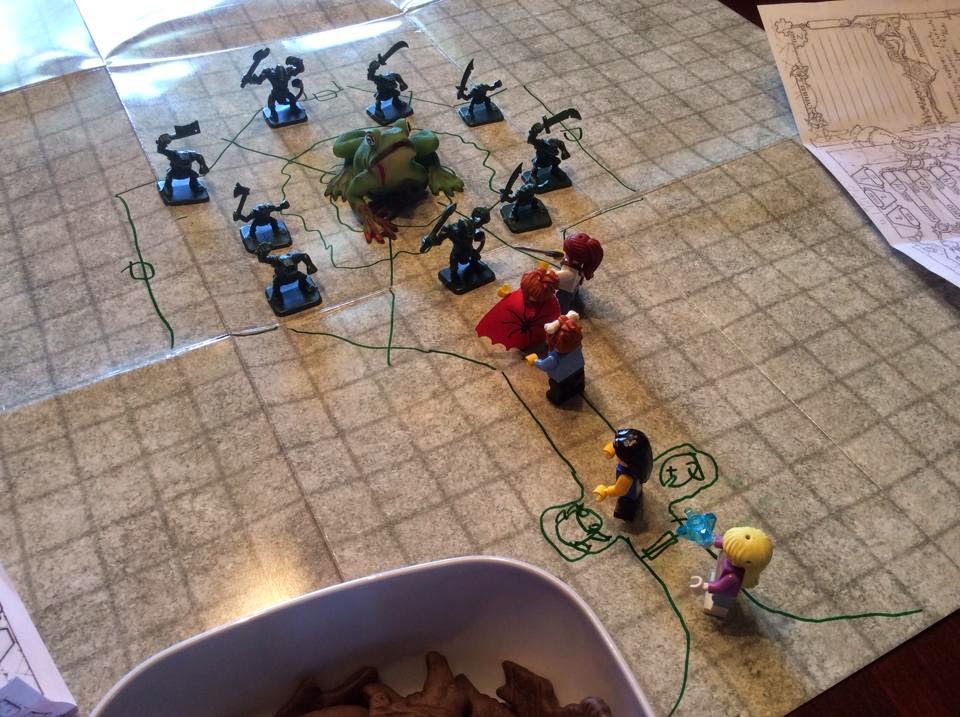 Kronk bravely ran into the room, and then quickly climbed out of combat and up onto one of the wires attaching the Frog Queen to the wall.  The golthiar then charged Anna, and the largest stabbed Anna and kept pushing her forward, using the long piercing appendage to skewer Elsa as well.  Vanellope decided to act on impulse and far stepped straight into the room, quickly finding herself surrounded by the plant guardians.  Merida, seeing her teammates having a difficult time in combat figured unwisely that the best course of action would be to shoot the Frog Queen.  Being an incredible shot, the archer's arrow penetrated the skull of the Frog Queen "killing" it instantly.  Immediately the rest of the party started to scream at Merida, as this attack not only infuriated the golthiar, it also completely invalidated all of the work the party had done to get to this point.  Thinking on his feet for once in his life, Kronk came up with a crazy idea.  One of his oddities was a living human nose on the end of a small glass stick.  Kronk pulled the nose off of the stick and attached it to the back of the arrow sticking out of the Frog Queen's nose.  This did… something… and he thought he was on the right track. 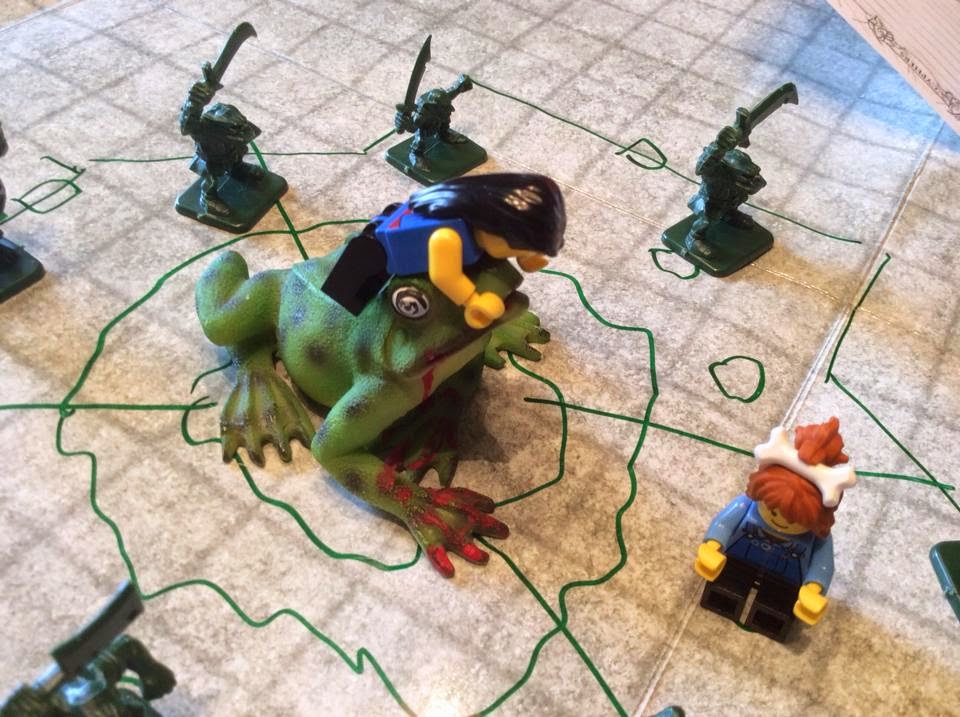 Meanwhile the rest of the team was still fighting golthiar.  Vanellope used a cellular disruption detonation device to injure five of the monsters, making them easy pickings for Merida's bow.  Elsa split her time between attacking golthiar with icy blasts and helping Kronk by affixing the nose to the Frog Queen's visage through frost.  Anna chased down one of the golthiar with her crossbow, killing it with a rapid succession of quarrels only to be surprised by one of the guardians that the party had already written off as dead.  This creature impaled Anna and then died, with it's arm still sticking out of the jack's shoulder.  Kronk kept three of the golthiar from ascending the Frog Queen's form by sitting atop the great creature's back and swinging his maul.  While having such a good vantage point the glaive saw something interesting: an access panel!  Calling down to Vanellope, who had just emerged from the tadpole pool after a particularly brutal assault by a trio of plant guardians, Kronk directed his teammate to climb up to the panel.  Once past the outer door, Vanellope found herself in a control room where a massive view screen showed a comparison of the Frog Queen's DNA compared to that of the living-dead nose that Kronk had stuck to it's face.  Vanellope hit a bunch of buttons, engaging some kind of gene-splicing, and the rest of the team watched in horror as the Frog Queen began to grow the features of a bearded human male! 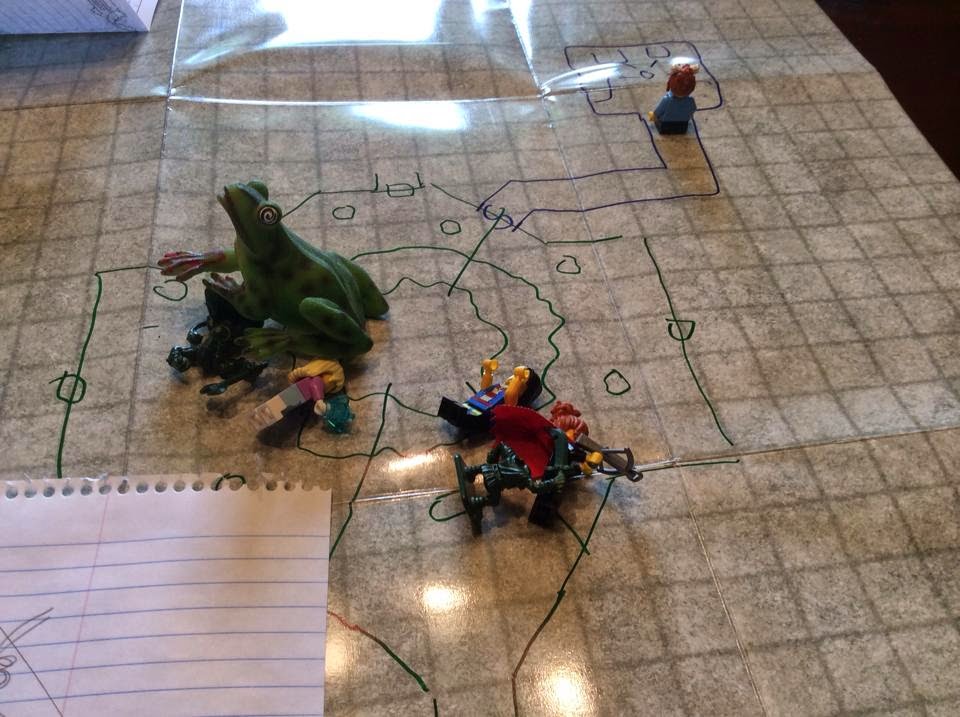 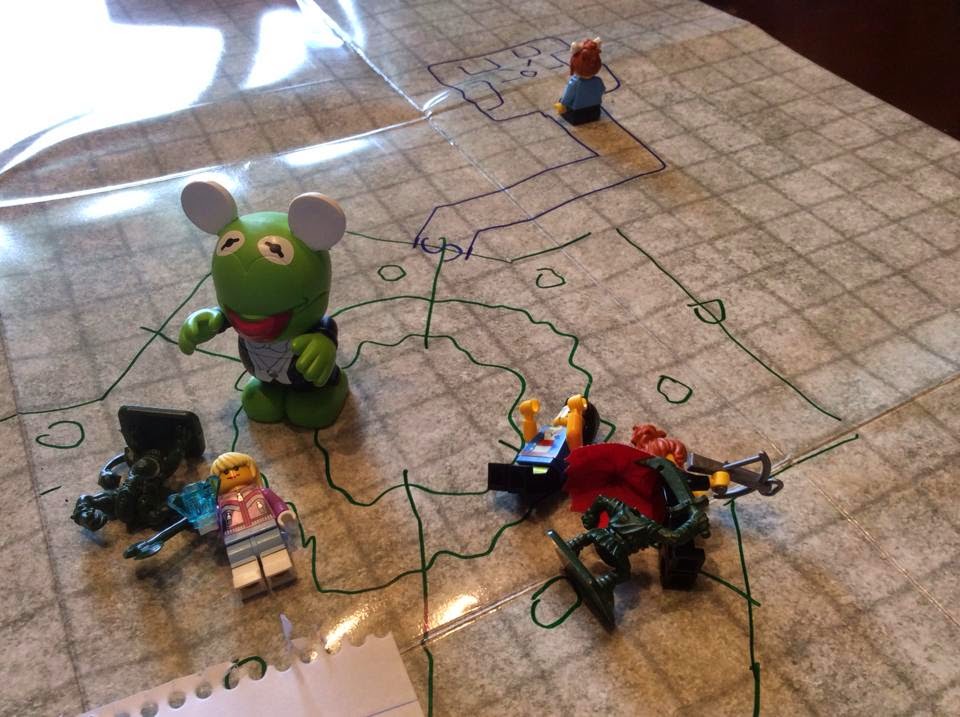 The man/Frog-Queen hybrid was screaming in pain and terror, but at least it was alive!  The team backed away as the monstrous fusion as it smashed the remaining golthiar.  Thinking on her feet, Elsa ran out and grabbed Kermite, dragging him back into the room to soothe his "mother".  Although at first horrified as the Frog Queen had grown a head of hair, a beard, and human hands, Kermite finally found himself in his mother's arms and that act of love healed the long dormant creature's pain. 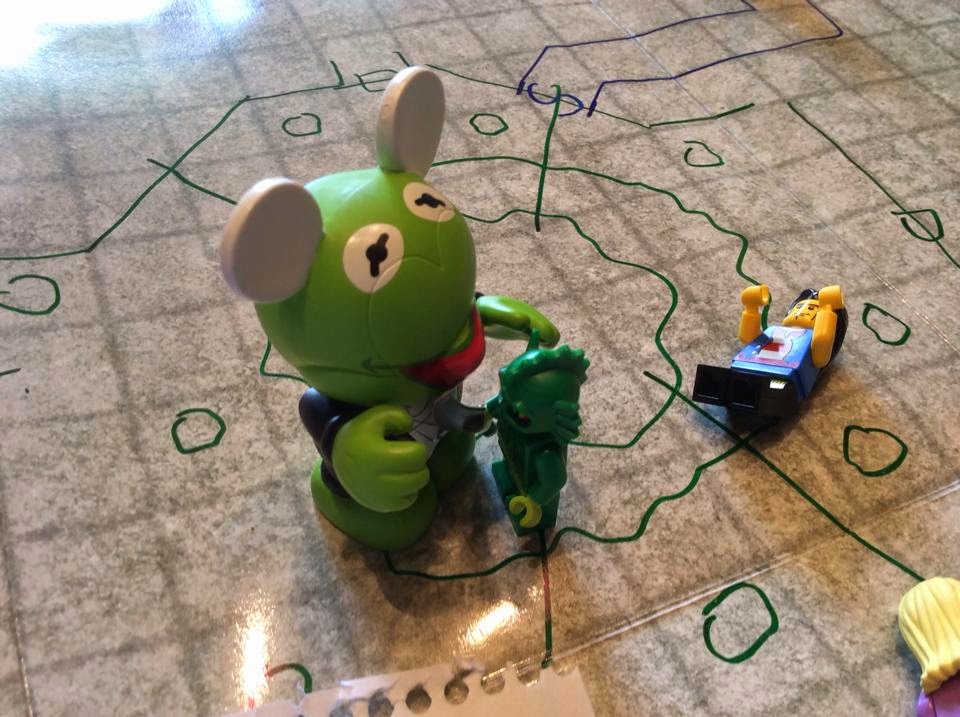 This action was not acceptable to the Frog King however.  Emerging from a chamber to the north, the Frog King was an equally massive nightmare with two eyes, each eighteen inches across, that were both capable of floating away from the king's head. 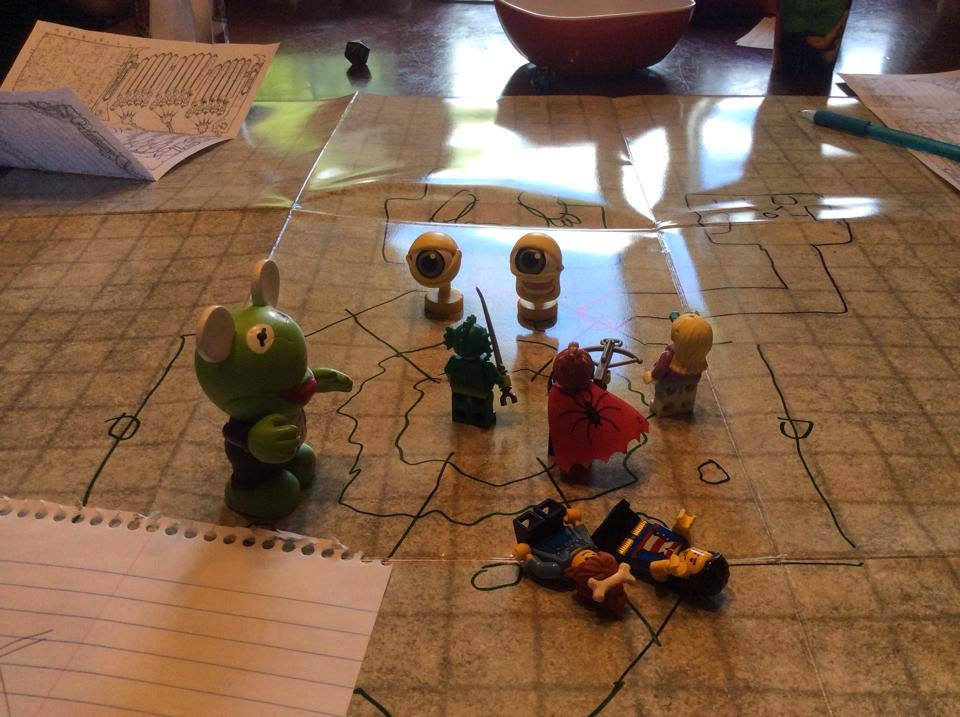 Not even wanting to deal with the horrors that the Frog King could bestow, Merida stepped right up to the floating frog-eyeballs and in a firm voice started scolding the monster into submission.  Fearing for it's life, the Frog King backed off, and offered to give the party an artifact to leave the temple.  When the party accepted, the king allowed Kermite to hack off one of it's floating eyes and hand it over to Merida.  The princesses had no idea what the Eye of the Frog King could do, but they were happy to take it with them.  By this time Kronk had been cooking up some fresh potato chips on a makeshift fire pit, but he had used water from an Evolution Pool attached to the main chamber.  Figuring that consumption of the chips could alter or mutate the diner, the rest of the team passed on this meal.  The Frog King, Queen, and Prince had been reunited, and peace was returned to the Caecillian Jungle. 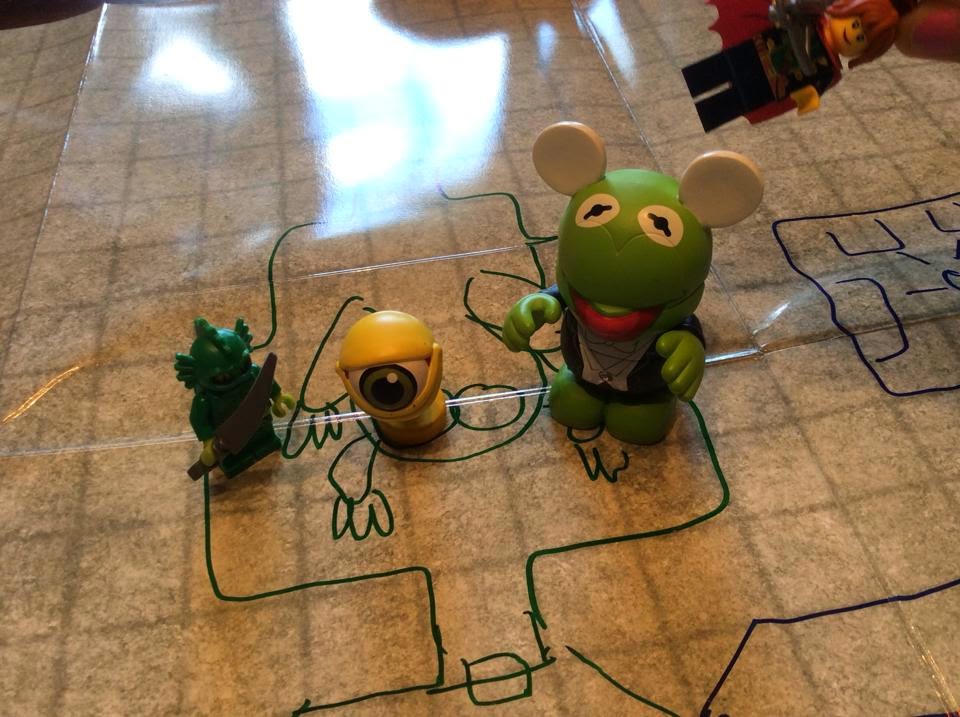 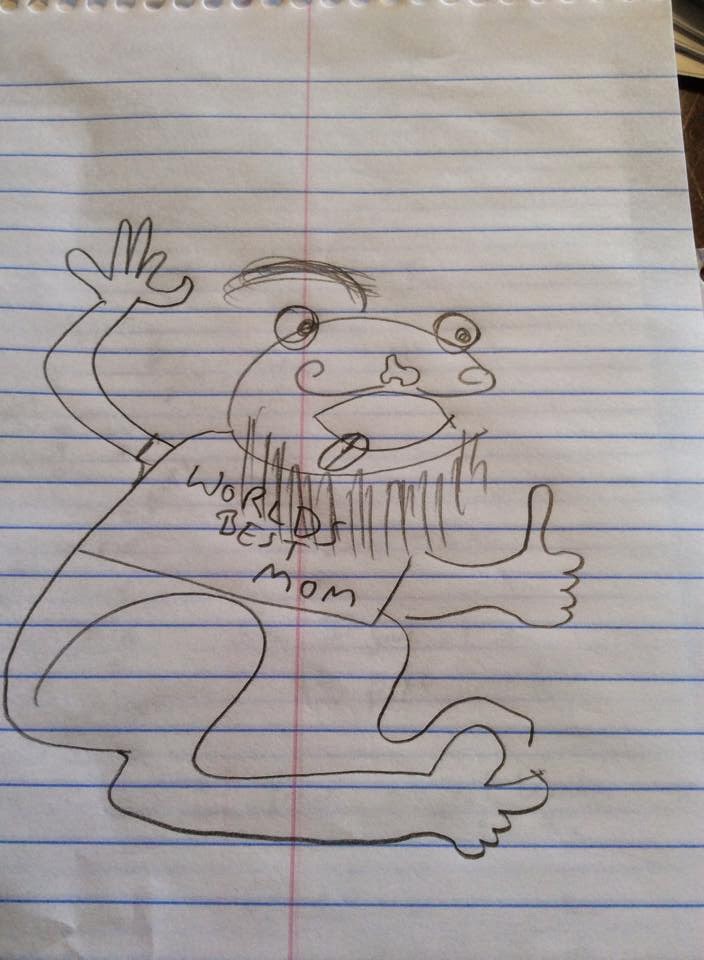 "Do you want to build a frog maaaaan…" - Evie singing before the game.

"Gan I give it a fly puff?" - Carmel began the game role-playing Kronk effectively.

"You're a jerk, Kronk!" - Vanellope didn't like how her fellow party-member just left the battle.

"So its like a 'sister kabob'?" - Rachel comments on the golthiar stabbing Anna through the belly, and then stabbing Elsa with the same spearing strike.

"The door ate a fly-puff…" - Carmel's proof that anything is possible in Numenera, and maybe Merida shouldn't have shot the Frog Queen

"I thought it was fake!" - Jen refused to take blame for almost ruining the adventure.

"Do we need to do 'snot to mouth'?" - Jen was reaching for ways to save the mission.

"Take this as an opportunity to have a pet!" - Carrie to Evie after Anna got impaled by a near dead golthiar and the creature was stuck to her back.