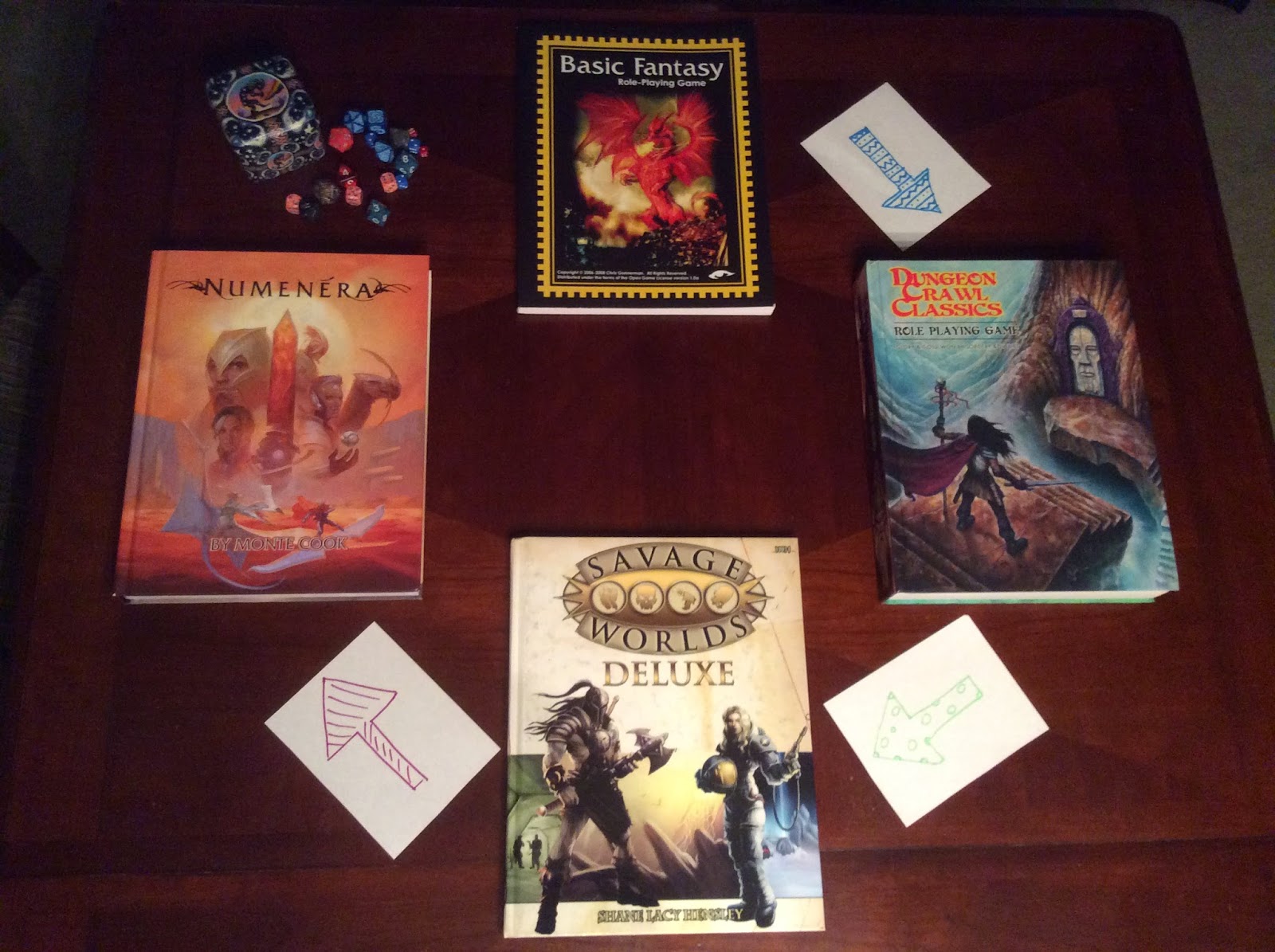 A Year in Review… sort of…


With 2014 coming to a close and 2015 on the horizon, I spent some time over Thanksgiving vacation reflecting on this tremendous year in gaming.  I ran nearly 80 RPG sessions in 2014, celebrating some of my very favorite games.  My players explored Krynn with Basic Fantasy RPG, battled Gallic Werewolves in Savage Worlds Weird Wars Rome, and brought the characters of Frozen to life in the 9th World of Numenera.  I went from barely playing once per week to regularly GM'ing 3-4 sessions, online and offline.  Most importantly, between my time spent on Google+, Facebook, and Twitter, and then my amazing trip to Gen Con 2014, I've had the opportunity to meet and collaborate with some phenomenal gamers.

So at the end of this year and the beginning of the next I want to try and outdo myself again with a special series of posts, but I couldn't settle on a single system.  So I chose all of the above:

Back in September I posted about my quest for old school fantasy gaming, and my interest in Old School Renaissance (OSR) fantasy titles.  If I have one regret this year, its not being able to spend as much time as I would've liked with Dungeon Crawl Classics by Goodman Games.  Now I'm looking to rectify this issue, and later this month I'll be featuring an incredible "That 70's Game" that I'm running at my house!  Not only will we be playing Dungeon Crawl Classics, most of us will be dressed for the 70's as well.

I'm sure it'll be… embarrassing but memorable.

Well, I was reading the DCC rules Thanksgiving weekend to refresh myself on all the idiosyncrasies of the game, but I was having a hard time picking a background setting.  I'll be running Sailors on a Starless Sea, and don't need a formal campaign setting, but its just a personal preference of mine.  Then I thought how cool it would be to find a setting, and then run a DCC game at the same time as a Basic Fantasy RPG game, either one after the other or at the same time, just to explore and experience the differences.  Chris Gonnerman just released the print-version of 3rd Edition BFRPG, so giving those folks a little spotlight would be great.  This led me to thinking about how Savage Worlds could handle an OSR fantasy game, and I wanted to run a session or two of that as well.  But Numenera and/or The Strange could easily handle OSR games too, especially if I were to use Ryan Chaddock Games' The Translation Codex for setting appropriate foci!

… until I realized that its the holidays and I have a little extra time!

This is the basic outline:

Throughout the entire mini-campaign it would be the exact same characters (unless someone dies… I will have to think about that, especially with DCC) and the exact same setting.  From game system to game system, this would be an exploration of mechanics -  not some dimensional hopping adventure.


That's Where You Come In


I'm looking for the following feedback for this idea-seed:

Feel free to respond to this blogpost or message me on Google+, Facebook, or Twitter.  If you have a great idea I'll make sure to give you a nod!

I already have to thank my pal Marc Plourde for the recommendation of using mid-level characters rather than entry level, and possibly keeping them the same power-level through all 8 sessions.  Make sure to check out Marc's blog Inspiration Strikes for more introspective posts on RPG'ing (Nuts & Bolts) and some great adventure starters (Story Seeds).  You'll be glad you did!
Posted by Living 4 Crits at 8:13 PM