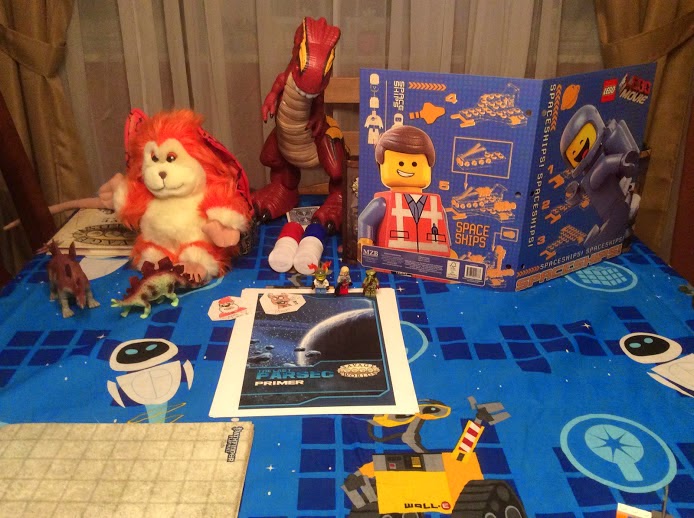 
Happy Holidays again from the Walls Residence!  Last week we had our Accursed game where the players had to take down a twisted and terrifying Santa Claus and free the enslaved wereindeer children.  Now in hindsight, it may have been a bit of a twisted take on such a Christmas tradition, but hey… this special season only comes around once a year.  For this next game though, the players had to save Santa from lacerauns (dinosaurs).  Maybe the idea of "saving Santa" rather than killing him will help keep the kiddos out of therapy later.

The Last Parsec is a brand new sci-fi adventure setting published by Pinnacle Entertainment Group, the folks behind Deadlands, Weird Wars Rome, and a whole bunch of other phenomenal settings that I love.  The Last Parsec consists of a trio of setting-PDF's that have just been released: Eris Beta-V, Leviathan, and Scientorium.  Sleigh Bells Ring No More takes place on Leviathan, a world-sized game preserve that holds some of the deadliest creatures in the known universe.  Think "Jurassic Planet" instead of "Jurassic Park."

… And yes, I know the next movie is "Jurassic World", which is why I had to write "planet" to make my point.  Nevermind.

Just like with our previous adventures in Another Sun Rises and the first Last Parsec excursion, some of our images and maps came from 0-hr art & technology, an incredible game design website that features awesome deck plans and artwork available for download.  If you'd like to pick something up for your space game, and like what you see here, make sure you check them out!  The S.P. Mk. 747 is based on 0-hr's "Midnight Rose."


You may remember some of the crew of the S.P. Mk 747 from their previous adventure in "Chow Time".  Recently they hired a new pilot to work alongside Wilma, but strangely never managed to get his name.  That's okay, the Man with No Name was a really great pilot, so he got to keep his job anyway.   The S.P. Mk 747 and its crew came to the world of Leviathan to drop off some passengers: big game hunters looking to spend a few weeks in-country.  But as the JumpCorp chartered vessel was about to blast off and depart Leviathan, a strange distress signal came across the comm.  Wilma, the small rabbit-like pilot and acting-commander tried boosting the signal from the command seat, but all she picked up was the sound of jingling bells, and then a poor, sad cry.

"Ho… ho… hooooooooo," the old man wailed on the other end of the comm.

Immediately Wilma alerted the rest of her team, and commanded the Man with No Name to head for the jingle-jangle-beacon while she prepared for an away mission.  Cold and mechanical Ari Gato was already pulling up the world-map of Leviathan when Wilma arrived at the science station.  The distressed vessel was a single small cargo craft, which had been towed by eight smaller drones before breaking up in orbit.  The cargo craft crashed on the continent of Borea, in an area known as the Amymonian Delta.  Unfortunately this part of the world was so saturated with rain and mud that landing a massive craft like the S.P. Mk 747 would be nearly impossible.  But insectoid engineer Raymond had an alternative plan: paragliding! 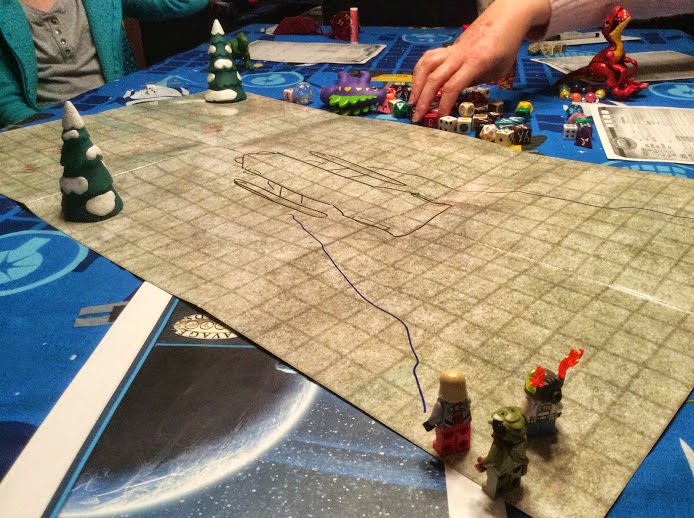 When the away team landed on the soft, mushy ground near the crash site, they were immediately on their guard.  The cold and numbing rain drenched them immediately, and though the sound of the storm silenced a lot of the other native fauna in the area, the roars of nearby Kroks could still be heard.  Some of the lacerauns were a few dozen feet high… some ten times larger!  Wilma, Raymond, and Ari would have to act fast! 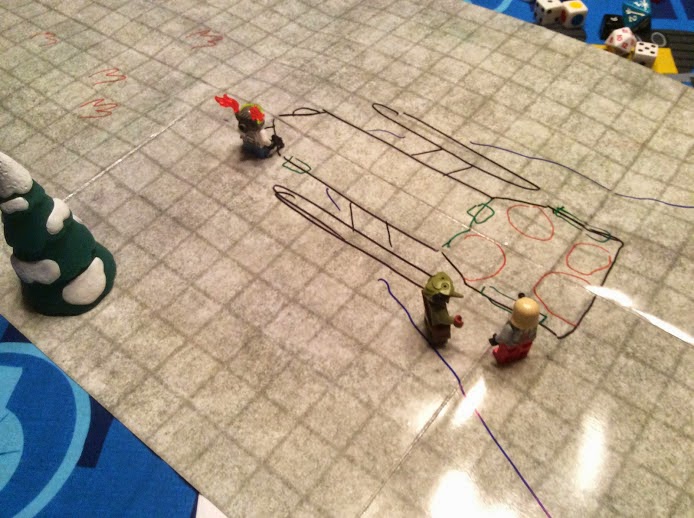 The cargo craft appeared to be some kind of transport shuttle.  There was a large storage compartment in the rear, and a long command and engineering section in the center.  Two very old ion drives were located on nacelles, but from the looks of it, they hadn't functioned properly in decades.  Raymond had seen similar ships, but it had been quite some time.  Perhaps that was why the captain of the vessel needed the eight smaller drones to "tow" this "sleigh."  Unfortunately, the remnants of the eight drones were scattered all about in front of the sleigh ship, still burning and releasing an acrid smoke that filled the air.  While Raymond and Ari Gato tried to open one of the cargo-bay doors, Wilma moved to the front of the craft and peeked inside.  There was a massive man, at least eight feet tall and about half as wide, slumped over the control panel. Behind him, a dormant droid resembling a clockwork deer was resting against a wall.

"He's unconscious," Wilma told her crew mates.  "We gotta save him!" 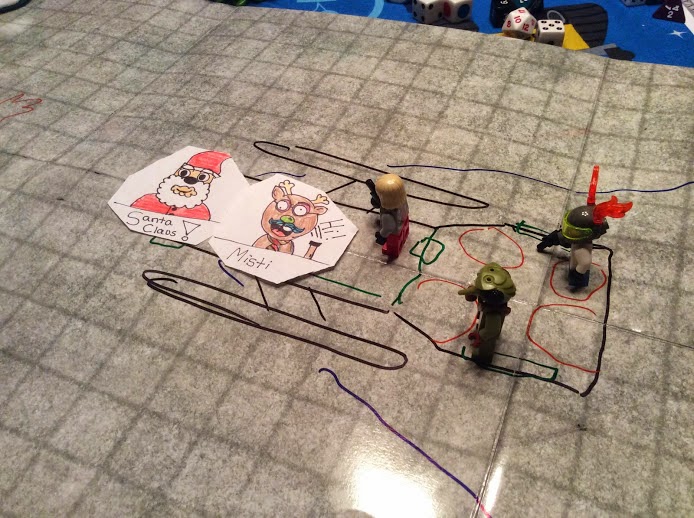 Once inside the ship, the trio was stunned by their findings.  The cargo hold was full of candy!  All kinds of snacks and treats, from an entire galaxy of worlds.  Even Raymond recognized a few.

"The famous Green Galaxy Goop!" Raymond texted excitedly across his comm, since insectoids can't talk.  "It's from my home planet, we like green things!"

Wilma moved into the command section of the ship, and motioned to Raymond to come forward and give the robot a look while she attempted to administer first aid to the large pilot.  It only took a few moments for the insectoid to sync his commlink to the construct, and after a simple reboot procedure, "Misti the Reindroid" was operational.

"Boing… buh… buh… boing boing… hello!  Happy Holidays!" Misti shouted as he came to life.  But the robot's exuberance faded when he noticed that his boss was critically wounded.  "You gotta save Sanda Qlouz!" he pleaded.  "Please hurry!"

Wilma was already giving the man first aid and CPR, and after a few more moments the jolly alien sprang to life.  When he awoke, there was a bright light coming from his cybernetic eyes, that filled the room with a soft glow.

"Oh, what's going on here?  Has everyone been good?" Sanda asked.  The man claimed to be a Kringilian, an alien species that travelled from world to world sharing holiday traditions from many peoples, many cultures.

Knowing that time was limited, Ari Gato answered tersely.  "We've been awesome, but your ship here has crashed."  The construct quartermaster starting spinning up the ship's control panel while she spoke, but was rattled when a loud thumping came from outside.

Since it was her job to scout, Wilma carefully crept up to the front window and got a look at a fifteen foot tall Krok standing nearby, eyeing up the sleigh-craft.  Knowing that she and the rest of her party were armed with advanced weaponry, including laser submachine guns and Ari's powerful flak launcher, Wilma felt safe for the moment…

… and then a much louder booming was heard. 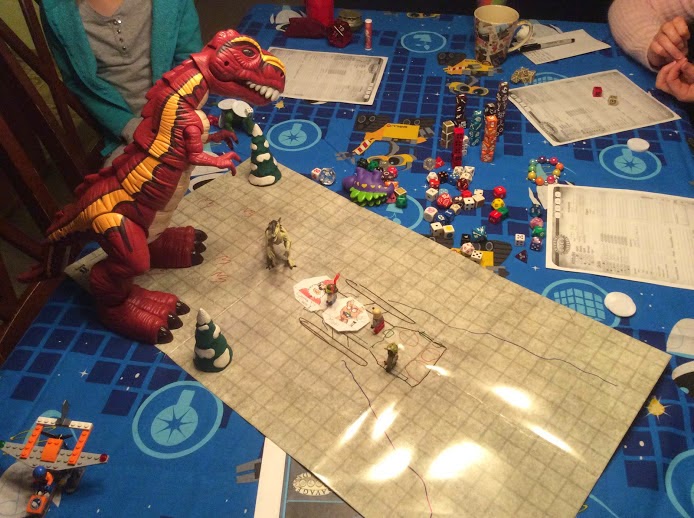 A much, much larger Giant Krok appeared, and it was looking for a meal.  The smaller Krok was "talking" back to the massive beast in a series of barking roars.  It was getting pretty crowded outside, so Ari, Ray, and Wilma hatched a quick escape plan.  Ari called up to the Man with No Name and instructed him to bring the S.P. Mk 747 down to the crash site, but to hover just a few hundred feet above. 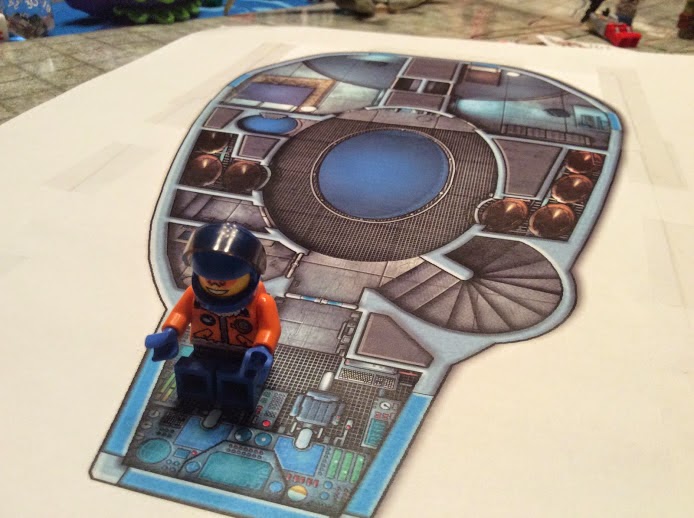 The Man with No Name had nothing better to do, so he agreed to bring the ship down for his part of the rescue mission.  Since the sleigh-craft was stuck in the mud little Wilma crawled under the craft and attached her hover-board to one of the nacelles, which worked to shimmy the ship free of the sludge.  Inside, Raymond continued to repair the ancient craft while listening to all of Sanda's excuses for not maintaining the vessel properly.  The plan was going very well until the "barking" outside stopped abruptly. 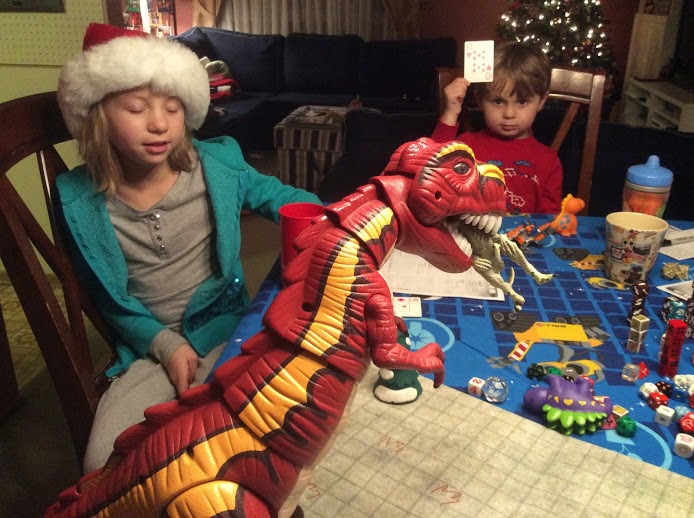 The Giant Krok was now eating the smaller Krok, but after only a few chomps, the massive beast decided it wanted something bigger… and possibly sweeter.

"Hey 'Man with No Name' you better get the move on!" Ari called over the commlink.  She then grabbed her flak gun and moved to the rear doorway.  There was a massive beetle-spider "colemata" (bug-like creature) behind the Giant Krok, full of guts, goop, and blood.  Ari wanted to pop the fleshy creature quietly, hoping that it's innards would gain the laceraun's attention.  To muffle her shot, the construct quartermaster shoved handfuls of cotton candy down the barrel of her flak gun.  With a quick pull of the trigger, the colemata beetle-spider popped like a zit, and the smell certainly gained the Giant Krok's attention. 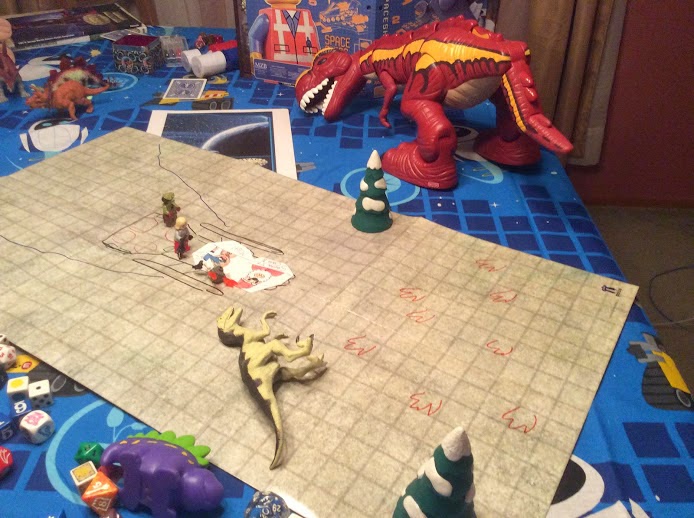 Raymond didn't want to wait for the Giant Krok to return, so he pushed Sanda out of the way and grabbed the controls.  The insectoid got the craft's thrusters running again, and with a pull of a lever the sleigh lifted up off the ground.  This was quite the surprise to Wilma, who found herself hanging precariously on the bottom of the sleigh-craft's starboard nacelle.  Meanwhile Ari had climbed to the top of the craft and was getting ready to catch the tether that the Man with No Name was going to lower from the S.P. Mk 747.  The large vessel was close now, just a few hundred feet away.

Wilma decided that she had spent enough time on the bottom of the vessel, and hand over hand she climbed towards the open portal.  Unfortunately the Giant Krok was back, and it wanted dessert… rabbit flavored dessert.  With a quick snap the beast had Wilma Hops in his mouth! 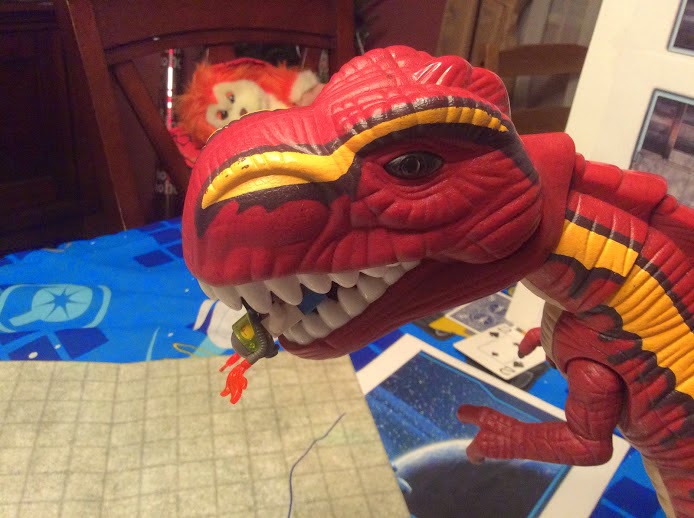 Wilma wasn't about to become dinner, however.  Pulling her laser submachine gun from her satchel, she pointed it into the Giant Krok's mouth and let loose a spray of auto fire.  When the beastie released its bite, Wilma used her leaping ability to spring free and dive straight into the open doorway of the sleigh-craft.  By the time the monster regained its senses, turning around for another snap, Ari Gato was waiting - flak gun in hand.  The construct stunned the Giant Krok with a massive blast right to the eye, causing it to stumble backwards.  Injured but not dead, somehow the Giant Krok needed to be stopped…

… that's when the Man with No Name arrived! 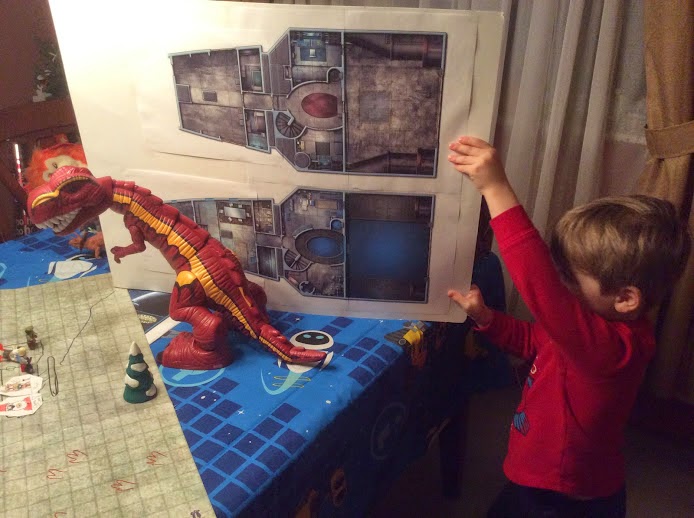 The S.P. Mk 747 flew down and slammed into the Giant Krok, breaking its bones, forcing it to the ground.  The Man with No Name then positioned the starship over the sleigh-craft, allowing Ari Gato to connect the tether.  From there, the JumpCorp team towed Sanda Qlouz's vessel back to the star port at Ralston, where true repairs could begin.  Sanda thanked the JumpCorp team for their help, and since they were such good little bunnies, bugs, and robots, he gave them each a special candy treat from his cargo hold.


I asked each of my three kids for a comment about tonight's game.  This was what I got:

Carrie:  "I think it was fun, and I liked how you used my character 'Misti'!"

My daughter Evie's character species is a custom build using the Savage Worlds Science Fiction Companion.  Hareraisers are daring and adventurous aliens who managed to survive and evolve on a world full of terrible predators.  Despite not being the biggest, strongest, or toughest creatures on their world, Hareraisers are quick, agile, and very capable of thinking on their paws.  In the Last Parsec universe, Hareraisers make incredible pilots, and are naturally suited for being behind the flight-yoke.

If this is your first chance to take a look at how our family did the Holiday Season 2014, you may have missed last week's session:

We did have a slight change in line-up due to the flu hitting our house pretty hard!  Right now we've moved Carrie's special Rudolph themed BFRPG game to tomorrow.  Here's what's coming soon: