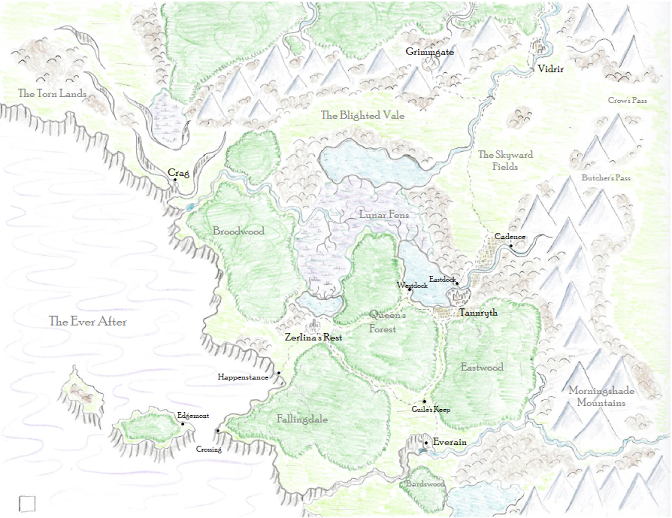 
Yes, I'm going with this title:  Tannryth: Realm of … Something.  I'm totally serious.  I have a list of what the "something" could be:  darkness, twilight, shade, entropy, and filth are just a few of the options.  Didn't like any of them, so I've just been referring to the setting as "QcC:TRo…S" to anyone who inquires.  As I've stated before, if you have a better title, please share!  I'm certainly open to suggestions.  +Marc Plourde gave me "Quattro con Carnage", so maybe you can be next in helping me craft a cool description of the world!

Since we'll be starting the campaign next Tuesday, and I have players creating characters right now, I thought I'd share a brief history of the setting, as well as some key details that may interest players and readers of the blog.  Earlier this week I reflected on my history with old school electronic gaming, and how it helped shape my earlier years as a fantasy gamer.  Since I envisioned Tannryth to be a setting that embraced everything I loved growing up as a gamer, both PC/Console and Tabletop, there are a few things I injected into this setting.

I wanted the world to be very similar to the Dark World in the Legend of Zelda: A Link to the Past.  There was a world of light and high-fantasy once, and the main race of humans comes from that place, but it is now gone, never to be found again.  I wanted a massive, mysterious, mist shrouded domain to take up much of the land, similar to the Evil Forest in Final Fantasy IX.  In Tannryth there is a feature called the Ever After, hidden from most of civilization and separated by an incredible rift called "The Fall".  The Fall also serves as a resource for endless dungeons and caverns, easily accessible as the world falls away into the Ever After, further revealing places to delve.  More to come on these features!


If you have any questions or comments, please feel free to share them!  Also, if you have any cool ideas that you think I should toss in let me know.


A Brief History of the Tannri

by the Elven Sage Qualanthorus

There are two human civilizations in the the realms surrounding these realms, the northmen commonly referred to as "those of the Icerift" or "Rifters", and the people of Tannryth.  For the purposes of this history we will just be looking at the the latter, for they are the newcomers to our strange land, having only arrived in the last three-hundred years.  The "Tannri" came from a faraway place known as Tannryn, sealed from our world by a gate through the Brilliance.  Tannryn came under attack by forces form beyond and waged a long-fought war against this unusual and terrifying opponent.  Eventually the enemies were at Tannryn City's gates and the Queen had one last hope: send her most valiant knight through a portal created by the dark Warlock Gharlan to the "Lands of Shadow" [GM's Note: I hate this title, but I'm leaving it in for now.]

The knight's name was Lady Zerlina, and along with three-thousand souls, a mixture of warriors and refugees, they filed through the Warlock's Portal two by two to a new land.  On the other side they found themselves by a murky lake, the surrounding territory inhabited by a small people they dubbed "halflings."  The few halflings that lived in the territory along the lake joined with the humans and created a small fortified town that the Tannri called "Zerlina's Rest".  A temple to the Tannri's chief deity Ogmios was constructed, and the priest and clerics began their mission to proselytize for their god.

In the years to come after the Tannri came to this land they waged a war in the thick forests to the east of Zerlina's Rest against the Orcs.  The horrible, brutish humanoids numbered in the thousands, and Lady Zerlina only had a hundred trained soldiers, and several hundred farmers and halfling mercenaries, but due to the enchantments of the Warlock Gharlan, the Tannri won.  Included in the spoils of victory was a massive ruin that the Orcs called home, nestled on bank of a beautiful lake.  When Lady Zerlina captured the ruin, and destroyed the remaining goblins and orcs, an outpost was created within its walls.

The outpost became a village, and soon "Borrowtown" was a bustling place of business between the other major civilizations in the region.  The Elves of Fallingdale and the Ever After came to the Tannri with both gifts and a plea: Jharune, their chief god, was not pleased with the humans spreading the word of Ogmios in lands where the neutral elven deity was long revered.  The dwarves of Grimmgate came with terrible claims that the Tannri's coming to this world was causing horrible effects throughout the land, lengthening "the Fall", and creating a stretch of hills and mountains to the north in less than a day.  Even other humans came to Borrowtown from faraway Icerift, sharing the boons of their raids in exchange for gold and treasure.

Lady Zerlina would eventually pass-on to the afterlife, and the Warlock Gharlan left Borrowtown for the New Mountains in search of portals to another "mirror" to this dark world called "The Brilliance" by the dwarves.  The remaining soldiers and closest followers of Lady Zerlina created the Order of Zerlina, an organization sword to protect the Tannri people and all of their holdings throughout the world.  The people of Borrowtown, now a major city, renamed their new capital Tannryth.

Over three-hundred years later and Tannryth is controlled by the Convocation of Lune, a collection of seventeen Archons who are the richest men and women in the city and surrounding lands.  Since there was a distinct lack of nobility in Tannryth, the wealthy gained the positions of power, first in Zerlina's Rest, and then in the capital once it was constructed.  Each Archon commands his or her own army, and while the Order of Zerlina is bound to defend the peoples and territories from threats unknown, its often the armies of a particular Archon battling another that causes the most strife and peril in the immediate region.

One last point of note would be the existence of "The Awakening Ones".  These chaotic entities dwell in the Brilliance, and are a collection of lost, dead minor gods and demons who have been slowly reawakening ever since the Warlock's Portal brought the Tannri to this realm.  The Rifters to the north sometimes pay homage to these powers and patrons, calling them the "Sleepers".  The Cult of the Awakened, consisting of individuals who call themselves Dreamers, is a growing movement that began in the New Mountains with claims that these powerful beings are now aware, active, and engaging in bringing knowledge back to the Realm.  Once existing only on the fringes of civilization, the Dreamers have operated in Tannryth openly for the last decade.

1 - OSR Across 4 Systems
2 - Before I Write the Setting I Map It!
3 - Creating Your Basic Fantasy RPG Character
4 - Appendix Nintendo
Posted by Living 4 Crits at 6:30 AM