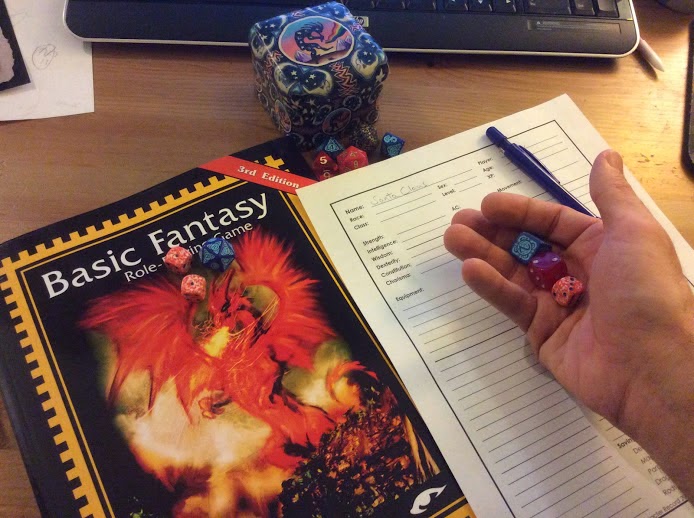 Do you remember back when creating a D&D character meant 3d6's, in order?  You'd grab those three little cubes, and stare at the blank character sheet and wonder, "who is this going to be?"  Would he or she have a high dexterity, a low strength, an average charisma?  That moment just before rolling up a character in old-school D&D and AD&D was always so special, so magical.  You knew that, in just a few moments, you'd have a pretty good idea of who you would play in the next adventure or campaign.

You were about to meet someone special.

This "magic" disappeared towards the end of my AD&D 2nd Edition era, when my Dungeon Master at the time started letting us roll 4d6, drop the lowest, and place them in any order we wanted.  No one in those parties had a decent charisma, and unless you were a cleric, your wisdom was in the tank as well.  3rd Edition was no better, and 4th could be seen as far, far worse in this regards, as point-buy took over for the beauty of "luck."

How pleased I was when I discovered OSR, and how so many game masters, players, and groups still enjoyed games where everyone at the table had a randomly generated character!

In our little "Quattro con Carnage" experiment, we are starting with Basic Fantasy RPG, which means traditional, old-school, 3d6 in order character generation.  But for players used to modern RPG's, those who haven't touched an OSR game before, there can be some challenges after the dice have fallen.

A Question from a Player

I received a message today from one of my players:

"I'm having a weird problem.  There's so little to this character mechanically that coming up with a character has been difficult for me to do.  I don't have the usual touchstones for working on background and personality."

My suggestion was the following:

"You are right, there isn't much to them.  But that means you are free to fill in virtually all of the space that's empty… Look at your stats.  If your intelligence is a 7, why is that so?  Maybe you didn't study as a kid?  Your strength is a 12 because you helped work the family farm.  That mace you carry?  It's an heirloom… Your family has always had a clergy member serving Ogmios… It was passed to you."

While I don't want to assume that the player didn't already think of this to begin with, it does bring attention to a common theme in modern RPG's:  the watering down of ability score importance.

Look at 3rd Edition D&D or Pathfinder.  For many players (I was quite guilty of this) the six ability scores are really just a place to get bonuses for skills and abilities.  When you perform an action, its either coming from a skill check or an attack modifier, where only a portion of the modifier is donated from the core attribute.  On top of this attribute bonus are skill points, feat modifiers, situational bonuses, magic item bonuses, and so on and so forth.  The ability score is buried, and low scores overcome in such ways that it's barely given notice.

Sure, a half-orc barbarian with an 8 charisma is going to be seen as an uncouth brute, compared to the elven bard with a 17 charisma.  However is there really that much of a difference between a pair of characters with scores only separated by a few points, but sharing similar skill point allocation?  I would say that the skill point allocation and feats would end up having a powerful impact on character build, so much so that they create the backstory for PC.

There are a lot of modern games just as guilty of this, including two that we are going to be playing in this 4-in-1 experiment.  Savage Worlds has Edges and Hindrances that build a character's backstory and personality, while the Cypher System has Descriptor and Focus.  By the time the character is finished "mechanically" in these games, the player knows these PC's without ever having to think about it.

Not so in most OSR games.

Take away most of the fluff - skill modifiers and feats, edges, foci, descriptors, perks, and flaws - and ability scores becomes much, much more important.  You could go even deeper and add a little backstory for the character's equipment!  Anything that is left blank… well that's for the player to fill in.

You may have seen on Google+ or Facebook, that my family and I are running a series of special RPG sessions over the holidays that we are calling the Six Short Seasonal Santa Session Spectacular.  During this time, we're going to play six different games, from Savage Worlds to Numenera, but my daughter Carrie has volunteered to run a special Basic Fantasy RPG session called "Santa's Slay" (again, thank you to +Marc Plourde for another great name suggestion!)

In this game, I get to be Santa (that gave me a chuckle), and the rest of my family are going to play different characters from the Rudolph the Red Nosed Reindeer Christmas special.  After thinking about my player's question, I thought I would share my character creation of "Santa", and how I would role-play his ability scores… 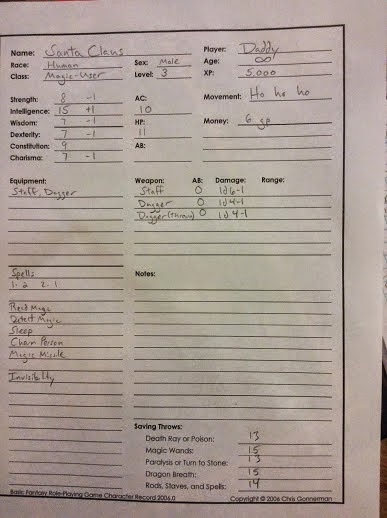 As you can see, I rolled pretty poorly, but at least I got a 15 in Intelligence, which gave me the ability to be a pretty great magic-user!  Santa's brilliant, really sharp and full of all kinds of knowledge, probably because he travels the world each year and gets to spend so much time pondering the wisdom of the universe.  But sitting in a sleigh is pretty sedentary, so his strength has suffered (8).  Being rather overweight has made Santa a bit clumsy (dexterity of 7), and all those cookies have given him a bit of a "sugar dependency."  He's now quite addicted to peanut butter cookies, and that's all he thinks about, which impairs his common sense whenever he's doing anything besides eating cookies (wisdom of 7).  Although he's got a good heart, all those years at the North Pole with the elves means that his patience is worn thin.  His low charisma (7) reflects his inability to deal with people anymore.  At this point, he'd rather just spend time with his reindeer.

For those of you new to OSR gaming, when you look at that sheet and see very little to role-play with, don't forget: that's what makes these games great!  The more white space on the paper, the more room you have to fill with your imagination! 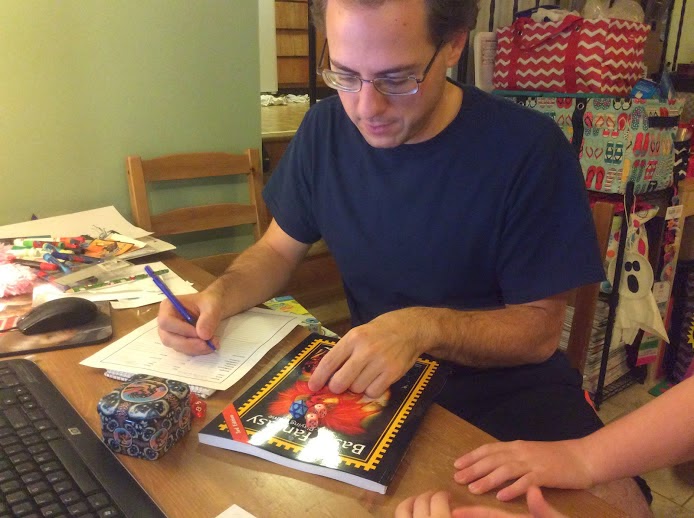 1 - OSR Across 4 Systems
2 - Before I Write the Setting I Map It!
3 - Creating Your Basic Fantasy RPG Character
4 - Appendix Nintendo
5 - Tannryth Campaign Setting - Primer
Posted by Living 4 Crits at 10:53 PM