Converting one of my Favorite Adventures

Say those three words to some of my close friends and gamers from Levittown, Pennsylvania (where I grew up), and you'd here a collection of cheers and groans.  Some loved the adventure.  Some hated it.  But everyone who I ran through Roger Baker's unique and truly inspiring adventure remembered the trip!

Granite Mountain Prison was published in issue #36 of Dungeon Magazine, back in the golden age of AD&D 2nd Edition (1992).  The adventure features a prison rescue, but Granite Mountain is no ordinary jail.  At the center of a large hill, buried within the ground is a massive stone ring.  At the edge of the ring are 365 jail cells, a single door facing outward with a small opening in the ceiling for food and water to be passed to the prisoner.  What was haunting about this prison, however, was that only one prisoner could enter the "wheel" and one leave each day.  There was a single entry point into the wheel, and every day the prisoners would place their feet into an opening in the ground and the entire team of inmates would push the wheel one more "degree" to freedom.  So once you entered this jail, you had at least a year until you could get out.

When I was a kid I thought this was pretty sick!  I was 13 when this adventure arrived in the mail, and I couldn't wait to get my friends to play.  I ran the adventure several times when I was in middle school, and a few in high school.  When I went to college I did quick conversions for Alternity and then D&D 3rd Edition.  Dark Sun, Planescape, Ravenloft, it didn't matter the campaign setting… Granite Mountain Prison was there.  Somewhere.

So fast forward to 2014 and I'm 35.  My group of players for a demo of The Strange - Eschatology Code wanted to keep things going, so I let them customize their characters (or make new ones), and we prepared for another quest.  But to shake things up a bit, I felt like doing a quick conversion of an AD&D 2nd Edition adventure.  There is no reason why many of these classic modules couldn't be used in Ardeyn, or even their own recursions.  I dug through my old adventures and came across my torn and tattered copy of Dungeon #36.

I knew just what adventure I wanted to run…

Some of you may have questions about how hard it is to convert an adventure from another system to the Cypher System.  It's really a piece of cake.  I made the prison guards level 2, the captain of the guard level 3, and the warden level 5.  I threw a pair of summoned Hollow Knights (out of the new and fabulous The Strange Bestiary) in for good measure.  Tossed the whole mountain into the region surrounding Shalmarn.

Veteran Estate agents Jackie Dingo, Arlo Coulton, and Chuck Lannigan were in the Lambsblood Tap, at the center of Shalmarn, having a few drinks with their new partners Babs Goldstein and Agent 97 (aka Carol).  The five agents were trying to track down a fellow Estate member, L.G. Babcock III, who had gone missing several days before.  The team's sources in Shalmarn stated that LGB3, who was tracking the whereabouts of a man known as Tokmal the Master, may have fallen in with the wrong crowd and got "pinched" trying to steal from Lord Sayd Halmak.  As punishment, LGB3 was sentenced to a year at Granite Mountain Prison.

Knowing that L.G. was innocent, the team worked out a plan to spring him from jail.  First they needed to find out the whereabouts.  Arlo volunteered to do something truly terrible so that he could be thrown in the prison, and then Jackie's tracking cypher could be used to follow.  Lord Sayd often took tea at a local shop near the center of town, so Arlo planned to snipe the lord from a distance, and put an arrow in his knee.  Babs and Agent 97 wanted one chance to try to get the Lord to agree to L.G.'s freedom, but when they tried meeting with him, Sayd turned them away.

Arlo took the shot, but accidentally hit Babs instead.  The previously quiet Lord Sayd jumped to action, and sent his guards to investigate while he grabbed Babs and took her out the back door, patching her wounds in the alley.  Arlo was apprehended and began his long march to Granite Mountain Prison while Babs and the rest of the party was offered a fine meal at the Lord's expense within the Keep.

In the keep the party learned of Granite Mountain Prison's true nature, and how only one prisoner could enter and one depart each day.  Jackie, Chuck, Babs, and "Carol" continued to question the Lord and his manservant until suspicion started to grow, and then left the Keep.  Chuck grabbed Jackie's tracking monitor (an auto-mapping piece of parchment) and led the team into the mountains.

Meanwhile, Arlo started the process of getting admitted into the prison.  He was taken inside, and all of his equipment taken (although he hid a pair of cyphers… somewhere).  He was locked in a holding cell, and told that it would not be long until he was placed into the wheel itself.  Arlo tried talking to the other prisoners in the holding cells, and one actually knew of L.G.'s whereabouts.  Mentz the riotous merchant told Arlo that L.G. was only just placed in the wheel, and since it didn't turn until after dinner, there was still a way to get the captive Estate agent free!

Outside the prison the rest of the Estate team just arrived.  There were a pair of guards at the front gate, and Jackie had an idea for a distraction.  The qephilim walked up to the gate and announced that she was a new donut vendor, and she needed access to the prison.  The guards didn't buy her terrible story, but it did give the Stealthy Spinner Chuck Lannigan a chance to sneak up and pilfer the keys to the gate.  Frustrated, Jackie ended up biting the face off of one of the guards, and a quick and dirty battle went down.

The guards were no trouble at all, but before the lead guard fell, he rung a strange bell summoning a pair of Hollow Knights from hidden chambers within the mountain's exterior. Agent 97 was able to keep one pinned down with her great… axe… (see Quotes), while the rest of the team handled the other.  Jackie happened to have an incredibly powerful grenade that would send an enemy to a random recursion, so she tossed it at the other Hollow Knight.

Sherlock Holmes was rather surprised when an inapposite gate appeared in his living room on 221B Baker Street, and was even more surprised when a Hollow Knight appeared.

Meanwhile, Arlo Coulton was having an interesting conversation with the captain-of-the-guard.  When the chat turned sour, the captain declared that Arlo was to switch positions and would be taken into the wheel next, rather than waiting a few days.  Arlo was grabbed by several guards, and guided to the wheel while L.G. Babcock III passed in the other direction.  They each winked at each other, and Arlo head butted the captain-of-the-guard. He missed, so both he and L.G. ended up on the floor getting beaten for several minutes.

Outside the party had finished preparations to infiltrate the prison.  Using her wings cypher Agent 97 scouted the top of the mountain and found a ventilation machine operated by a captive air elemental named Casper.  But this wasn't an interesting enough way to break into the prison, so the team went with Chuck Lannigan's plan: throw handcuffs on Jackie the Qephilim, pretend she was a hulking prisoner, while Babs and Agent 97 donned guard uniforms.  Chuck would stay hidden in shadows the whole time.

Everything was going great, and the "prison guard team" managed to get into the jail, and passed the first guards.  But when everyone met up in the great entrance room to the wheel, things got… strange.

Babs', a retired New York attorney, started shouting at the prison guards that what they were doing was unethical and a violation of prisoner rights.  The captain of the guard asked if Babs was a guard herself, since she had the uniform on.

So the guards all started attacking the rest of the party, although no damage was done.  The guards had clubs and cudgels, but Agent 97 countered with a cypher that negated all bludgeoning damage for a short period of time.  Eventually the warden came out, and Chuck and Babs verbally dueled with the man.  Again, Babs was questioned who she was, and the woman just couldn't keep her cover story.

Finally, before swords were drawn, Jackie grabbed her Kindred Badge (yes, it was on her sheet) and shouted over all the commotion.

"Stop what you're doing right now, you all fail inspection!" Agent Dingo exclaimed.  Jackie explained, with backup from Chuck, Babs, and Agent 97 that she was there to inspect the facility, and that it was not up to par.  She insisted on taking L.G. and Arlo, and incredibly the warden agreed.  The entire team, plus LGB3 walked off into the sunset… the freeze frame coming right after they all started high-fiving. 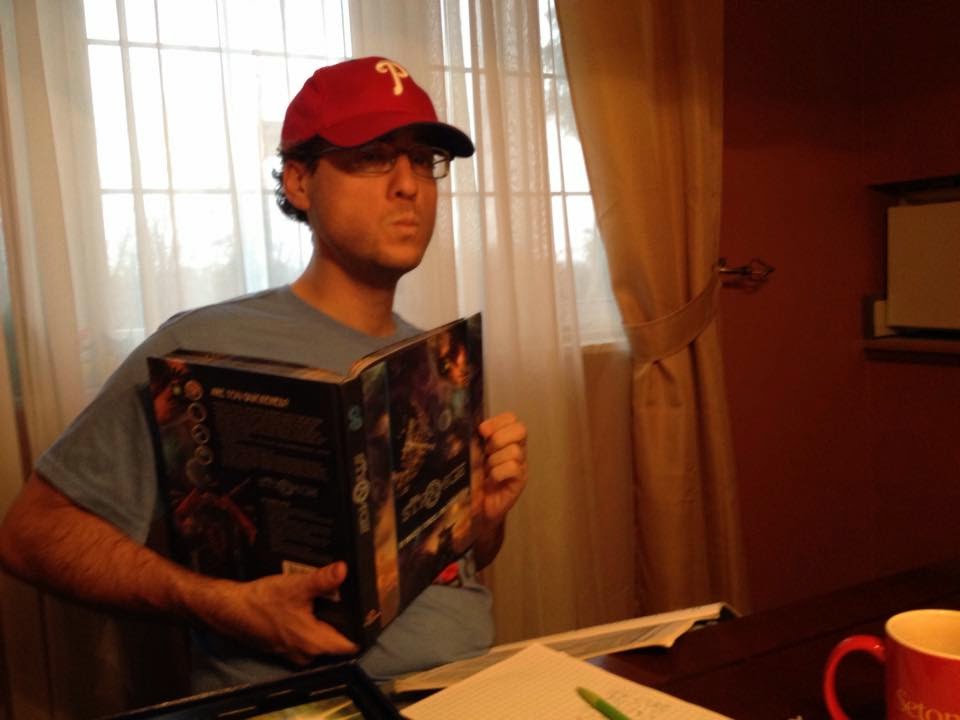 
"He killed my monkey!" - Andy was still raw about Thursday's Numenera game

Jim - "She [Agent 97] has a title to a riding horse, does she have the horse?"
Jeremy, helping with Bobbie's character - "It doesn't say."

Emily introduces her character - "Barbara Goldstein, but everyone calls me 'Babs!'"
Jim - "And your focus is Shepherds the dead?"
Emily - "So I'm basically Theresa Caputo!"

"Is Arlo dancing on the bar, since he's so graceful?" - Bobbie was pretty interested in Jeremy's descriptor

"Get your shit together, Carol!" - Babs screaming at Agent 97.

"So we've all seen Star Wars, and we all have uniforms." - Andy's announcement moments before Jen's Qephilim was put into handcuffs.

"Well I still have my great ass… axe."  - Bobbie, just before putting her head on the table.

Email ThisBlogThis!Share to TwitterShare to FacebookShare to Pinterest
Labels: DND, Dungeons & Dragons, Dungeons and Dragons, The Strange, The Strange RPG