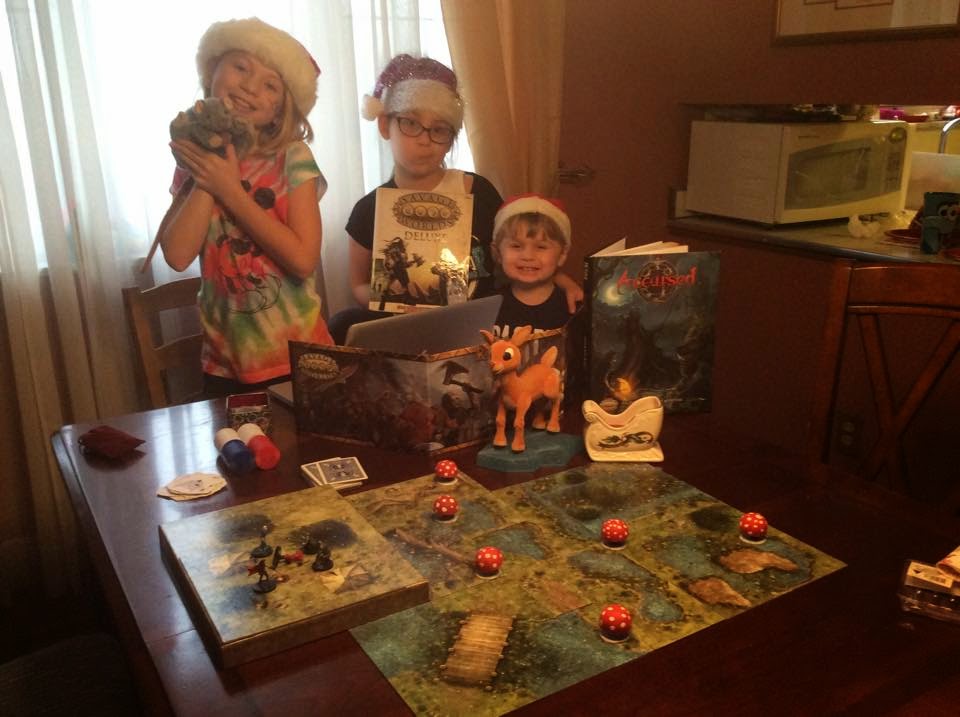 
Happy Continued Hallowthanksmas everyone!  We're getting close to the end of the holiday season, and as you may have noticed from my Thanksgiving posts (AD&D 2E Council of Wyrms and The Strange Thanksgiving Translation Codex Special) in our house, we don't jingle bells, we ROLL DICE!  Yesterday afternoon, I was on Facebook, minding my own business when a few posts came up regarding gaming around the holidays.  I already had four sessions scheduled between my regular games, but I wanted to run something on Christmas day.  Something involving Santa.  Well this idea… snowballed.

I had quite a few adventure ideas that included Santa, from Numenera to Accursed to AD&D 2nd Edition.  They all seemed so awesome, and I was dared to run them all: 12 days of Gaming!

This is the awesomeness that will be known as the  Six Short Seasonal Santa Session Spectacular! 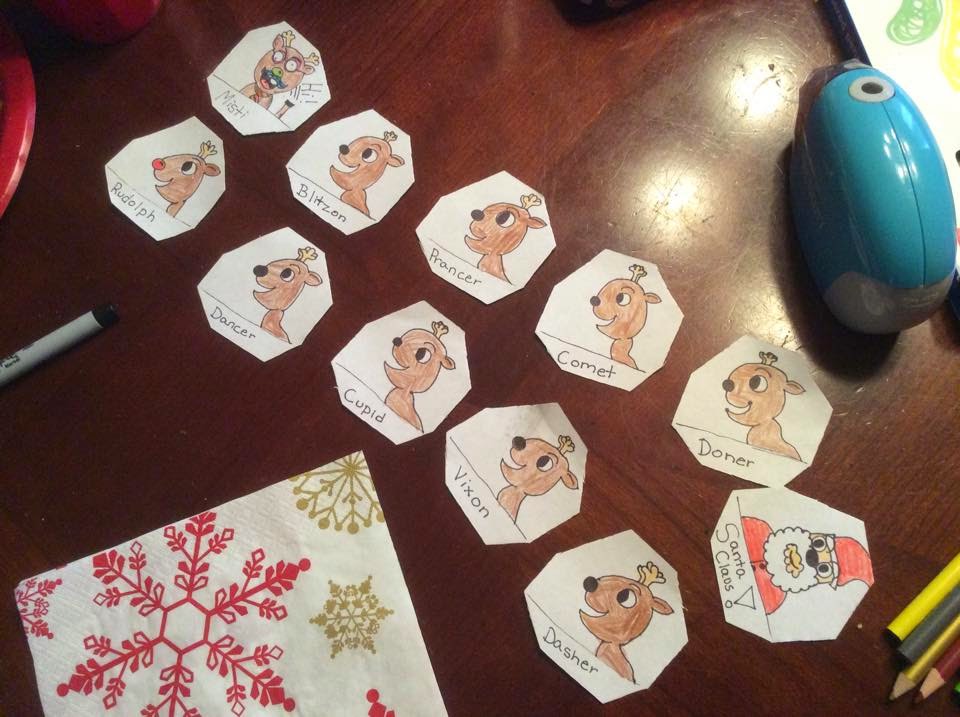 For our first game, we thought that we'd return to the land of Morden and the Avernus family for some Savage Worlds: Accursed.  What better way to feel festive around the holidays than to toss some bennies and chuck those wild dice while dispatching horrific creatures?  But in this dark and foreboding campaign setting, where the players are gothic monsters of myth and legend, what kind of spooky twist can we put on Mr. Claus?

You're about to find out! 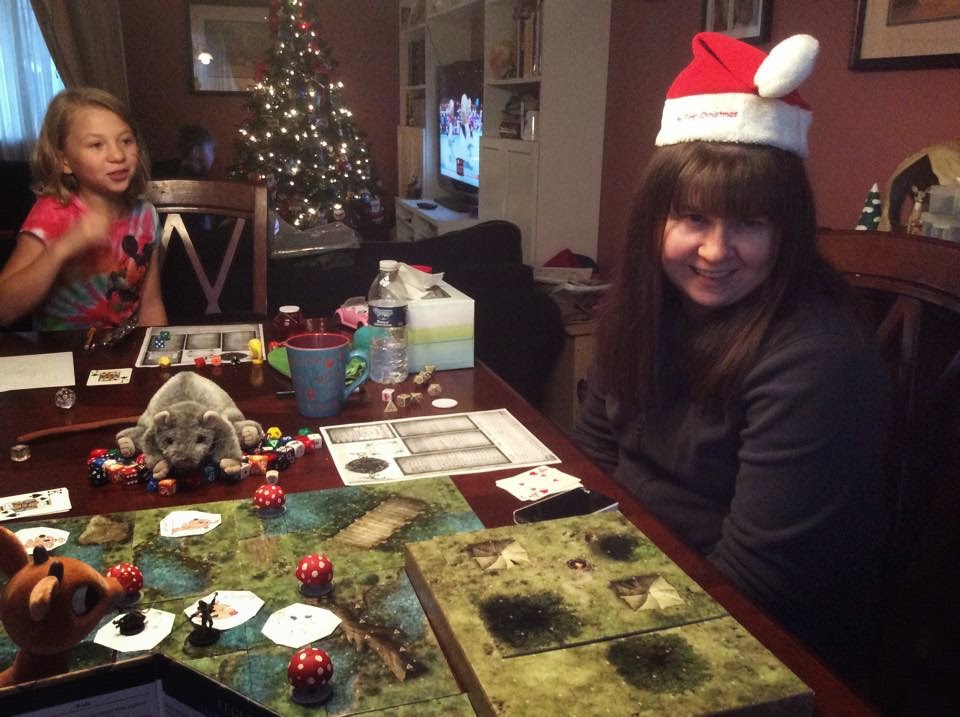 
Just north of the city of Augsing, in the land of Morden, there lives a twisted family of Accursed in an estate called Muridae Manor.  Avarice Avernus and her two children, Annaria and Adelaide, had done well for themselves since returning to their estate following the Bane War.  Upon gaining control of their own lands, and thwarting the plans of the sinister and evil Arachnis the Spider Demon (now their servant), the Avernus family was finally gaining favor with some of the locals.

So when Barth Windence Jr., and his wife Mike (pronounced "Mee-kuh," go watch Eurotrip) had a problem at their family farm, they came straight to Lady Avarice Avernus for assistance.  It was the morning following the Winter Solstice celebrations, and at the edge of the Windence farm, in a particularly nasty swamp, something from the sky crashed.  Neither Mr. or Mrs. Windence knew what this object was, but now there were incredibly fast beasts raiding the edge of their farm, stealing their livestock.

Grabbing their gear, the three Accursed Avernus women (along with their faithful cranium rat Rudolpho) made the trip to the Windence farm, and into the murky swamp.  Just before reaching the fetid pools and muddy pits, the three stumbled across a small makeshift camp, and a very sick and skinny man in a red robe and cape.

"Please help," the man begged.  "Please help.  My pack animals… they are enchanted… I need to get them back."

The man was laying on the ground moaning, veins turned to black and a stomach that seemed to roil like the sea.

"Who are you?" asked Adelaide Avernus.

"Why are you dead? asked Annaria.

Avarice squinted and then remarked, "You look a lot like my dear friend Nick Papageorgio."

Kristif told the women that he was traveling through the sky in his "flying machine" pulled by nine enchanted creatures.  His mission every Winter Solstice was simple:  fly around Morden to the homes of good little boys and girls.  Then he would capture the boys and girls that he felt were suitable, and take them back to his lair.  In his dreaded home he would force the girls and boys to become engineers to work on his machines.  The chosen few would be transformed into… wereindeer… to power his sleigh.

"I have a serious problem with your reindeer acquisition methods," Avarice snapped upon hearing the story.

But Kristif asserted that the wereindeer, now wandering the swamp, had to be returned or they would continue to feast on the local farm animals, and possibly the locals themselves.    Taking a look around, the dhampir scout Annaria spotted one of the fell creatures in the swamps below.  Her incredible vampiric eyesight even let her read the name on the collar, despite the dark clouds screening the sunlight:  Prancer.  The wereindeer was chewing on the flesh of a still living, but mortally wounded horse. 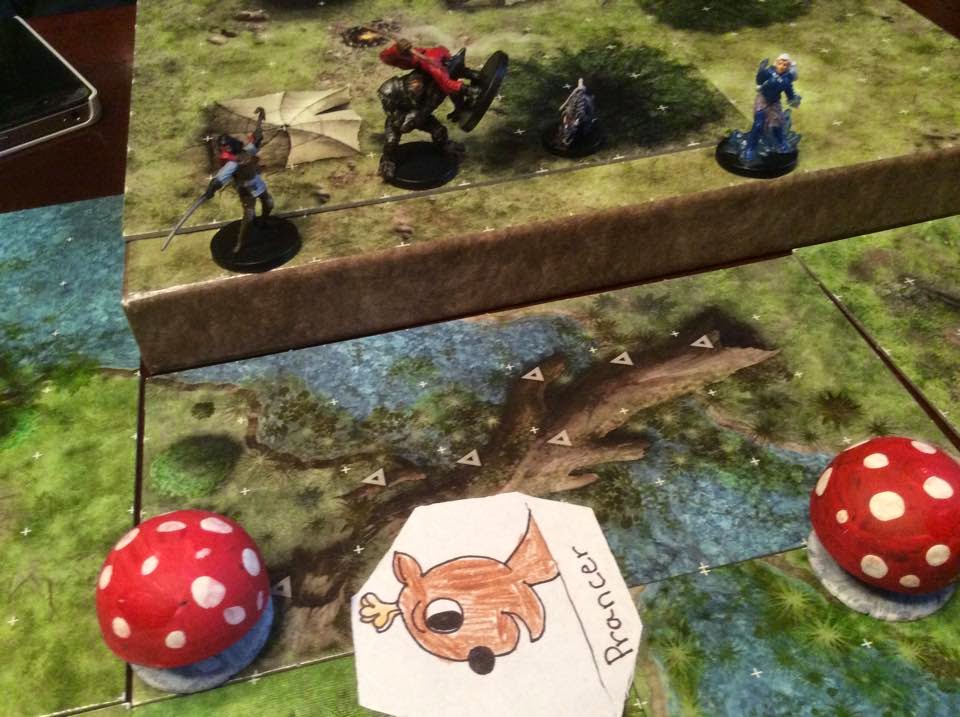 The Avernus women wanted to take Kristif with them to investigate the wereindeer, but the man just rolled on the ground complaining about his stomach.  From the looks of it, the man's belly was starting to jiggle like a bowl full of maggots.  Annaria insisted that she could take the beast down herself, so the dhampir unslung her musket and crept towards Prancer, careful to stay out of sight and not make a sound.

With a single shot the scout ended the wereindeer's twisted existence.

While she reloaded her musket, Annaria felt Rudolpho leap off of her shoulder watched as he scurried up to the dead wereindeer.  Even though he was quite civilized around most folks, the cranium rat had a sincere interest in opening this beast's skull.

"I want to see inside his brain," announced the rat.

Annaria soon realized that firing her musket may not have been the best course of action, as she soon spotted eight more massive wereindeer in the area.  Dasher, Dancer, Vixen, Comet, Cupid, Donner, Blitzen… and Rudolph.  The gunshot got their attention, but her amazing vampiric reflexes still kept Annaria out of their fields of vision.

Kristif insisted that he needed to get to his sleigh, and that if the party could capture just one of the wereindeer, he could take off and leave the swamp.  This of course wouldn't help the situation with the other seven wereindeer, but it was a start.  The man's belly was now so swollen that it started to split open, and dark fur was coming out of the sickeningly torn wound.

"What are you!" Adelaide demanded to know.

"I'm Kristif Kringle!" the man moaned, as if this would answer her question.

Soon the man's leg started splitting open, and Avarice decided it was time to get the creepy man to his flying machine before his bloating became worse.  The mummy hefted the man's weight onto her back and followed Adelaide, who blazed a trail around the swamp's edge.  Annaria used sign language to tell her sister and mother that she was going to try and speak with Rudolph, as his shining red nose interested her.

Adelaide and Avarice didn't make it very far before the heavy mummy mommy stepped on some branches and alerted the fierce eyes of three more wereindeer.  Adelaide started preparing her white magic spells while Avarice dropped the swollen and now splitting man to the ground.  It was time to do battle.

On the other side of the swamp, an inquisitive but good natured little dhampir was noticing that Rudolph the red nosed wereindeer was not a happy fellow.  Unlike the other wereindeer who seemed to be completely transformed into hulking reindeer with full antlers, Rudolph was like a weird man-reindeer mutant.  His hooves had fingers and his red nose was that of a human.  But Annaria's innocent manner helped sooth the lycanthropic man-beast.

"Please help me," Rudolph begged.  "I don't want to be like this anymore!"

Rudolph promised Annaria that if she killed the evil mad scientist Kristif, the curse would be broken.  When Annaria told the very reasonable wereindeer that his "friends" were not being so nice, Rudolph stated that the correct magic could sooth their souls.  Annaria then remembered that one of Adelaide's newest spells could help calm beasts!

"My sister can help you!  But right now she and my mom are in battle with Cupid, Blitzen, and Vixen!" Annaria shouted excitedly.

Rudolph asked Annaria to drag him to his fellow wereindeer, but whispered in her ear to beware.

Meanwhile Adelaide and Avarice were wrapping up their battle with the three wereindeer at the edge of the swamp.  Rudolpho (the rat) had one pinned down and was continuing to gnaw on his flesh.  Annaria managed to stun one with her witchcraft, and slung a stunning spell at another making it easier for her mother to land some hits.  After a few moments, the three beasts were down.  Two were dead, and the last unconscious.  By the time Annaria arrived with Rudolph everything seemed pretty simple.  Rudolph announced to his fellow lycanthropes that the Avernus family meant no harm, and Adelaide's spell helped cool the nerves of the wereindeer left alive.

That's when the War Pig rose up!

Kristif Kringle had completed his transformation into a full sized were-boar!  Immediately Adelaide, Annaria, and Avarice fled in terror, running away as far as they could before turning to get a better look at the monster.  It was ten feet high at the shoulder, and fifteen feet long.  In its mouth were two massive tusks, and its breath smelled of disease.

"Ho… HO… HO!"  roared the horrific creature.  It charged forth and rammed its two tusks into Adelaide.  It took everything she had for the little shade to keep it together. 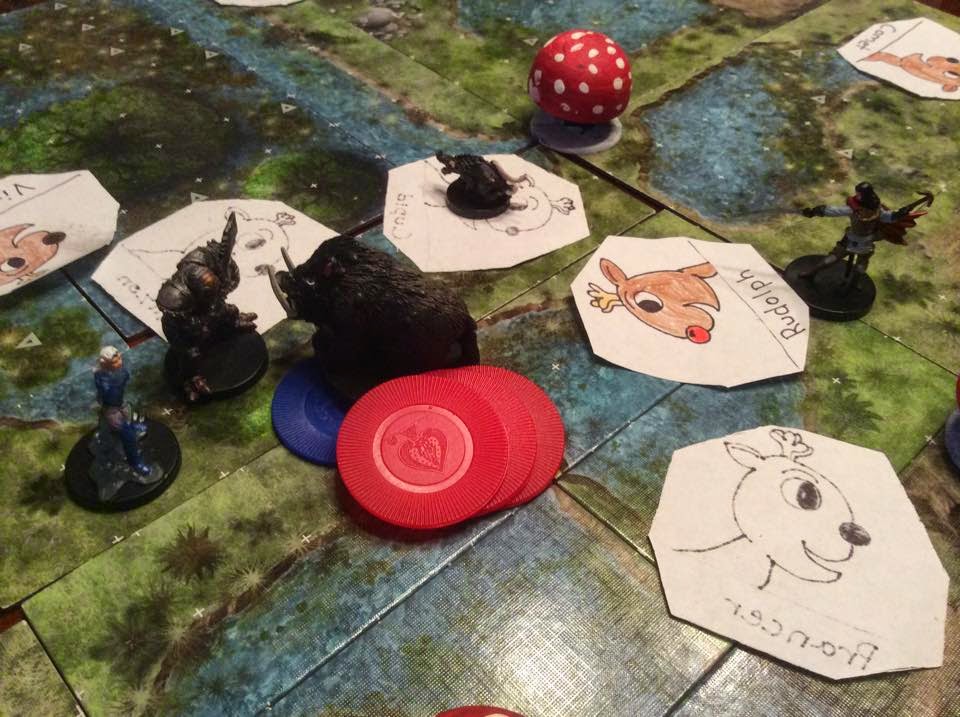 But once Adelaide regained her wits, she pulled a few components from her belt pouch and cast a new spell.  Immediately the wereboar was stunned, and found itself unable to move more than few inches.  Annaria then aimed her crossbow and delivered a terrific shot straight to the beast's right eye.

Blinded and in terrible pain the wereboar reared back again and prepared for a second charge on Adelaide when he fell to the ground dead.  Kristif didn't even hear the gunshot from Annaria's musket.

The battle was over.  As Kristif Kringle melted into the swamp, the remaining six wereindeer slowly transformed into children.  After covering them in clothing found in Kringle's sleigh, the Avernus family led the little children back to the Windence farm.  The Windences had no children, and were happy to take these six terrified children into their warm and loving home. 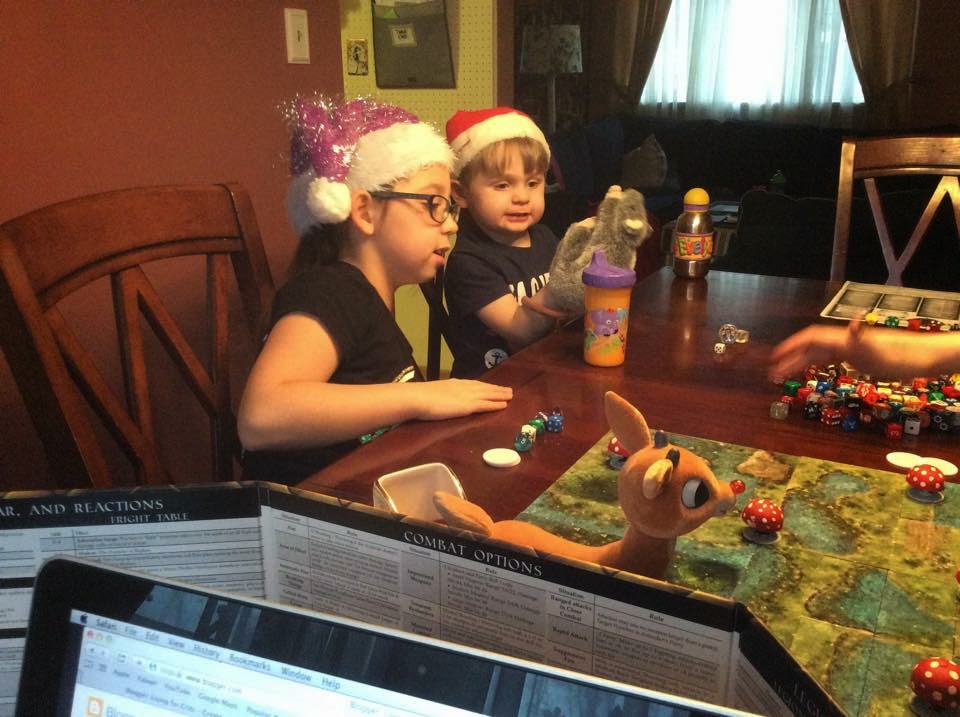 Carrie:  "It was fun, but insanely creepy, horror-like, and very demented… It's kind of creepy that Cooper decided to eat two reindeers." 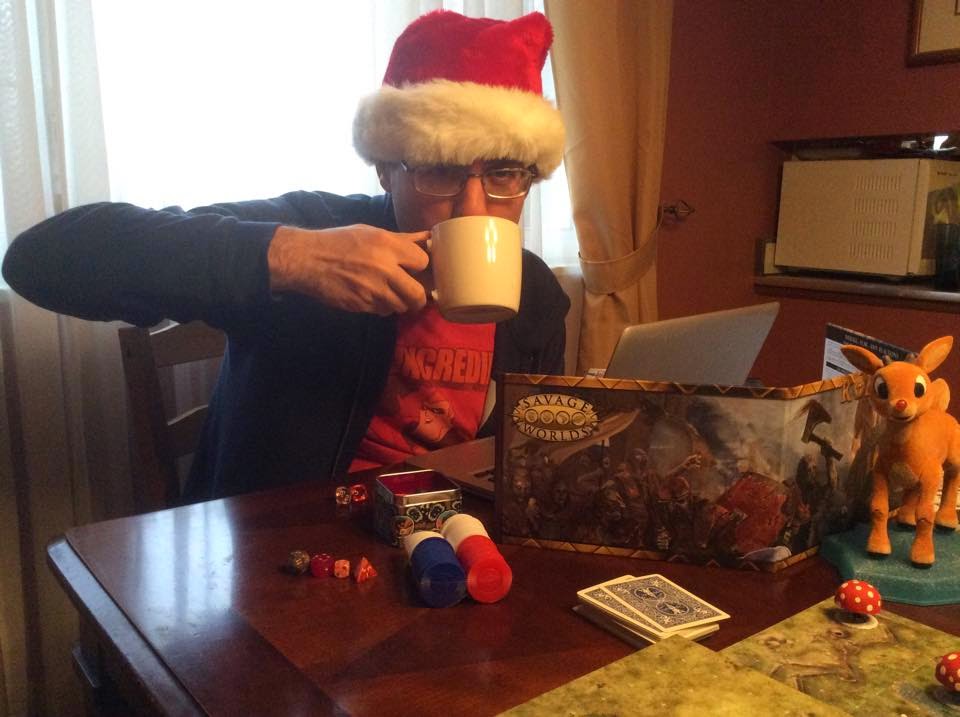 Did this adventure leave you craving more #SantaGaming action?  Well have no fear!  We have five more Santa games scheduled this holiday season, and although this may have been our most terrifying and horrific, there is definitely a lot of weird and wild planned! 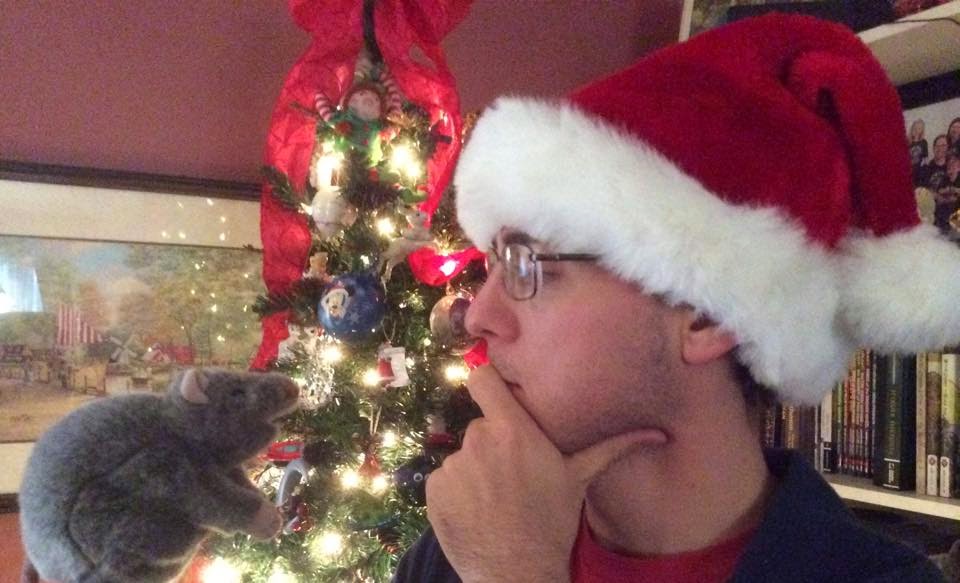