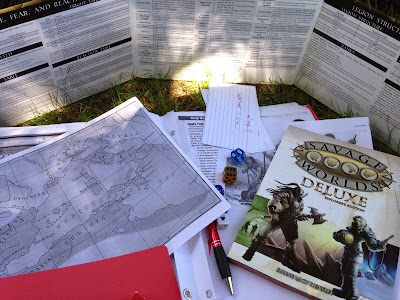 On Memorial Day we kicked off our #GetOutAndGame 2015 season at a local park here in Western Pennsylvania: Bushy Run State Park.  It was the perfect day!  The sky was blue, there was a light breeze, and the temperature was right around eighty degrees.  After exploring the trails and fields, the kiddos picked out a perfect "picnic" spot with plenty of shade.  But we weren't at Bushy Run State Park to eat…

… we were there to game!

If you haven't heard about #GetOutAndGame yet, it's a little tradition that we began early in 2014.  To celebrate this season we recently filmed a special edition of Living 4 Crits:

As I mention in the video, for our first #GetOutAndGame I wanted to play Savage Worlds: Weird Wars Rome.  In a previous blog post I discussed all of the reasons that you should try this fun, yet horrifically twisted historical RPG setting.  Unfortunately I haven't had a chance to return to Ancient Rome since last year.  Since my good friend and fellow savage Melinda (along with her son Tristan) was going to be joining in this #GetOutAndGame adventure, I thought it would be the perfect time to dive back into Weird Wars Rome.  About a year ago I ran a mini-campaign set during Caesar's Gallic Wars, and Melinda was one of my players.

I wrote Hannibal's Wake way back in 2013 when Weird Wars Rome had just finished its Kickstarter.  Rather than focusing on a unit of Roman Legionaries, the players in Hannibal's Wake are Celtic tribespeople trying to deal with the ordeal of the Carthaginian passage through the Alps.  The adventure involves the hypothetical cannibalism that some of the Carthaginian generals feared would be required to sustain such a large force passing through the Alps.

Hannibal's Wake was greatly inspired by Dan Carlin's "Hardcore History" podcast series: Punic Nightmare.  I can't urge you enough to take a listen!  It'll be the best $4.99 you spend in a long, long time! 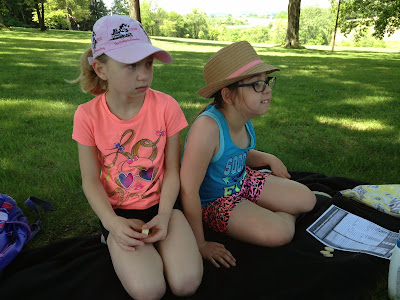 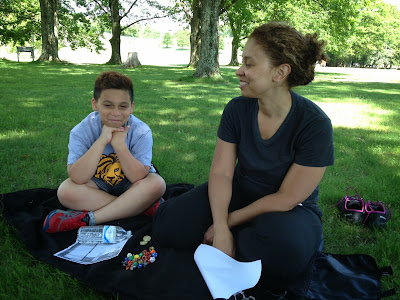 Eppilla, Viridovix, Duratios, and Gutuater looked on in horror as their captors prepared a large bonfire in the middle of a guarded camp.  The four Celts, members of a scouting party sent by the Ceutrones tribe, were trapped in small wooden cages bound by leather straps. Before setting out on their reconnaissance, village whispers spoke of starving Carthaginian mercenaries taking part in cannibalism.  The sizes of the spits being erected by the Carthaginians mercenaries made the scouts believe the stories.

Gutuater believed these specific mercenaries to be Iberian in origin, with a similar Celtic language to her own people.  As she listened in on the guards’ conversation, she came to the conclusion that dinner would certainly include at least one of the captives.  There was some fear in the voices of the guards, however, and they shared rumors of their own.  A similar troupe of mercenaries had eaten human flesh two nights earlier, with terrible consequences.  Anyone who had taken part in the ghastly feast found themselves transformed into a walking nightmare.

It was still early in the afternoon, and most of the camp’s soldiers were in the forests looking for food.  Only twelve guards remained, two of which were tasked with watching over the four prisoners.  Not wanting to wait around and become dinner, Eppilla was the first to escape her bonds.  A Child of Teutates, the young Celt was blessed with a unique ability to shapechange into small animals.  In an instant her fellow party members saw Eppilla blink out of sight, and reappear as a small, brown rabbit.  The rabbit scampered off and waited by a nearby wooden fence.

Gutuater quickly realized that she and her other companions lacked similar godly blessings and that subterfuge would be necessary to perform an escape.  Luckily the Gallic Scout had a sling tucked into her boot for just this sort of emergency.  Digging up three large rocks, Gutuater placed one in her sling, lifter her arm out of the cage.  She lobbed a stone against a wooden fence fifty feet away.  The loud thud got the attention of the two guards, who grabbed their spears and moved away to investigate.  Taking the opportunity to escape, Gutuater unraveled her leather bonds, and instructed Viridovix and Duratios to do the same.  The Gallic Scout and Druid both crawled out of their cages, and were nearly to the fence when they realized that Duratios was not about to flee without a fight.

A massive figure, clad in a heavy cloak of animal pelts, Duratios was a Wolf-Blood Warrior, and would never flee from the opportunity for an honorable battle.  Instead of untying the bonds, Duratios simply stood up in his cage, shattering wood and bone, ripping leather and rope.  With a mighty roar, the Wolf-Blood Warrior charged a guard nearly thirty feet away, with only his fists as weapons.

That was all he would need.

A single punch from Duratios’ calloused fist left the Iberian guard dazed, while a second broke his skull.  Three more guards charged forward, as well as the two whose job it was to watch over the captives.  Gutuater took another sling stone and lobbed it at a guard, dropping him.  Not wanting to leave all of the fun to the berserker, the druid Viridovix produced a hidden antler blade and joined Duratios’ side.

The guards were confident at first.  One grinned as he prepared to strike the unarmed Duratios.  “You have nothing!” the guard mocked, as he thrust his long spear point towards Duratios’ abdomen.  But the attack missed!  The guard’s target quickly parried the spear away.  Before the guard could retract his spear the Wolf-Blood Warrior yanked it away in a surprising reversal.

“I have your spear!” Duratios smiled.  Then, with a cold, maniacal laugh, the Wolf-Blood Warrior charged forward, skewering his opponent in a single strike.

Eppilla didn’t want to be left out of the fray.  Despite her timid appearance, the young Celtic girl was still capable of defending her friends.  While still in rabbit form she jumped onto one of the nearby guards’ head, and quickly shapeshifted back to a human.  The weight of Eppilla pushing down on the helmet collapsed the brim, blinding her target.

Gutuater continued to pepper the guards with stones, knocking another to the ground dead, while commanding her scouts to retreat to the fence.  The group moved with their Gallic Scout, until they reached the fence.  By this point the original six guards were dispatched, but another six on the opposite side of the encampment had taken notice to the escape. Gutuater was the first up the fence, aided by a nearby tree branch.  One by one the scout helped her fellow Celts over the fence.

Hopefully the scouting party could reach their village before any of Carthage’s forces arrived looking for dinner. 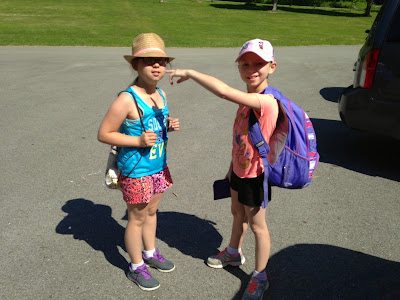 We had a lot of extra pictures following our game, so I thought I'd share them with my readers!  The best part about #GetOutAndGame is that so many memories are created outside of the game itself… it just becomes a perfect adventure!