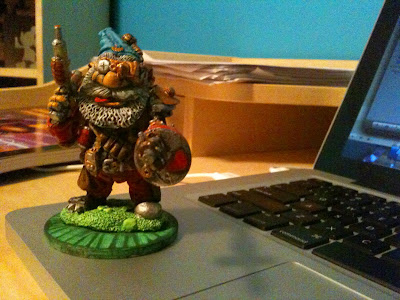 The Game Master's Roundtable of Doom is back!

Hats off to the awesome +Marc Plourde for this month’s question:

There are many different skills that come together to make up a GM.  The ability to think on the fly, knowledge of the rules, plotting, etc.  What skill do you think is your weakest?  What have you done to try and improve that skill?  What advice do you have to offer others trying to improve that skill set?

I realize that character death was covered in last month’s GM Roundtable, and while I missed that discussion, I assure you that I’m not trying to play catchup with this post.  The ability to properly dispatch a character from a serious campaign can be a true and tangible skill.  Sure there are those lighter, deadlier games like Dungeon Crawl Classics RPG, where character death is often fast and fun.  But in the two systems that I have played the most over the last four years, (Cypher System and Savage Worlds), I cannot recall one significant character death.  In the Dungeons & Dragons 4th Edition campaign I ran for the three years prior I didn’t have a character death either.  Perhaps I could’ve slain one or two if I really wanted to, but in all honesty I can no longer stand putting players through the trouble for fear of breaking a campaign.

Unfortunately I’ve developed a bit of an anxiety over inflicting character death within an established group.  I’ve lost my ability to judge whether I should pull a punch or let the dice fall where they may, and therefore have almost removed the concept of character death from my regular campaigns completely.  Now that I’m in the confessional, I might as well admit that I can point to the very moment and campaign when I started to lose my touch as a slayer of characters…

… there was a dark time.

When I was in college I used to pride myself for being a brutal game master.  I enjoyed being called “Character Killer”, and my players knew to steer clear of my wrath whenever that look of bloodlust filled my eyes.  When I finally got around to reading Knights of the Dinner Table I laughed about the similarities between those GM caricatures and my own style as judge and referee.  I gloated over the character deaths “inflicted” on my players, through a “Campaign Crematorium” that I shared on my old Geocities website.

Here are a few of my favorite entries from my glory days, written between 1999 and 2002:


To this day I don’t know why I had such an infatuation with ending the lives of adventurers.  It wasn’t that I was going for a TPK, or “total party kill,” rather I would ratchet up the difficulty and press for a character death whenever I though the story was getting dull or boring.  It was an easy and perhaps lazy way to introduce drama and emotion into the storyline.  But later on in my career I came to the realization that the emotion was anger, not sadness.  The players who had to go back to the drawing board and draft another character from scratch were sometimes furious with my rule callings and I frankly, as a more mature GM looking back, I agree with those players.

It took a character’s death bringing down an entire campaign for me to start changing my views.

Back in 2002 I was running an Alternity campaign called “Ether Moon”.  It was a home-brewed cyberpunk setting that included some magic and fantasy races.  Take Shadowrun, but put it in a Final Fantasy VIII inspired universe and you’d have Ether Moon.  We had a pretty good campaign going, with three regular players, and we were close to introducing a few more.  My friend Jamie was playing a very eccentric spy named “Tavi”, who was the heart and soul of the group.  Jamie’s humor kept the game light and jovial, and his character was the same in the setting.  My initial goal for Ether Moon was to have more of “Blade Runner” tone.  Dark and foreboding, I wanted the characters to live on the edge of danger at all times.  But Tavi’s character reminded me of a “Jack Burton” from “Big Trouble in Little China” – always the center of attention, but maybe not for the right reasons.  He wasn’t the strongest or the toughest, but he sure could talk!

Imagine watching “Big Trouble in Little China” without Jack Burton.  That’s what it was like after I let Tavi die.

It didn’t have to happen, and it wasn’t even a pivotal scene. The party was engaged with a bunch of ruffians in a parking lot just outside of a hotel when a stray shot took Tavi down.  I could’ve flubbed the die-roll, especially since I had the GM’s screen up.  But I didn’t.  Jamie didn’t get upset, in fact he came up with another character quickly, but this one was much more effective at combat at the expense of fun and entertaining social skills.

The Ether Moon campaign only lasted another couple of sessions before I put it to rest.


The Road to Zero Kills

Tavi’s death wasn’t my last kill, but he was the first to get me thinking about the effect a character’s death can have on a campaign.  Our group experienced its fair share of character deaths between 2004 and 2007 when I ran a pretty bloody Dark Sun campaign.  But when I killed my cousin-in-law Sean’s favorite gnome bard, I realized my days as a “character killer” were over.

After wrapping up Dark Sun in 2007, I kicked off a very successful D&D 3.5 Eberron campaign that featured everyone’s favorite sidekick, Rhoody.  Much like Tavi, he was the life of the party, and provided most of the comic relief for a party of min-maxed monster slayers.  That was the other side-effect of running incredibly brutal campaigns: I taught some of my players the worst possible lessons.  After experiencing an… above average… level of character death in Dark Sun, our opening party for Eberron resembled a team of elite, overpowered Navy SEALS.

All except for Rhoondar Blaine, of course!


I know I’m not the first GM to ruin a campaign with the Deck of Many Things, but that event was the tipping point.

When Rhoody died, so did our Eberron campaign and my time with Dungeons & Dragons 3.5.  Sean’s character was so integral to the party makeup that adventuring without him just didn’t feel right, and I scrapped the game in favor of something new and shiny… 4th Edition.

Goodbye to the Grim Reaper

I didn’t kill any characters in Dungeons & Dragons 4th Edition.  Yeah, yeah, I know what some of you 4E haters are going to say, and I’ll even agree…  to a point.  In D&D 4th Edition it was really hard for a player character to die…

.. but believe me, if anyone could’ve pulled it off it would’ve been me.

This same tendency to shy away from character death carried with me through Savage Worlds and into the Cypher System.  When I would see a character getting close to death’s door I would think about the following following:


Not knowing the answer to these questions, and being the insecure GM that I am, when faced with this challenge (when not running Dungeon Crawl Classics RPG), I typically pull a punch or create some kind of deus ex machina to save the day.  This is not a good habit, and I probably need to start introducing more risk into my regular campaigns of Numenera and The Strange.

Returning to the Crematorium

If I do reopen the Character Crematorium for business I plan on following these rules:


I may actually get a chance to try out a higher-lethality campaign in Numenera, giving me the opportunity to test my methods of dealing out character death in the Cypher System.  Earlier this week I decided to hack my classic’ish Ravenloft module into the Ninth World of Numenera. I use “ish” because it’s not the original, rather the 2nd Ed. Reprint, but still pretty awesome.  The players in my weekly Numenera group have just reached 4th Tier, and I’ve been pretty easy going so far when it comes to risk, for all of the reasons mentioned earlier.  But now that we’re nearing the end of the campaign, I feel comfortable embracing some of my old tendencies.  Stay tuned!

Maybe my old dice have a few more kills left…

What is the Game Master’s Roundtable of Doom?

The Game Master’s Roundtable of Doom is a meeting of the minds of tabletop RPG bloggers and GMs.  Every GM has his or her favorite system, but in these articles we endeavor to transcend a particular system or game and discuss topics that are relevant to GMs and players of all roleplaying games.

If you are a blogger, and you’d like to participate in the Game Master’s Roundtable of Doom, send an email to +Lex Starwalker  at gamemastersjourney@gmail.com and supply the URL of your blog.