First let me apologize for being late at getting this blog entry posted.  As I mentioned in the first Zero to Sixty post, part of my process in learning Fantasy Flight Games' Star Wars: Edge of the Empire role-playing game was to get a little experience as a player.  Learning the basics under the tutelage of a good game master would be worthwhile, especially since I've never played this system.  Thanks to my good friend +Marc Plourde, I had the opportunity on Tuesday night to play Age of Rebellion.  Like Edge of the Empire, Age of Rebellion is designed by Fantasy Flight Games and shares the same rules and system.  But while Edge of the Empire focuses on the Galaxy's seedy underbelly and wild fringes, Age of Rebellion follows the epic struggle between the Empire and the Rebel Alliance.

Let me get this out of the way now: I loved playing this game!

Good thing too!  I have a terrible habit of purchasing gaming materials before trying them out.  Occasionally I pick up a game and a few sourcebooks only to find out that its not for me.  This happened with Shadowrun back in 2012.  I was supercharged on the Shadowrun Returns Kickstarter, so I went and picked up the 20th Anniversary Edition of the Shadowrun RPG.  I loved the backstory, and the concepts, but couldn't wrap my head around the mechanics.  It didn't help that I had just picked up Savage Worlds.  In one hand I had a streamlined, fast playing, and action packed game.  In the other was a very crunchy, "rule for everything" RPG.  After only a couple weeks with the books I shipped them back to Amazon and ate the shipping costs.

My experience with Edge of the Empire has been the exact opposite!

Although it was not my plan to do a full review of the system, I do want to share some insight on my favorite aspect of the game so far.


My favorite part of Tuesday's game was also my biggest perceived turnoff from before I considered purchasing Edge of the Empire.  Why would I want to learn a new game that forced me to purchase weird dice?  Granted, Dungeon Crawl Classics has its fair share of weird dice, with all those d5's, d7's, and so on… but these Edge of the Empire dice didn't even have numbers!  After giving the dice a try, I found that not only was the system easy to pick up and learn, but it became very intuitive as the game progressed.

True to their narrative concept, the dice "told a story" with each roll.  In most RPG systems you have your successes and failures.  Some games, like Alternity and Savage Worlds give you varying levels of success.  But each die roll in Fantasy Flight Games' Star Wars system has TEN possible outcomes, not even fully counting the severity of the success or failure:


What is a "Success with Despair"?  Roll enough successes but get stuck with a Despair showing and perhaps your Scoundrel hit the Stormtrooper with a blaster pistol, but left herself open and exposed to a hidden enemy that was previously out of sight.  A Failure with an Advantage could mean that while a light saber missed the Sith Lord, it sliced a large pipe, filling the room with steam that blinds all enemies.  The options are endless!  As we played I found myself as a player coming up with interesting "stories" with each die roll. 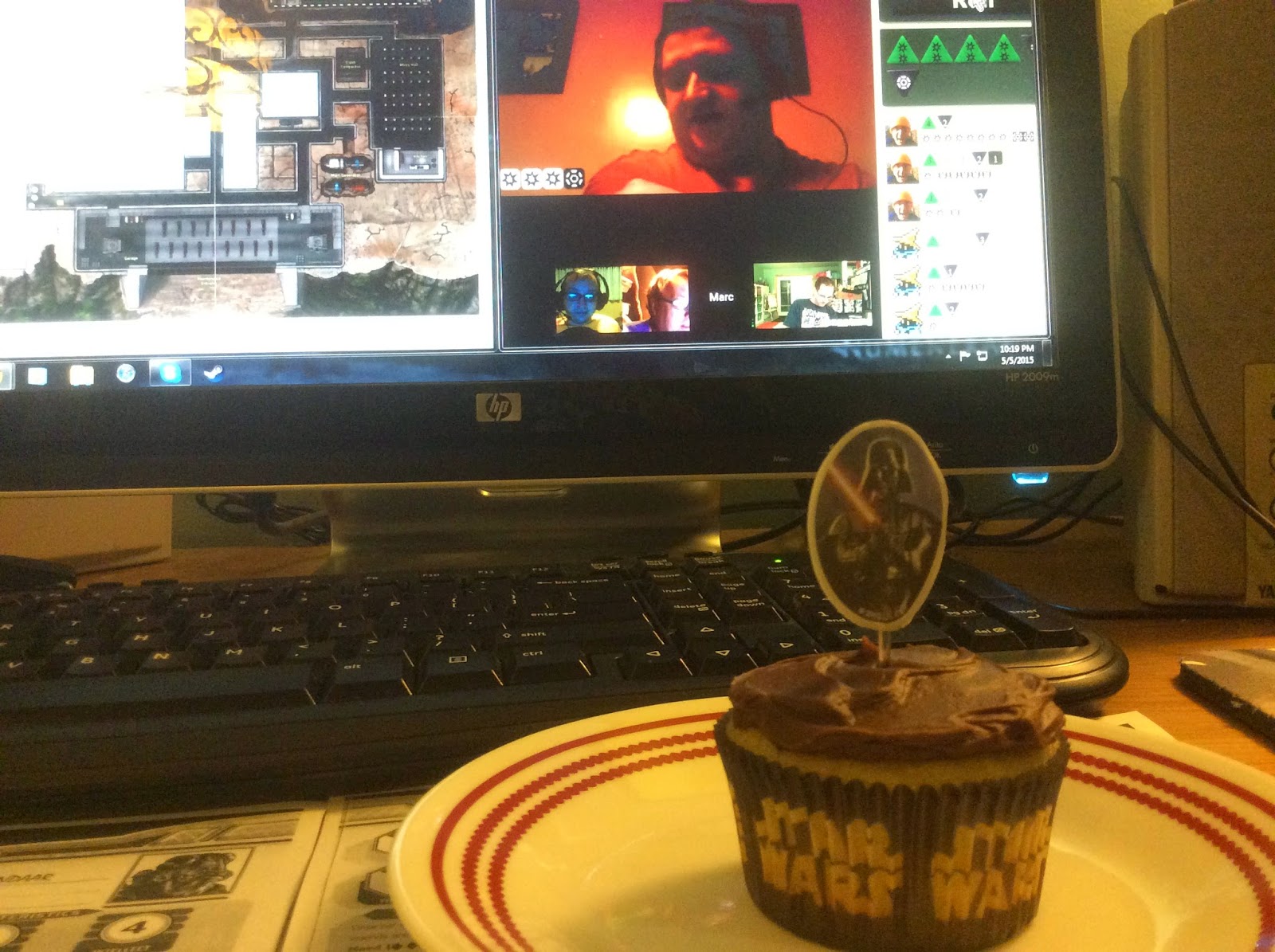 Marc ran our characters through an introductory adventure that can be found in the Age of Rebellion Beginner Game - Takeover at Whisper Base.  Tendaar, my Mon Calamari Engineer, was accompanied by Vendri (+Craig McCullough's Duros Spy), and Cael (+andrew lyon's Human Soldier).  The adventure that Marc put before us seemed pretty daunting!  Not only were our three characters supposed to sneak into the base and disable an Imperial Shuttle, we also had to clear out all of the stormtroopers and guards…

We had a pretty eventful evening…

Along with the narrative dice, I found that the Destiny Pool really made the game interesting, especially during the epic final conflict with a stormtrooper squad.  I could hear John Williams' "Duel of Fates" playing in my head as we went head to head with the armor-clad commandos.  As players, we continuously called upon the Destiny Pool to bolster our efforts, while the forces of darkness did the same, with Marc turning the tables on us whenever possible through the power of the dark side!  Flipping the tokens each round reminded me of playing "speed chess", and I could see how the action would play out even more cinematically at a real table.  Alas, we were playing through Google hangouts.

It's also important to note how fast the combat scenes played out.  We had five encounters during a two and a half hour long game, and each felt quick and dangerous.  Although my Mon Calamari Engineer lucked out, our Human Soldier as close to getting knocked out several times in the evening.

It looks like I'll get the opportunity to try GM'ing Edge of the Empire right on schedule with my Zero to Sixty plan.  Tomorrow night I'll be running the introductory adventure out of the Star Wars: Edge of the Empire Beginner Game.  I can only hope that I do as good a job teaching this game as +Marc Plourde did for Tuesday's crew!