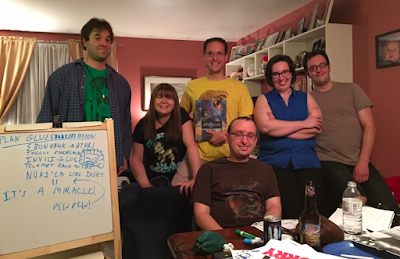 Mutated cereal treats, KFC buckets labeled "Zoidberg", a planning whiteboard, and a game master with a nasty hamstring injury.  Last night's game had everything, and rightly so, as we were celebrating two special events: the last session of our "Under Strange Suns" adventure, and Emily moving away to Ohio…

… wait, that last one sucks!

Actually its pretty great for Emily, as she's going to have an incredible new job, but for the rest of our little group, we'll be a bit sad.  We hope to keep our monthly team together by letting Emily Skype in, but with her departure slated for August, the clock is ticking.  So last night we went out with a bang…

… or should I say "GlueShankSplosion?" 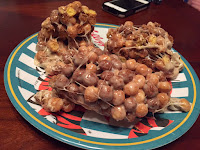 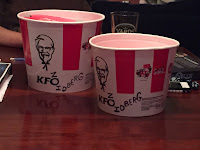 Agents of the Estate

Five brave agents of The Estate, having just witnessed the horror of Sherlock Holmes' murder, now stood face to face with the legendary assassin droid HK-47 and his six metal minions.  HK-47 leveled his heavy blaster rifle at Dr. Sybil and squeezed the trigger but missed.  The Lucky Paradox and Ace Pilot was a nimble woman, not about to lose her life on some video game recursion.  In a fit of rage, Babs let go of her beloved Benedict Cumberbatch version of Sherlock Holmes' hand and charged HK-47.  But instead of striking the droid, the Strange Paradox tumbled to the side, and deftly plugged a cord from her datapad into its side.  HK-47 didn't notice at first, but quickly realized that his assailant was trying to slice his programming!  While the assassin droid struggled to pull the connection, four of his droid cohorts started peppering Babs with blaster fire.  Struck three times, the Paradox fell backwards into the garden, but still clung to her datapad.

The other two assassin droids also engaged the Estate agents, lobbing a pair of nauseating grenades at Arlo, Jackie, and Chuck.  The fumes were disgusting, reeking of old wet trash, but not debilitating enough to stop the trio from springing into action.  Chuck grabbed his force projection cypher and threw a twenty foot screen in front of the team.  Jackie Dingo, a Wookie on Dantooine, grabbed her partner Arlo Coulton and threw him a dozen feet into the air.  Landing atop a nearby wall, Arlo moved just past the force screen and readied his sniper blaster rifle.

While HK-47 continued to struggle with the datapad cord, Babs completed her slice.  Accessing the assassin droid's motivators, Babs put it into sleep mode.

"Bye bitch," Babs snapped as she winced, ready to get shot down by the remaining droids.

Enter Chuck Lannigan to the rescue!

The Stealthy Spinner used his ability to pass through walls and moved through the force screen, putting himself between the six droids and their target.  Noticing a pair of grenades on HK-47's hip, Chuck grabbed one and threw it at a cluster of the assassin droids.  Four of them were instantly covered in a terrible, corrosive gel that shorted circuits an dissolved armor.  From his perch, Arlo was ready to take a shot as well, launching a super-heated blaster bolt through one droid and into another.  Not to be outdone by her partners, Dr. Sybil used her "shatter" revision on two of the droids.  Lacking Force powers on Dantooine, the revision manifested as pointy words, causing the droids to topple over each other from the decimating banter!

After a few more shots the remaining droids were destroyed.

Babs Goldstein immediately took to disassembling HK-47, and turned the droid's scrap into usable cyphers for the party.  A pair of blast cyphers, a strange manipulation beam, and a strength enhancer could possibly be useful.

After clearing up the mess in the garden, the Estate agents moved to the central chamber in the monastery, where Sherlock Holmes was performing his Force power experiments.  There was a midichlorian study, where Holmes was trying to imbue his own power with the life forces of other creatures.  At another table was a crude, yet functional attempt at creating a lightsaber.  But the most important artifact was a massive array that could move a massive object, like the Ebon Hawk, from Dantooine to another recursion.  Essentially this array created a similar effect as an Inapposite Gate, which meant that it was risky to use, and the transported object would quickly lose its power as the laws of the new recursion would take over.

But it would give the party a shot.  With the aid of a Force Ghost Benedict Cumberbatch version of Sherlock Holmes, the two Paradox agents Dr. Sybil and Babs learned how to use both the array and the lightsaber.  Taking stock of the rest of their cyphers, the Estate Agents formulated a rather cunning plan and prepared for action.

Here's a look at "Plan GlueShankSplosion": 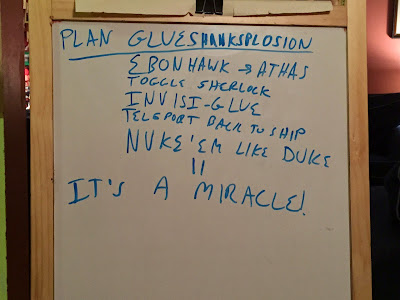 Once everyone was ready with their duties and roles in the upcoming operation, the Estate Agents formed a circle and had a bit of a "go sports team" moment.

The first step of the plan was simple: regain the Ebon Hawk.  This was the easiest part of the plan due to the nature of Dantooine.  All Babs had to do was translate the party back to Earth, and then translate immediately back to Dantooine.  Anyone translating to Dantooine appeared instantly within an orbiting Ebon Hawk.  Dr. Sybil grabbed the controls and landed the craft near the monastery, where the Inapposite Gate Generating Array was loaded.  Babs engaged the device, and with a shimmy and a shake the Ebon Hawk blinked out of existence on Dantooine…

… and reappeared over the City-State of Tyr on Athas!

Noticing the strange, unidentified flying object hovering above their city, the people of Tyr started to scream in terror.

"The Dragon has come!" the guards shouted.

But the passengers on the Ebon Hawk paid no notice, as they were busy keeping their balance in a rapidly descending craft.  Although the Ebon Hawk remained intact as it traveled to Athas, the Estate Agents all translated from their "Star Wars" foci to their "Dark Sun" foci.  Dr. Sybil was now Ka'cha, and thri-kreen are not natural star fighter pilots.  The insectoid paradox tumbled backwards as the Ebon Hawk pitched up, forcing Jackie Dingo to grab the controls.  Once the craft was stabilized, Dr. Sybil used her "reach beyond" ability to remember how to fly a starship.

"Are we doing this?" Dr. Sybil/Ka'cha asked the rest of her team.

With a nod, both Arlo and Chuck readied their gear and used a Transvolution Ring to create a gate connecting the Ebon Hawk's interior to the Sorcerer-King's chambers.  The Vector and Spinner had sixty seconds before the gate would close forever!  Going into stealth mode, Arlo used is chameleon skin to carefully enter the meditation chamber of Sorcerer-King Sherlock Holmes (the Robert Downey Jr. version).  The man was sitting cross-legged on a raised platform, humming to himself as his large head pulsed with power.  Incredibly (Jeremy rolled a 20!), Arlo was not noticed as he moved towards Sorcerer-King Holmes.  Grabbing a very powerful, permanent glue cypher from his satchel, the mul gladiator threw it at the king, sealing him to the floor below!

Enraged that his meditation was disturbed, and furious that he couldn't move his legs, Sorcerer-King Holmes started to monologue…

… but neither Chuck nor Arlo stayed to listen.  The pair of Estate Agents immediately turned and darted for the portal.  Thirty seconds to go!

Even immobilized, Sorcerer-King Holmes was dangerous.  Using his incredible psychic powers, the king tried to enter Chuck Lannigan's mind.  In an amazing display of mental fortitude (I think Andy rolled a 20 here… there were at least five natural 20's rolled in the last half hour of the game), Chuck was able to force Sherlock Holmes from his thoughts an continue running.  Both Arlo and Chuck got through the portal just as it closed behind.

So began the "Revenge of Babs".

From the fire-control station, Babs connected all of the Ebon Hawk's laser turrets and laser cannons.  The attorney screamed in rage as she directed thousands of blaster bolts into the palace of Tyr, destroying the structure, and causing it to collapse into the gardens below.  This was for her slain crodlu Zoidberg, and the love of her life, the Benedict Cumberbatch version of Sherlock Holmes.

But Sorcerer-King Sherlock Holmes was not finished… not yet.  From the rubble of Tyr's noble quarter came a small explosion, as a flying, psychic, Robert Downey Jr. soared into the sky, with a pedestal still glued to his rear of course. Flying right in front of the Ebon Hawk, the king was prepared to unleash an onslaught of psychic flame.

But Babs was faster on the trigger! (Emily rolled a natural 20 on initiative…)

Babs was also far more accurate than the Sorcerer-King expected!  (Emily rolled a natural 20 on her attack roll!)

At least fifty blaster cannon bolts pierced the Sorcerer-King's hovering form, shattering bone and pedestal alike.  As Holmes fell to the ground, Babs continued to fire with the belly turret, just to make sure.

Dr. Sybil/Ka'cha reminded the team that their time was limited.  The Ebon Hawk was starting to shake, as the force of the battle was hastening the vessel's power loss.  Born of a recursion of mad science, the Ebon Hawk was out of place in a recursion of magic.  Setting the craft down in an open field, Dr. Sybil/Ka'cha pulled Babs from her chair and assembled the team for one final translation.

It was time to go back to Earth.

"I don't know how you all pulled this off," Director Katherine Manners told her team of Estate Agents during the debriefing.

"We wrote it down," Jackie replied, pointing to the scrawled notes that Arlo took during the planning.

Arlo just smiled, leaned back in his chair, and shouted "It's a miracle!"


"If you spend enough XP Benedict Cumberbatch may come back to life." - Jeremy giving Emily emotional support based on her pile of 10 experience points.

"What is this?  A Level 5 Manipu-bladder?" - Jen couldn't read my handwriting.

"So the hardest part of this plan is getting that doohickey to work!" - Andy's character was not trained in doohickeys.

"Can't you use your Force powers to talk to Force Ghost Benedict Cumberbatch?" - Jeremy had a pretty brilliant idea… actually he had several last night.

"That seems like a lot of my death going on there…" - Andy didn't like any plans that involved his character playing a martyr.

"Iron Man these!" - Dr. Sybil rolled down the window and talked crap to the dying Robert Downey Jr. version of Sherlock Holmes.

"When we translate, do we see the ghosts of Robert Downey Jr. and Benedict Cumberbatch smiling at us?" - Yes you do, Jeremy.  Yes you do.


Want to catch up on all of the adventures of Babs, Chuck, Arlo, Dr. Sybil, and Jackie?  Here's our full list of adventures in The Strange!